Mini Coopers at the Olympics 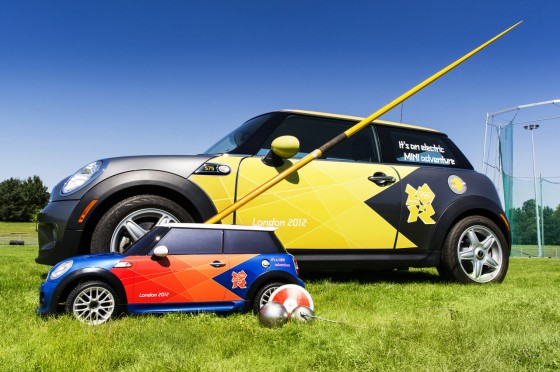 During tonight’s late night Olympic coverage, we noticed a mini Mini Cooper sitting along the sidelines of the discus event. Then sure enough, they showed it on-screen, as the judges utilized it for Discus transport :

We look to Autoblog for more information :

While the notion of using a Mini Cooper to retrieve thrown javelins, hammers, shot and discuses at the London Olympics might not seem like the world’s most natural pairing, we can’t ignore the inherent cheek and charm in using radio-controlled cars for an otherwise unremarkable chore.

Dubbed “Mini MINI,” these three electric R/C Cooper hatchbacks are rendered in about 1/4-scale – necessary to ensure adequate payload capacity for up to eight kilos (nearly 18 pounds). That’s enough carrying capacity to lug around a hammer, a discus, a shot or a pair of javelins. The cars’ large scale also helps them pack the larger battery arrays that Mini says are necessary to run them for 35 minutes (before being down for 80 minutes of charge time). The models are painted blue with orange Olympic livery and white roofs, and they even have working headlights.

Honestly that is one of the coolest instances of product integration that I ever remember seeing. I wonder if they’ll auction off these awesome electric Coopers after the games? Those aren’t the only Mini Coopers being used at the Olympics though. We found this video of Coopers being used as Fire Engines in the Olympic Park :