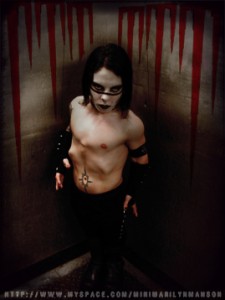 As a big Marilyn Manson fan, I discovered recently that there’s a mini version of him paying tribute. His name is Nic Reddy, 22, who stands 3’9″ and rocks audiences using Manson’s in-your-face theatrics. To me, that sounds like good ole’ fun, and I hope to catch his act soon. Here’s the interview:

Basically, your act is to be up on stage and lip-sync the Marilyn songs?

Nic: For now I lip-sync, I usually perform in small clubs or bars with no sound system and it’s just easier. I find that karaoke versions of Manson’s songs are shit and sounds like people made them on a keyboard you would buy from the toy store in 1985. One day I might go live if I can figure out an easy way to do it by myself.

Which songs do you usually do?

Nic: I do any song I’m in the mood for really. It doesn’t have to be one of Marilyn’s hits. I’ll do anything from “Tainted Love” to “Antichrist Superstar.”

Typically, how is the audience reaction?

Nic: People love it… I still can’t figure out why (haha) but it’s usually really die-hard Manson fans that appreciate Mini Manson the most because they know I’m a fan myself and don’t just do it for the money.

Were you in the Kiss tribute band with Terra Jolé? 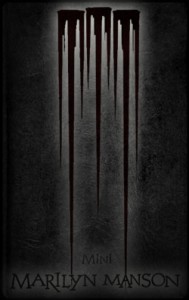 Nic: Yes I was, that was my first gig. I grew up a major Kiss fan so it was an honor to do that and work with someone with real musical talent like Terra.

Nic: I work at a night club called The Box in Manhattan. It’s actually where Mini Manson first hit the stage. Since then I do other performances there but no mini’s. I’m not going to run around as Mini Michael Jackson because someone tells me to.

Have you met Manson and what’s he say about your act?

Nic: I met Manson on his Rape the World tour in ’07. I think he was just as excited to meet me as I was to meet him. You never know how someone you impersonate is going to react so I was really flattered to find out that he shows people that there’s a mini-him running around.

How often do you play and where?

Nic: I only do Mini Manson upon request, I don’t feel the need to shove it down audience’s throats. I usually do a show about once a month but it really picks up around Halloween.

And here is some low quality video of Nic performing, as Mini Marilyn Manson: