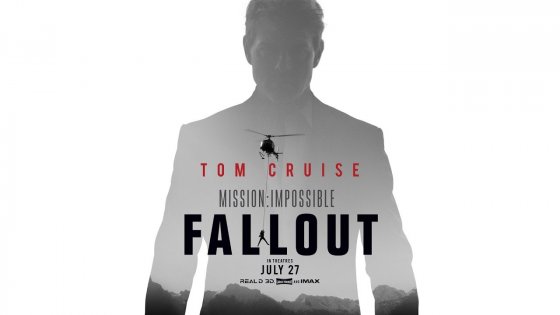 In January 2018, British television host Graham Norton featured the cast of Mission: Impossible – Fallout (which was still in production) on “The Graham Norton Show,” with a segment dedicated to a huge stunt resulting in star Tom Cruise’s broken ankle. It is then said writer/director Christopher McQuarrie left this take in the film, along with the continuing shot of Cruise picking himself up after the injury and hobbling out of frame. This is a metaphor for the kind of film Mission: Impossible – Fallout is: a testament to the dedication of those – both in the film’s world and in the real world – working beyond their capacities to get the job done. 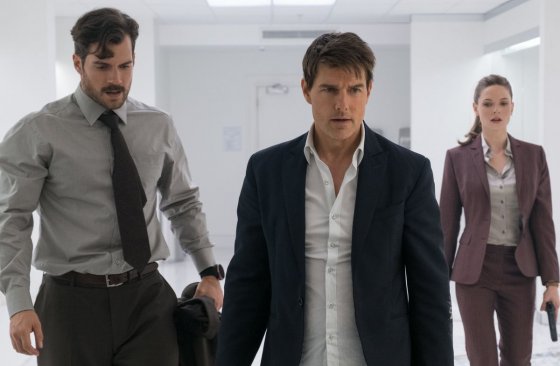 And boy, does it pay off. Just when you thought the high-flying Mission: Impossible – Rogue Nation couldn’t be topped – especially with its awe-inspiring pre-title scene – McQuarrie and company come roaring back to the theaters to blow us out of our seats. It’s a well-rounded, fully-balanced film, delivering as much in the story department as it does in its action sequences. Not only is the action quota fulfilled, the film also takes time to tie together plots and characters from across the J. J. Abrams/Bad Robot era, and it even includes a playful nod to the 1996 series progenitor (we won’t spoil that for you, but listen carefully to a character’s self-introduction). 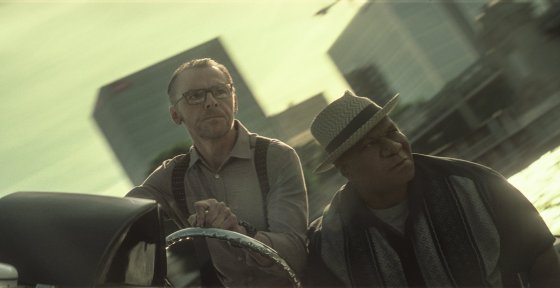 Sticking with the Bad Robot era’s characteristic sense of teamwork – as opposed to making Cruise’s Ethan Hunt an American version of James Bond – we’re slammed headfirst into a game with the highest of stakes. Three plutonium cores are out on the open market, and it’s up to Hunt and returning sidemen Luther Stickell (Ving Rhames) and Benji Dunn (Simon Pegg) to get them into custody. But when Hunt is faced with the impossible choice between losing a friend or the cores, the mission fails, prompting CIA director Erica Sloane (Angela Bassett) to override Impossible Mission Force (IMF) Secretary Alan Hunley’s (Alec Baldwin) authority, bringing with her August Walker (Henry Cavill). 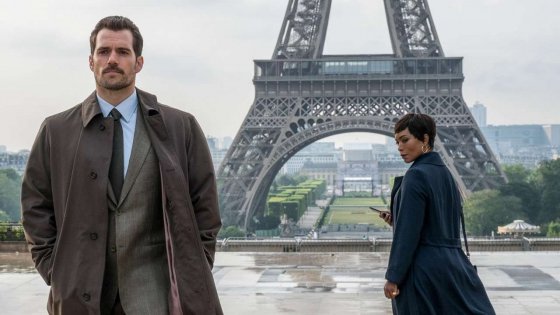 “You use a scalpel; I prefer a hammer,” Sloane says, comparing the IMF’s work to the imposing force implied by Walker’s towering physique. We’re given plenty of time to see Walker being Sloane’s hammer as he wades into a multitude of bareknuckle fights and brutal takedowns. There’s no sophistication, no suave confidence with him; he is pure, lethal power made flesh. None of Cavill’s wink-and-a-grin stylings are to be found here as he exudes a terrifying intensity capable of rendering his polar opposite – Hunt himself – speechless on several occasions. Cavill earns his place on the Mission: Impossible roster by being both physically and mentally formidable, not to mention downright scary. 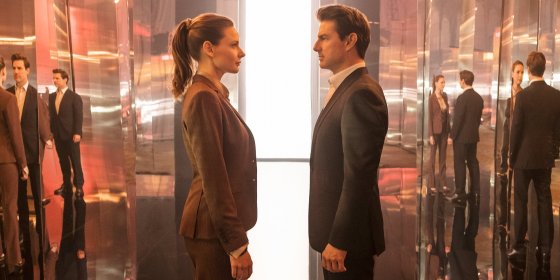 Once again, Hunt finds himself undercover and out of luck, even with his two capable tech geniuses backing him up. Two holdovers from Mission: Impossible – Rogue Nation drop in to dish out their own brand of trouble. Former members of terrorist group The Syndicate (now called The Apostles), once run by Solomon Lane (Sean Harris), are about to buy the missing cores, and disgraced – but not yet disowned – MI6 agent Ilsa Faust (Rebecca Ferguson) just happens to show up at the buy. Of course, this puts both of them on a crash course with Hunt’s IMF team, and ye gods… what an explosive crash it is. 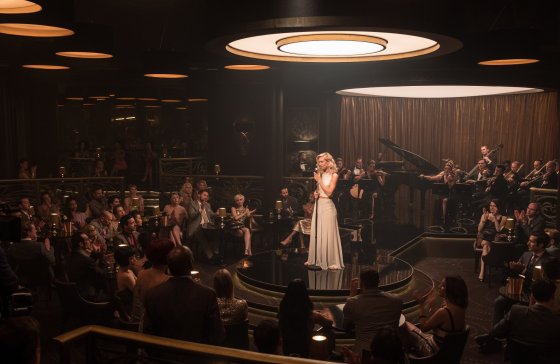 Mission: Impossible – Fallout draws its oomph from the best of the entire series: the original’s drama, the intricate espionage intrigue of the second, the love story of the third, and the amazing showmanship of the fourth and fifth. Up until now, the franchise has never had a returning director, but McQuarrie’s deceptively plain, no-frills style made Mission: Impossible – Rogue Nation repeatedly watchable and breathtaking. He returns with that same sensibility, choosing to let a cast and crew at the top of their respective games speak for themselves. There’s no self-aggrandizing slow motion; everything is shot and shown in real-time. There’s not an edit out of place, nor is the film overly cut; each shot, as lensed by Rob Hardy, allows you to appreciate the preparation and work put into bringing you one of the best action films ever made. 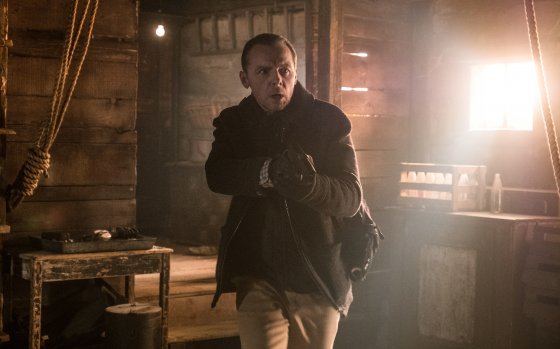 Let’s take, for example, the extremely dangerous HALO (High Altitude, Low Opening) parachute jump which takes Hunt from inside a plane to the ground in one uninterrupted shot. A similar sequence in the recent Furious Seven is chopped up almost as soon as the camera’s subjects are out of the plane and peppered with dialogue, having an intensity which is slowly defused with each successive edit. It’s not a bad sequence in Furious Seven, but McQuarrie – with nothing less than astounding aerial work from cameraman Craig O’Brien and the jaw-dropping holy-shitness of seeing Tom Cruise actually jumping out of a plane – shows you how to have intensity without cutting the film to shreds. With minimal dialogue, this sequence highlights the aforementioned “deceptively plain” approach McQuarrie has used in his two Mission: Impossible outings (and in his other collaboration with Tom Cruise, Jack Reacher). The action is there, fueled by bravura stuntwork and tangible practical effects; he has the good sense to let it be, captivating on its own without delving into superficialities or avoidable and obvious CGI fakery. 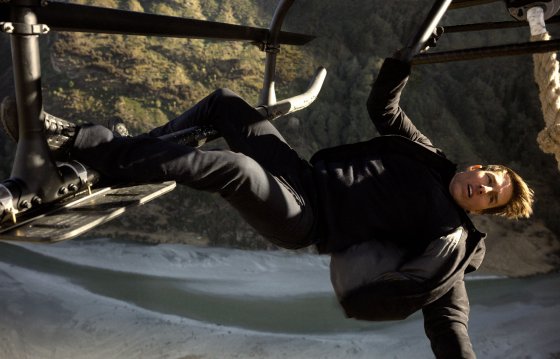 Ethan Hunt is written as a man who’ll stop at nothing to protect the world, even if it means losing his wife Julia (Michelle Monaghan) in the process. As the cornerstone of the Mission: Impossible film series, Cruise has never given less than 100% to his portrayal of the constantly-in-the-crosshairs Hunt, and he doesn’t stop now. But what both Cruise and Hunt do (at least in the Bad Robot era) is elevate the other performers and characters, almost daring them to run right alongside him and work at their best, and they don’t fail. Hunt is the point man, the tip of the spear; it stands to reason he’d be at the center of every confrontation and every explosion. Our eyes are on him as he figures his way into and out of every danger-filled mission, and Cruise commits himself fully to making Mission: Impossible – Fallout just another Saturday night at the movies. 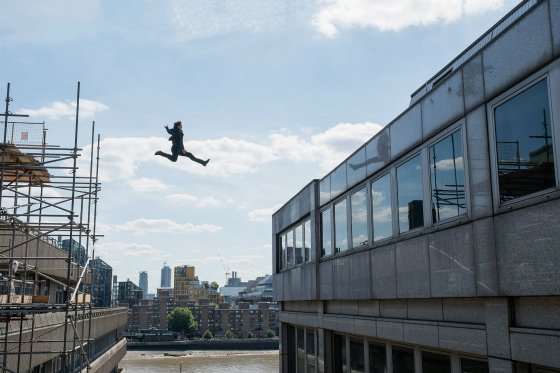 This is why we flock to the theaters day in and day out; to be pushed into a world we might never experience. To ride in the passenger seat as the camera takes us right inside a crashing helicopter, or to jump out of a plane into a bustling city below. What makes Mission: Impossible – Fallout different from your typical action movie is its lack of apathy or offhandedness toward its characters. It doesn’t take its characters for granted; it doesn’t show them as superheroes, either. Each one of them has one guiding principle above all else: to watch each other’s backs. To do that, they have to actually care, and successful films give us a reason to care for them just as much. McQuarrie’s script at once humanizes them and recognizes them for being the elite badasses they are – yes, even Benji, again brought to impish life by Simon Pegg – balancing their need to get the job done with the personal toll this life has wrought upon them. This is why Fallout stands with Rogue Nation as the best of the Mission: Impossible films, thanks to this unique mix of humanity, suspense, and outstanding action.

MPAA Rating: PG-13 for violence and intense sequences of action, and for brief strong language. (This marks the first time someone says “fuck” in the franchise.)
Running time: 147 minutes.
Released by Paramount Pictures.

Tom Cruise, and company come roaring back to blow us out of our seats with MISSION: IMPOSSIBLE - FALLOUT, one of the best action films ever made.