Sports > Baseball > Should MLB Do Away with the Home Run Derby?

Should MLB Do Away with the Home Run Derby? 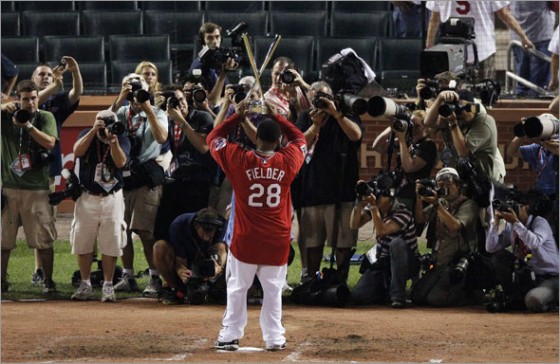 Earlier in the week, Major League Baseball with the help of David Ortiz and Prince Fielder announced the line-ups for the 2011 Home Run Derby set in Arizona for this year’s all-star game. The list included names such as Rickie Weeks, Matt Holliday, Robinson Cano, and Jose Bautista. There has been talk previously from fans and other pundits that the Home Run Derby has lost its luster and that the MLB should think about possibly taking it off the all-star festivities list.

The derby itself dates back to the 1980’s, when it was only a one round affair in 1985 in Minnesota. That contest was won by Cincinatti’s Dave Parker who slugged a grand total of six home runs to claim the title. Since then, Major League Baseball has experimented with different number of rounds, less outs, and this year, when they decided to name captains to help pick the teams.

It’s tough to make a contest like this more interesting and I see the point of some pundits who want to do away with the derby. One of the issues is that some of the best home run hitters during the regular season do not want to participate in the derby for various reasons. This year, Yankees first baseman Mark Teixeira declined his invitation since he wasn’t invited to the actual all-star game. There has also been talk that some have declined invitations in the past due to the fact that it could mess up their swing in the second half of the season.  Back in 1998, Ken Griffey Jr. almost declined an offer to attend the derby because of the upcoming Mariners schedule. To be fair to the derby, there are always going to be players who decline to participate in all-star related events no matter what.

Another reason tends to be the basic length of time it takes for the derby to be completed. In the past two seasons, both home run derbies went past the three hour mark and it wouldn’t surprise me that some decided to tune out because of the length of time it takes to crown a winner. Sure, watching home runs go out for the first thirty minutes is fun but can it really be interesting to watch it over and over again. However to note, that theory has been debunked since the 2008 derby was the highest rated program of the night and both 2009/2010 were in the top five of cable programs viewed.

I’m personally for the home run derby but wouldn’t mind seeing some changes, maybe an elimination of a round or a running clock to try and speed up the competition; so we can get to the important part, the duel for the trophy. Hopefully, we’ll see some memorable moments in this year’s home run derby and we might not have to hear the possibility of seeing the derby hit out of the all-star celebration.