I first heard the news via Twitter. I’ve been neglecting my duties as a blogger and comedian for almost a month now. Tangled in the holidays, I haven’t even been keeping up with all of the crazy MMA news/rumors floating around. Until my old partner from HammerFisted.com, Greg Webb (also writing for Gunaxin) asked if I heard the good news about my boy Villante. 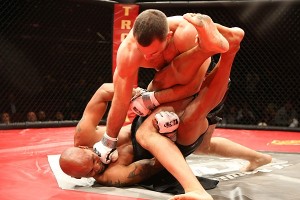 "What's that? Speak into the microphone"

It’s not a joke or exaggeration that Gian is “my boy.” He is. And my boy just signed with Strikeforce for a multi-fight deal that starts with Chad Griggs on Feb. 12th. We have hung out together and threw back a few beers, I used to see him when I was credentialed at Ring of Combat (he was especially eager to talk to press about his friend Chris Weidman,who is also an up-and-comer out of Long Island). Honestly, Villante and I have at least felt each others presence since 2000 when we were playing against each other in lacrosse. Villante and I went to different high schools in the same small suburban town known as Levittown. We both took faceoffs and even got into a few pushing matches during a heated game… where I may or may not have taken a swing at the champ and he may or may not have punched my “face off” in retaliation.

I’m not going to act like we were each others’ personal rival. I’m pretty sure he didn’t know I fucking existed until he started seeing me at Ring of Combats with a familiar face and press passes. I mean, come on. Gian was a varsity lacrosse player, starting All-State fullback/linebacker on a championship football team and an All-American wrestler in high school.

You know what I was? Drunk.

A funny story that I remember from Villante’s high school days… when he was a senior and I was a junior (circa 2003) a talented running back named Nick Tintle (who ended up being captain of the UNC Tarheels lacrosse team) came up to varsity for the MacArthur Generals of Levittown. I remembered reading in the newspaper… not the town tribune, but the Daily fucking News… Villante was interviewed about changing his position to fullback after having a stellar season as tailback as a junior. Villante’s response was very similar to “It’s cool. As long as I get to smash someone in the mouth and Nick breaks for a touchdown, I’ll be okay.”

Again, not exaggerating. After that, Villante went to Hofstra where he spent five years playing middle linebacker for a no-longer-existent football program that produced greats like Wayne Chrebet and Marques Colston. It was rumored Villante would be drafted to the NFL and to be honest, knowing him, I wouldn’t have doubted it.

One thing I always wondered was how he would fair as a professional fighter due to his wrestling background and “stories I’ve heard from the playground.” Well, he must have had the same vision that I had because he is now a 7-1 professional fighter and has never gone to a decision in his eight matches. He has five TKOs, two submissions and only one of those seven matches even made it to the 2nd round (and only 1:25 into it). His only loss came as the result of a horrible arm injury he suffered during the match. If I’m not mistaken, Villante was also fighting at 205lbs. for the match.

All homerism aside, this kid might be the real deal.

On February 12th in East Rutherford, NJ, Villante will have to prove he is the real deal in his own backyard (neither of us like to consider New Jersey as our backyard but until New York smartens up and legalizes MMA, it’s all we have). Villante will be going against another heavyweight prospect for Strikeforce in a reserve match for their highly-anticipated Heavyweight Grand Prix. Chad Griggs was a heavy underdog to Bobby Lashley and probably ruined many of Strikeforce’s plans for the huge black man with a name lathered in star power. Griggs spoiled that and wants to prove he’s a contender, touting a 9-1 record with eight KOs. The hard-hitting Griggs got Lashley TKO’d out of “retirement” in his Strikeforce debut.

It is a pretty even match for Villante and he definitely has a chance to win. He’ll probably come out as the underdog but the two fighters will be very similar in weight and it could prove to be a pretty cool fight to watch on an already-stacked fight card.

I’ve read a lot of articles and stories on fighters who had to overcome insurmountable odds and have stories of poverty, physical disadvantages and blah blah blah. You know what? It’s about time you just had a humble, All-American dude who likes to “smash people in their mouths”  as the nice story of choice.

Go get em, Gian. And remember what Tony Montana says…