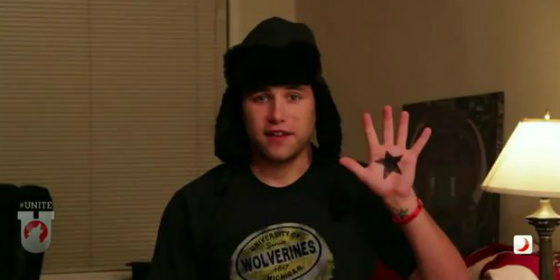 In the last week, two groups have released very similar videos doing humorous impersonations of college football fans. Only one of them was successful. We are going to show you both as an object lesson in how to be funny.

In format the videos are almost identical, with a single actor standing in front of the camera delivering one-line “impersonations” of members of a college fan base.

The first video comes from UNITE, a show on ESPNU, and features schools like Florida, Notre Dame and Florida State.

The laughs come easily with this video. Each impression rings true to the general perception of the fans of each school, while not being overly offensive.

Compare that with this video, which is one of a series from popular YouTube channel The NOC.

Even approaching the same subject, in the same way, this one fails to deliver a single laugh. The jokes aren’t funny and don’t seem related to the actual fans of the school. Also, this one gets points off for not know that Deliverance took place in Georgia, and no self-respecting SEC fan would watch a movie set in a rival state on game day.

To be fair, they did tackle a specific conference, which gave The NOC less variety to choose from. Let’s see how they did with their PAC-12 video.