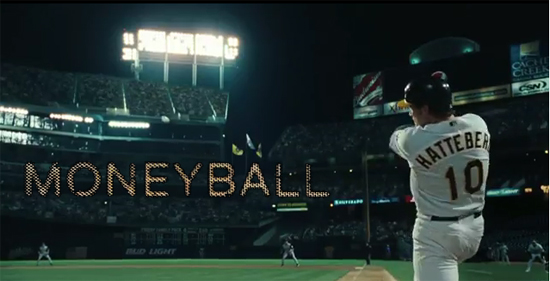 It took a while, but Moneyball finally got an adaptation. This review might be a little different from others by sportswriters because I must admit that I have never read Michael Lewis’ book that was the basis for this movie. I am, however, familiar with general manager Billy Beane (played by Brad Pitt) and his acceptance of new thinking to win games. This can be something positive though, because I won’t be constantly comparing to “how they did it in the book” since that can get annoying.

To give you a quick summary of Moneyball, it covers the Oakland Athletics during the 2002 season and how they tried to recover from losing their best players to free agency after a dismal loss in the 2001 postseason. Beane is feeling pressure but can’t convince the owner to raise the team budget, an amount significantly lower than the big market MLB teams. Beane meets Peter Brand (Jonah Hill) at a visit with the Cleveland Indians, and after hearing Brand’s theories about buying wins instead of players, Beane decides to try out Brand and his ideas by bringing him to Oakland. The film follows the season of the motley crew in Oakland and the arising conflict with skipper Art Howe (Philip Seymour Hoffman) and the scouts who rely on experience and gut instincts.

Although I didn’t read the book, I still enjoyed Moneyball as a fan of baseball and sports movies in general. It wasn’t hard to follow yet it wasn’t dumbed down, which I’m sure some people were concerned about. The concept and reasoning of Brand’s strategy is easy for anyone to grasp: players need to get on base in order to win baseball games.

Pitt and Hill did well in their parts; their chemistry was solid and the characters built a confidence in each other and their goal. Nothing was forced and the motivational parts were thankfully not corny. I felt like there wasn’t really a lot of dialogue to build that kind of relationship in some parts. A lot of reactions for Beane just consisted of him breaking stuff when something went wrong, and it happened a lot. At a point, it reminded me of that scene in Walk Hard (for the five of you who saw that) when the main character breaks all his stuff to the point of angrily clipping off flowers and bending silverware one by one. It got old.

The only thing I really disliked about Moneyball were the scenes with Beane interacting with his daughter; they felt awkward and I’m still not completely sure why they were in there. Most likely, they were included to access a bigger audience, but I was rolling my eyes every time. Get back to socking dingers, dammit!

Besides that forced father-daughter subplot, nothing else was injected with saccharine like the other movie based on a Michael Lewis book, The Blind Side. If you don’t know who Billy Beane is or the significance of the Oakland Athletics, you can still enjoy the film as a tale of success that no one saw coming. It’s very appropriate that Moneyball, a story about a disadvantaged team getting to the same level as its richer opponents, was released right as MLB had one of its most amazing wild-card races ever. It’s marketing at its finest.