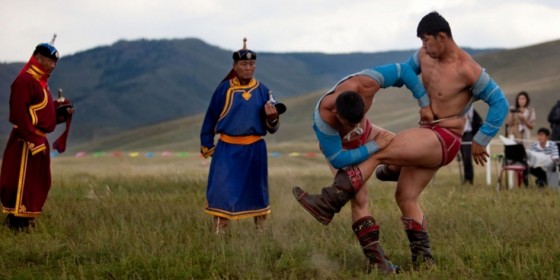 Seated on a grassy field in the afternoon light, a panel of serious looking judges survey the competitors before them. Half a dozen bare chested men, feet planted squarely on the ground, stretch their muscles and roll their shoulders, some, adjusting their outfits.

And how striking they are! Pink cropped jackets are fastened loosely with string over the men’s stomachs, and below, cling snug blue briefs. Calf-high leather boots and a four sided pointed hat completes the ensemble. To an outsider, it seems oddly incongruous to the men’s broad shouldered and fighter honed bodies. For these are Mongolian wrestlers: practitioners of a set of techniques, thousands of years old known as Bökh, or ‘durability’. 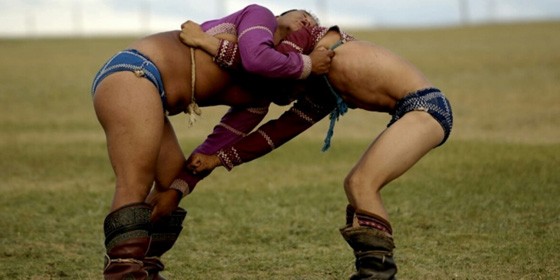 Nicknamed one of Mongolia’s “three manly sports” (the others being archery and horse racing, san saddle, which girls and women now participate in), wrestling is to Mongolians what soccer is to Brazilians. So much more than just athleticism, wrestling here, embodies the traditions of Mongolian culture as far back as Genghis Khan. The ruthlessly successful 13th century conqueror encouraged his men to stay battle ready through training in what was then, a military sport. Even further back, cave paintings have been discovered in the Bayankhongor region of Southern Mongolia dating from 7000 BC, which depict men grappling in front of crowds.

And while the country is changing at an increasing rate, wrought by a mining boom attracting big international investment, little has changed within Mongolia’s wrestling heritage. This month, it’s Naadam (‘game’ in English), Mongolia’s annual sporting festival, which celebrates all three traditional endeavors. But it’s wrestling in particular that draws the crowds. 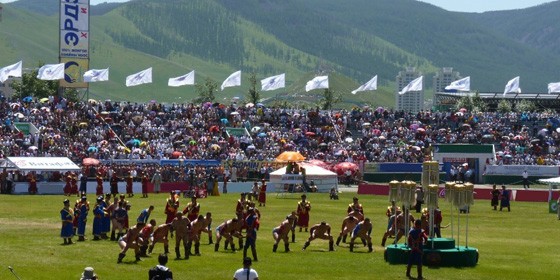 “Wrestlers are the ideal Mongolian men, given our history of being warriors,” explains Lkhagva Erdene, the Executive Producer of Mongol TV, which covers the games every year. And it takes a lot of work to live up to the expectations of a nation.

“Most wrestlers are in their training camps now. They are forbidden from talking to family or friends during the intense weeks before Naadam, and they will not talk to strangers; it’s bad luck for them.” The hunt for Mongolia’s top wrestler began on July 11th, the start of Naadam and Mongolia’s Independence Day. It was decided over three days. Preliminary rounds are held on a smaller scale in the countryside, in a provincial stadium or even an open field. The finals are held in the National Sports Stadium of Ulaanbaatar, the capital city. 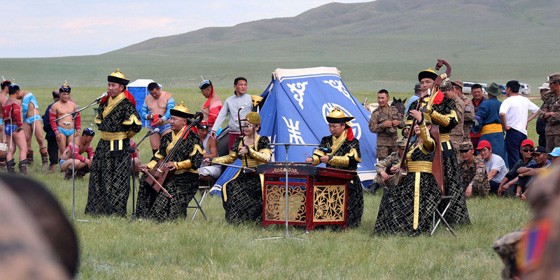 Batbileg Munkhtur trains with national wrestlers from all over the country. “What’s unique about Mongolian wrestling for me is there are no weight categories and almost unlimited time for the competition.”

Whether skinny, fat, short, tall, young or old, fighters can be paired with each other. Each round is a knockout, with the winner moving forward and the loser being eliminated from the competition. The rules themselves are very simple: the first man whose back, bum or knee touches the ground, loses. Hitting your opponent, gouging or strangling him is forbidden. Naturally.

“Techniques wise, they can be as sophisticated and elegant as judo.” enthuses Munkhtur.

Grappling holds, leg sweeps, throws and counters can see a man weighing more than 350 lbs lifted cleanly through the air, spiraling over an opponent’s shoulder before being slammed onto the ground. However, the ceremony begins with a little more grace.

Each wrestler performs a short eagle dance (“devekh”) around the flag of Mongolia, followed by a few slaps on the thighs. Imitating an eagle has it’s origins in shamanism, a form of spirituality still alive in Mongolia despite the spread of Tibetan Buddhism in the 16th century. The symbolism of the fighter’s dance represents power and elegance. The thigh slaps indicate the wrestler is ready. Then, with hands gripped tightly onto each others arms, the fight begins.

Renown wrestlers, and those who advance to the higher rounds, also have a zasuul, or “fixer”, who acts both as a motivator, and the fighter’s hat holder during his rounds. Whilst there is technically no time limit, one of the zasuul’s roles is to slap the buttocks of his fighter, if he is deemed to be taking too long. Sometimes eliciting a friendly laugh from the crowd, it seems to do the trick.

As the games progress, wrestlers will begin to accumulate titles. The lowest rank awarded is ‘the Falcon of Sum’, and the highest is ‘Giant’. They get longer as fighters win more victories, with additional reverence being added. For example, a ‘Titan’ can become an ‘Invincible Titan’ and even an ‘Invincible Titan to be remembered by all’. 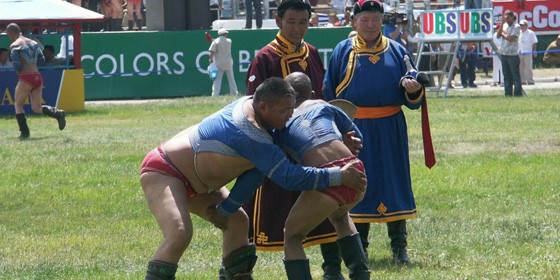 Munkhtur also stresses the importance of tradition, “Mongolian wrestling is embedded with a lot of cultural aspects.”

Indeed, the hard and fast of training in the physical techniques of grappling is still coupled with the old legends. Even the wrestling uniform is explained through folklore. The story goes that the reason for the frontless jackets is that there was once a skilled champion who remained unbeatable in many regions. Eventually, the other fighters discovered that their opponent was in fact a woman! Ever since, wrestlers have had to compete bare-chested, to avoid such duplicity occurring again. 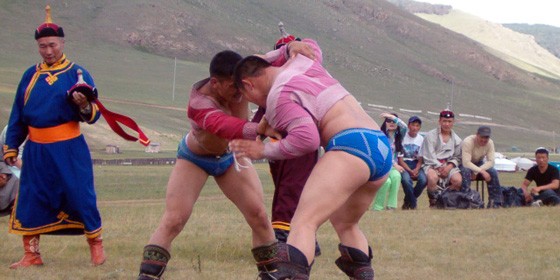 It seems unthinkable that this remembrance of Mongolia’s past, both real and imagined, will ever change. Yet the balance of ancient and modern in Mongolia is clearly starting to shift. More than a decade-long mineral boom has introduced a taste for Western pleasures to one of the most sparsely populated countries on Earth. Shiny Louis Vuitton and Chanel stores glint invitingly in Ulaanbaatar. Many tour companies now give quotes for their travel packages in $US rather than Mongolian Tugriks. And even for wrestlers, there’s the chance to get a slice of the burgeoning wealth within their country. Becoming a champion can be a gateway into politics or a lucrative business.

All this goes on every year, largely overlooked by the Western world. Indeed, Americans seem to have largely forgotten the immense Asian nation, nestled between Russia and China. At 1.6 million km², Mongolia is nearly as large as Alaska. Apart from a brief spike of interest in the 1920’s, when American Paleontologist Roy Chapman Andrews, said to be the real life inspiration for Indiana Jones (fewer hearts being ripped out and more dangerous encounters with bandits and wild beasts) discovered the first dinosaur eggs buried in the Flaming Cliffs of the Gobi Desert. Across America, a dinosaur craze ensued, and Mongolia was put on the map. Briefly. It’s time to take notice again. 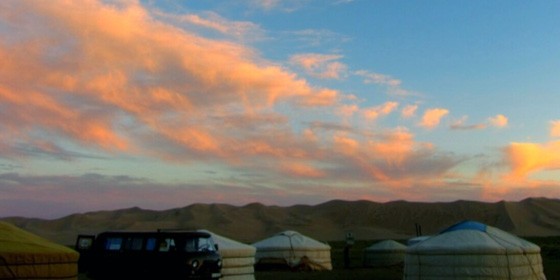 Open to the Western world since 1990, the “Land of Blue Sky” is one of the few places on earth where travelers can still glimpse the lives of true nomadic peoples. It’s so called because there are said to be about 250 sunny days throughout each year.

Make the most of the clear weather and head out of Ulaanbaatar. US passport holders don’t have to pay for a 90 day tourist visa, which is more than enough time to explore the far corners of the countryside of Mongolia, where the diversity can be extreme. More than just rolling grassy steppes, there are the sand dunes of the Gobi Desert, the permafrost ice valley in Yolyn Am and the thick forests and lakes of Khövsgöl, the “Switzerland of Mongolia.” 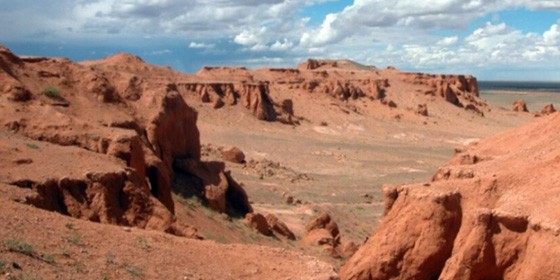 Despite all the talk these days of the world getting smaller, that sense does not exist in Mongolia. In a country so large with only 2.8 million inhabitants, you could drive for the better part of a day without seeing a single other soul. With such little light pollution, and hardly any evidence of human construction marring the horizon, the sky became truly vast. By day, you’ll never have seen a sky stretching out so far. At night, the stars blaze undimmed by any obfuscation.

For those of you who fancy your chances, the countryside is also the place to try your hand at Mongolian wrestling. Just remember to tell any tour companies back in Ulaanbaatar that you’re interested, whilst asking for package quotes. All participants must be registered in advance. 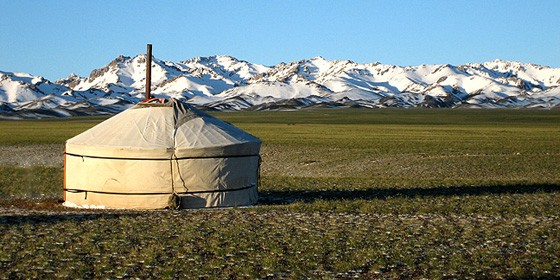 Yes, sure, there is a lot that’s unique about Mongolia. Throat singing, staying in yurts (called gers) with nomads and shamanism are all big tourist draws. But, unlike those more exotic pursuits, there’s something about close contact competitive fighting that is so much more elemental. Just look at the huge interest in the West in MMA and boxing matches. Somehow, that makes wrestling more relatable.

So what does Munkhtur think will be occupying the thoughts of every Mongolian wrestler right now? “Rank. Rank is in their minds.” He explains that a wrestler’s title can only be decided by the hotly contested bouts of Naadam, and not in any other competition. Once earned, they last for life. And now that this year’s games are over, thousands of wrestler’s hopes will spark again. Maybe next year will be theirs. 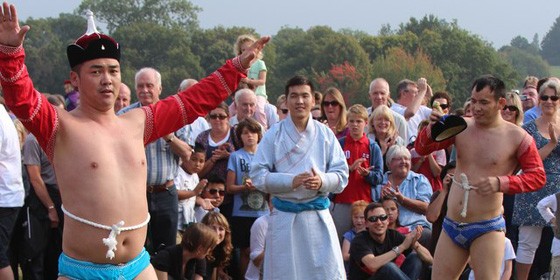 Maybe next year will connect them to nine thousand years of history, as they simultaneously become a new face of modern Mongolia.