Kenneth Anthony Repke, a 54-year-old Fraser, Michigan native, was arrested and charged with misdemeanor assault and battery after allegedly striking a female friend in the head, breaking her glasses. The fracas ensued when the friend refused to part with Park Place and Boardwalk during  a game of Monopoly. Let me repeat, bitch wouldn’t sell Park Place and Boardwalk. Maybe someone should inform Repke that the key to winning is to acquire the orange and red properties, not Boardwalk. Somebody always spends all their cash buying that ritzy property, then has no money left to maintain it (and then no one ever lands on it). No word on whether Repke was wearing a wife beater.

Hope he at least took this with him… 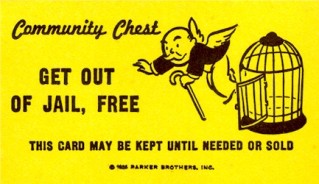 Here’s a local news story on the incident: