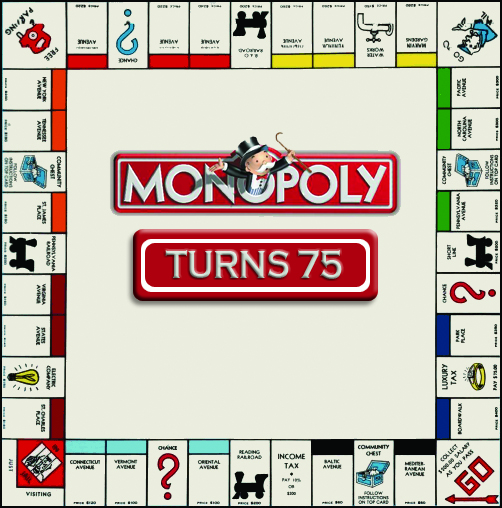 Who doesn’t love Monopoly? Hours spent seething over a game, selfishly hoarding all the properties you can -‘Monopolizing’ if you will- and controlling your money like some kind of cartoon millionaire. So far removed from reality, yet at once satisfying knowing that greed this all-encompassing should be savored. And what true fan of Monopoly doesn’t, at least once, wonder aloud, “Dontcha wish this money was real?” Yes, Monopoly, where would phony Capitalism and a quick two-hundred bucks around the ‘Go’ space be without you.

Well, our favorite board game based solely on property ownership and sadistic greed officially turns 75 this year. I couldn’t find any real solid information on a month, specifically, but according to the long and rather interesting read at Wikipedia, it did hit the store shelves in 1935. But you’ll have to read through quite a bit before you get to that little nugget, as it seems a whole lot regarding different versions of the original were bouncing around before a straight forward game actually got sold to the public. Seriously, sit back and take a read, it’s a strange little journey.

Soon, sixty years later in 1994, the game had become so popular that everyone wanted a little, silver piece. So companies and famous names began adding their own little touches to the play without deviating too much from the original. Eventually, everyone from Coca Cola to Disney had their corporate mitts in the Monopoly ‘dough’ and the licensing craze really took off. Now, I’ve have managed to gather together a mere 50 of the various and different versions of the Monopoly games available, but there are literally hundreds that you can check out here. Which brings us to the real point of this little celebration: the pictures! Take a second and rifle through 50 different ways you, too can experience Monopoly on its birthday!