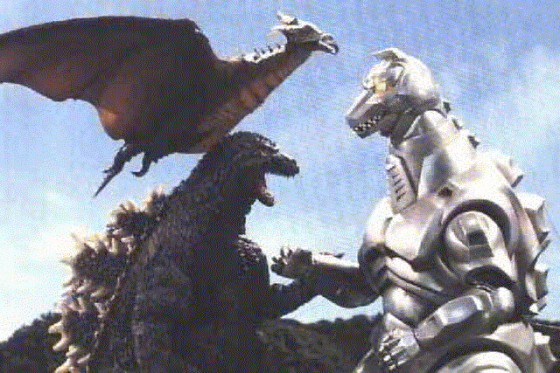 We here at Gunaxin love us some NCAA March Madness. It’s a boatload of amazing college basketball in a tournament the likes of which are rarely seen outside of it. It’s amazing, it’s huge, and it certainly accounts for not only gobs of cash lost on ‘Bracket-ology’, but also numerous work hours as guys hug barstools and Barcaloungers praying for their picks. But what if -just suspend disbelief for a moment here- what if the tourney wasn’t about basketball teams. What if March Madness was all about the fate of the planet itself…

A thunderous quake rattles the very ground on which we stand. The sky explodes with echoing keens and guttural calls. Nature herself bursts into plumes of flame as the ground is torn to craggy shards. Then, from the dust and fog comes a mass of the most terrifying, most hideous, creatures humanity has ever laid eyes on. Whence come the Monsters!

But, even as we scurry like so many insects in the wake of these titans, someone shouts to the beasts that it appears humanity might just be spared after all. Yes, for it’s not us these horrid demons want, it’s each other. The battle begins. Monsters of every shape, style, and type; with horns, fins, spikes, antennae, claws, wings, hooks, lurch into the fray. Weapons glowing every conceivable color blast from mouths, horns, eyes, and spines and smash with a cacophonous, ear-splitting discharge that burns air itself. But you know what? It would be so damn cool to watch.

And then, as we begin to realize that this battle might just be something worth picking sides for, we collectively come up with a bracket that might just look something like this: 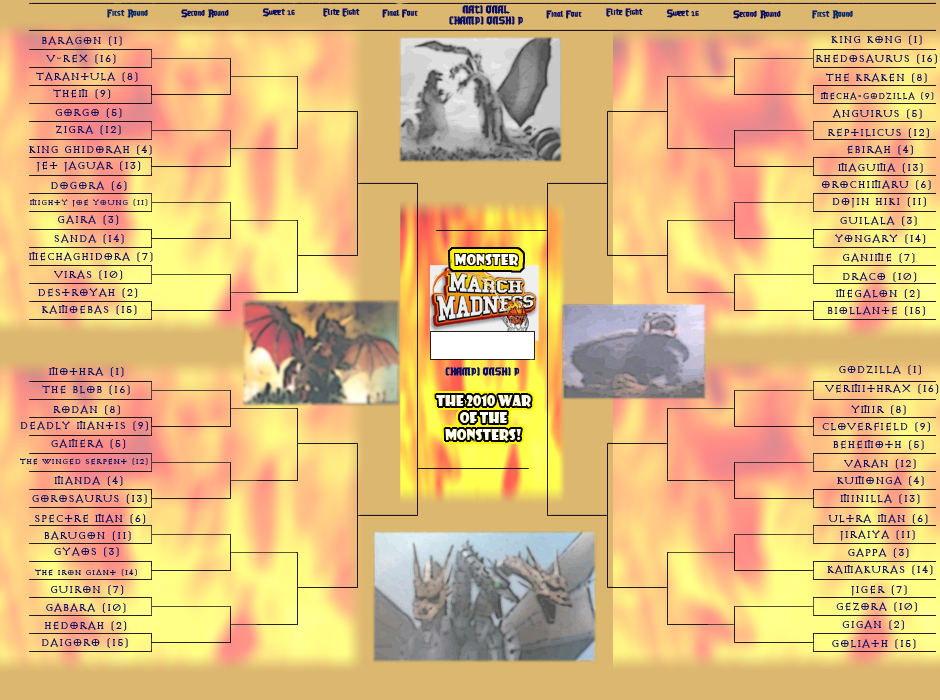 And of course not everyone will recognize all of these killer beasts. Fortunately, that’s what Wikipedia is for. Specifically, this entry. It’s not like any of these humongous creatures are wearing name tags, but it’s a good idea to be able to match a face with a name, ya know? And so the war wages on…

Luckily, as each monstrous beast falls, his or her body is immediately zapped off to another dimension or else there’d be massive carcasses all over the place. There are always winners and losers, and there are always those who live to fight another day. The brackets begin to adjust, and the second round begins like this: 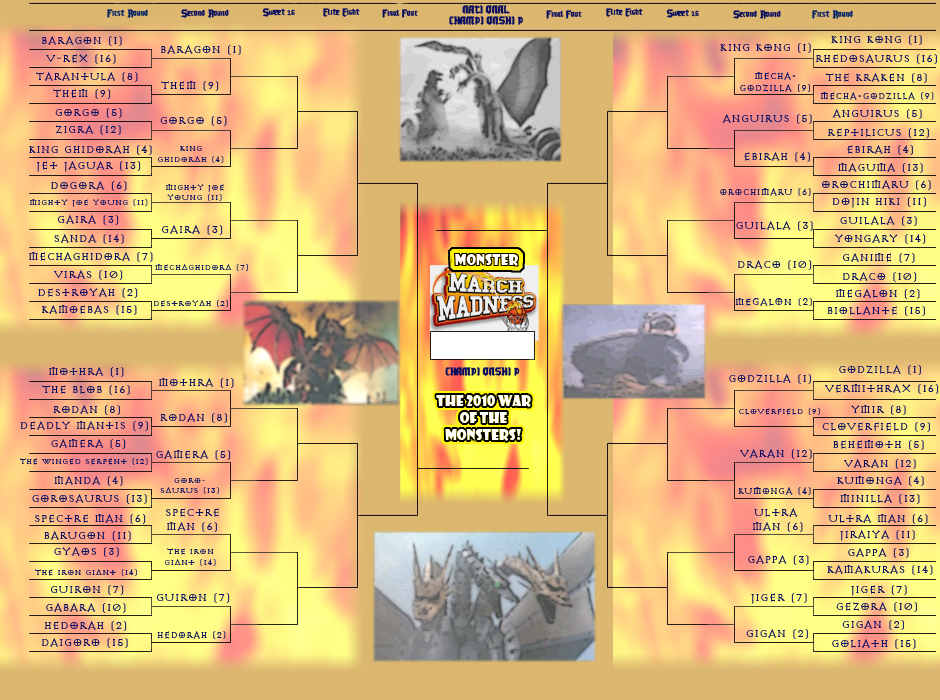 The day marches on and it will be one that will live in historical infamy. Favorites fall. If there can be such a thing as a favorite giant battling beast, that is. Vermithrax the dragon falls prey to the king himself, Godzilla. The Kraken finds its own life cut short by Mecha-Godzilla. Rodan practically eats the Giant Mantis, and the huge ants called Them bury the over-sized Tarantula. It’s a vicious battle, but we, as humans, have grown to treat it like a WWE wrestling match and we love it all too much. 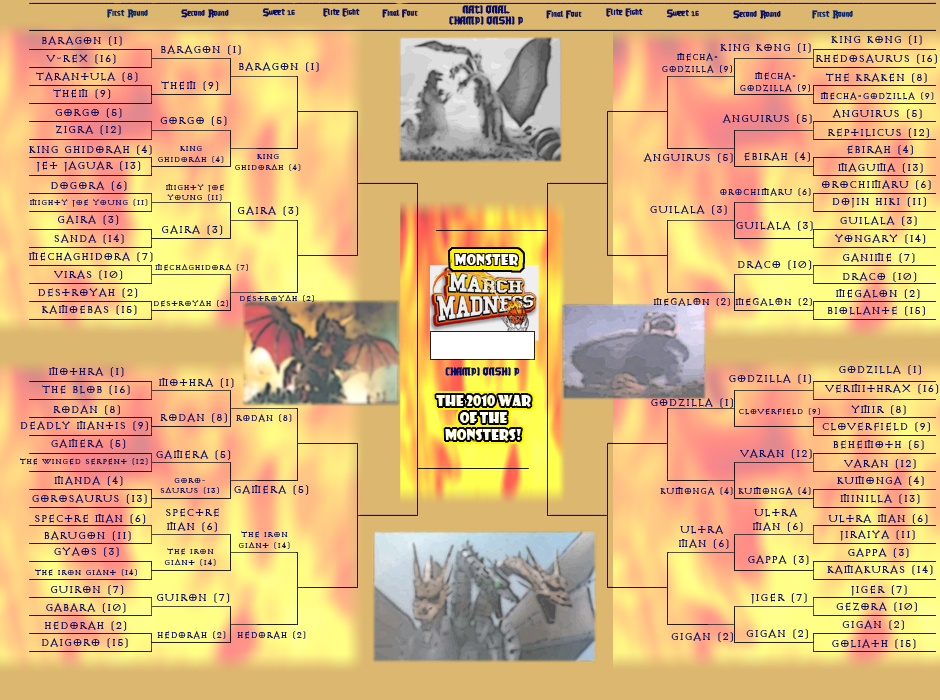 Ah, but then we come to the proverbial Sweet Sixteen. And oh how the mighty have fallen. King Kong goes down to Mecha Godzilla. As hard as it is to swallow, especially to his Skull Island fans, he was just no match for a fully robotic Uber-Zilla with enough firepower to smoke a city. Sorry Kong fans, but even the best of us can lose eventually. 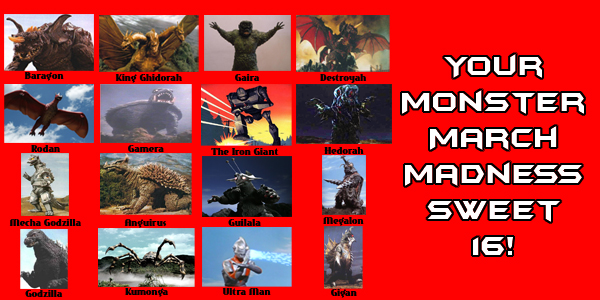 Tune in next week as we determine who should win! The top 8 will advance! Let’s get bloody!

Click HERE for the results, and the Road to the Final Four! Grrr!