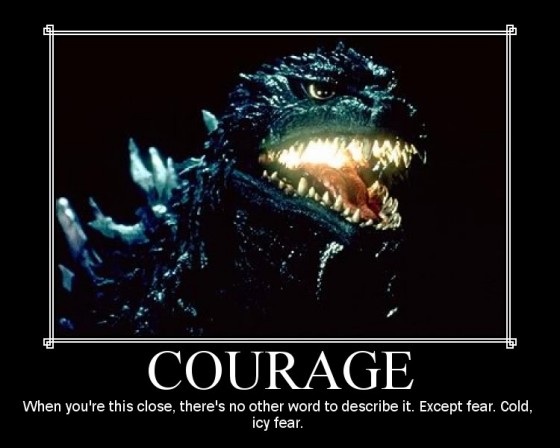 For those of you who read and voted on the first round of Monster March Madness, you know the Sweet 16 was riddled with upsets and even a human! Yes, Ultraman is, for all intents and purposes, a man! Well, the next round has begun and he may not be long for this world. Here are the brackets as the appear after the first round just as a refresher: 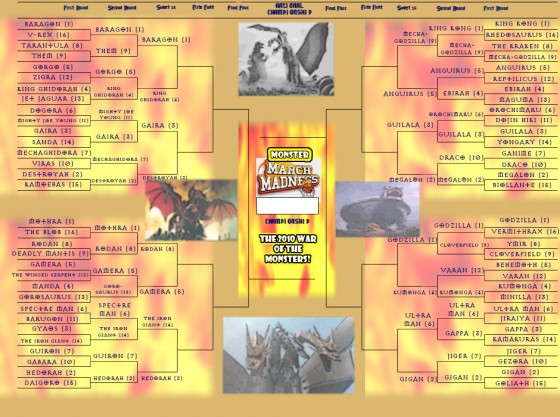 So, thanks to the fifty or so of you who voted in the first round, I was able to move ahead nearly all of the winners from that poll. Unfortunately, a few were not voted at all, and two of those happened to be in a round against one another. I had to ask them to fight it out, an here’s what we got: King Ghidora Vs. Baragon

Further on into the top sixteen battles, we have the epic contest between Gaira and Destroyah. Well, Gaira made a heck of an entrance, but his minimal strength and lack of versatile breath weapon allowed the far stronger Destroyah, well, destroy him in the end.

Now, a far closer match-up came about when the Terrifying Pterodactyl took on the Terrible Turtle in the woefully short lived battle, Rodan Vs. Gamera:

Once the dust cleared from that slobber-knocker, the next two combatants could scarcely keep from strangling on another! But, to the victor go the spoils, and the Iron Giant defeated the lowly Hedorah.

The battle of Mecha-Godzilla and Anguirus seemed like a match made in March Madness Heaven: a number 9 seed versus a number 5 seed! The grounds were set and tis is what the footage looked like after the Mechanical Menace took the day:

Guilala agains Megalon seemed good on paper, but when the fin-horned alien, Guilala made his appearance, Megalon instantly looked defeated. And that look became a battle reality.

Ultraman versus Gigan? According to SportsCenter this was going to be all Gigan. But what the analysts seem to forget as that Ultraman’s job is to destroy monsters just like Gigan. He is a protector, and he made his fans happy in the end. Ultraman!

The final match of the Sweet 16… the ten o’clock game, if you will, was over nearly before it started. Godzilla was out to a quick lead scoring three-point breath weapon shots from outside the arc, and landing plenty of tail-sweeps from inside the paint. It was just too much for Kumonga’s eight legs and he finally succumbed to the Monster King.

And with that, here is what your Elite Eight has shaped up to look like: 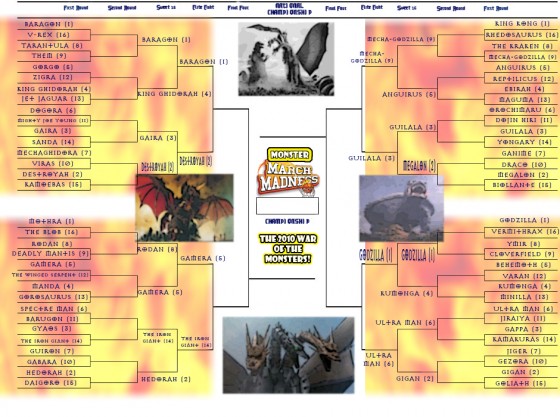 With weary monsters, a ravaged city-scape, and precious few humans remaining in the area to record the battles, the surviving Eight Monsters set up to fight once again.

Match 1: Baragon Vs. Destroyah. Fortunately, we were lucky enough to garner footage thanks to a satellite feed. Here is your match. Sorry about the commentary, it sounds like… children?:

Match 2: Gamera Vs. The Iron Giant. Though Gamera’s thick, seemingly impenetrable shell likely deflected many of the Big Machine’s blows, The Iron Giant’s mechanics and arsenal of weapons was just too much in the end. Advantage: Giant.

Match 3: Mecha-Godzilla Vs. Guilala. Much like the previous battle, The Mecha One surprised Guilala with far too many weapons and various death rays. Guilala fell valiantly in a terrific battle.

Match 4: Godzilla Vs. Ultraman. Though Ultra’s persistent peskiness kept Godzilla on his heels for the first twenty minutes, it was only a matter of time before the far older, senior giant lizard dropped the hurt and finished Ultraman for good.

And now, it’s time for you to vote one last time. But first, a look at your Final Four: 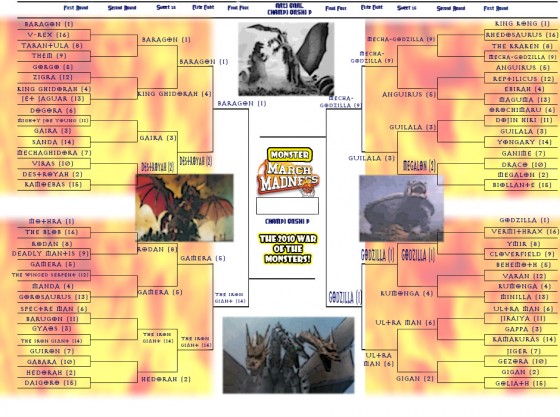