Sports > Football > Monsters on the Sideline

Monsters on the Sideline 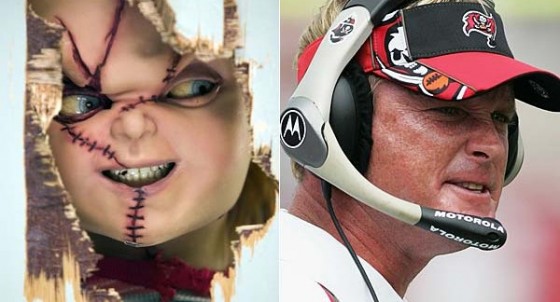 Watch any NFL head coaches tromp up and down the sidelines and they can seem monstrous at times. Look closer though and some coaches start to resemble some of the most famous monsters and evil creatures from movies and legends. With Jon “Chucky” Gruden currently terrorizing America from the Monday Night Football broadcast booth we decided to take a look to see which coaches share traits with some of the scariest denizens of your nightmares.

Andy Reid is this season’s best example of the famous mad scientist. After spending this offseason picking up parts from other teams and the NFL graveyard Reid’s job was to breathe life into a long-suffering Eagles franchise and take the juggernaut to the Super Bowl. Sadly for Philly fans, the franchise shares the same fatal flaw as Frankenstein’s monster, a defective brain.

Ever since Dolphins owner Stephen Ross flirted with signing Jim Harbaugh last spring Tony Sparano has been nothing more than a dead man walking on the Miami sideline. The best he can hope for is that he can feast on the slower and weaker teams in the NFL to build his résumé prior to the inevitable head shot.

Believe it or not, this isn’t a fat joke. The Blob comparison is apt though when looking at Rex Ryan’s ego. It slowly sucks up any attention focused on the team, growing larger and larger as time goes on.  The only way that we have seen to defeat this ego blob is to expose it to the cold of a January playoff defeat.  And, yeah, it’s a little bit of a fat joke too.

In his third season with St. Louis, Spagnuolo has led a franchise that shifted faces each year. Following a well-regarded two years as the defensive coordinator with the Giants, Spagnuolo led the Rams to a beastly 1-15 season in 2009. Regaining his composure, Spagnuolo followed it up with a respectful 7-9 playoff near miss in 2010 before turning in what appears to be another monstrous season this year.

Every time Marvin Lewis’ run as the head coach of the Bengals seems dead, he seems to come back again. This season looked to be his final chapter in Cincinnati but the Bengals have come back as strong as ever, knocking off a few of the weaker teams in the first half of the season.

Poor Caldwell, all he wants to do is survive as an NFL head coach without any discernible skills or personality of his own. Attaching himself to Peyton Manning’s throwing arm has kept him as an NFL coach for this long, but now that his host has died (at least for this season) we get to watch Caldwell slowly shrivel up and disappear from the NFL, unless he can attach himself to another host like Andrew Luck this offseason.

Just when things seem to be a dream, like the Redskins winning start, Shanahan manages to turn it into a nightmare. The same goes for fantasy owners who have had their hearts ripped out by his evil RB games for the better part of the last two decades. The fact that he is paired with the evil troll Daniel Snyder only makes it worse.

Norv Turner, Chargers
The Wicked Witch of the West

Ah Norv, who each season who a fright into the rest of NFL with his San Diego teams. As everyone else travels the road to the playoffs they know that the Chargers are lurking somewhere out west. Thankfully Norv’s teams tend to melt in the playoffs just like the Witch in a wet T-shirt contest.

The success of this year’s 49ers was unexpected, and only noticed thanks to a brief outbreak of violence in Detroit. While most people in the country hasn’t been able to catch more the a glimpse of the behemoth that came out of the Bay area, they know they are there and ready to wreak havoc in the playoffs.

For the rest of the coaches in the NFL, Cowher lurks beneath the waves, ready to take a bite out of their career at a moment. As the losses mount in places like Miami and Dallas you can almost hear the iconic music from Jaws getting louder and faster, signaling someones imminent demise.