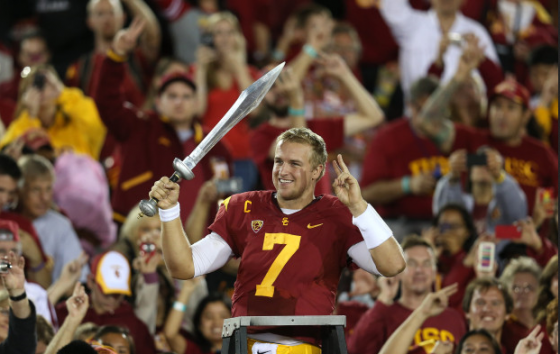 Christmas may be a little testy in the Kiffin household this year. After a year of disappointments for the University of Southern California football team, that culminated in losses to rivals UCLA and Notre Dame, USC’s Associate Head Coach, who was primarily responsible for the defensive schemes. Monte Kiffin has resigned. However, in keeping with the Greek tragedy aspect of the Trojan name, Monte Kiffin is actually the father of USC Head Coach Lane Kiffin. 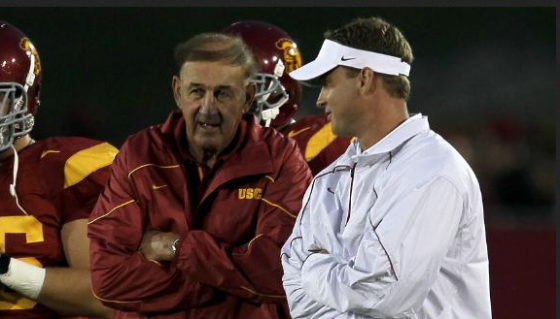 Officially, Monte Kiffin resigned from his post sparing his own son the embarrassment of having to fire him. Don’t get us wrong. Lane Kiffin fully accepted daddy’s decision. They did it all very professionally. This means that Lane put the sword in the ground, stabilized it, and said, “Okay, Dad. Fall hard one time and make sure that it goes straight through. We only have one chance to get it right.”

Officially, Monte released a statement that curiously omitted the phrase “I raised you … you sad little SOB… and this is the thanks I get.”

“I wanted to make this announcement now so that our players who are preparing for the bowl game and our recruits who will be visiting campus are aware. The chance to work for my son, Lane, was unique and memorable, but we always treated each other professionally on a coach-to-coach basis. Although things didn’t always go as well as we would have liked this year from a defensive and win-loss standpoint … I see great things ahead for the USC football program.”

Somehow, we missed the part about Mom sending her love. Lane, as is customary when you are firing or refusing to bail out family members, released his own statement on the matter.

“I respect my father’s decision and his desire to return to the NFL,” Lane Kiffin said. ”We are very appreciative of the hard work and effort that he put in at USC these past three years. He has a tremendous passion for coaching young men, and he is a phenomenal recruiter. The timing of this allows us to move forward now in the hiring of a new coach.”

Lane’s return statement took a tone of,”There’s the door, Dad. Here’s your ass. The two may meet. The two may not. I am just going to let you work that one out with fate. By the way,  Mom’s assertion that giving birth to me was ‘a black mark in history’ on the voicemail was kind of hurtful.”

Of course, Monte will probably find work in the NFL. There is also the tantalizing idea that he could go back to the one place where he was a defensive coordinator and always more popular than his employment challenged son.