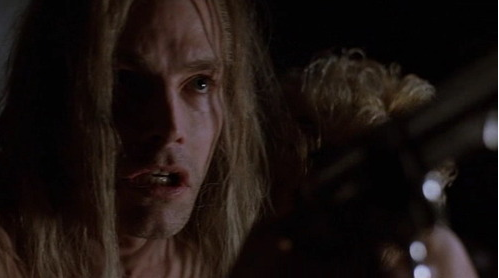 Do you know who Michael Massee is?

OK. I’m getting a nod or two and more than a few bewildered looks.

Let’s try again. Do you remember Fun Boy from The Crow?

Oh yeah, a few more light bulbs went off and a couple of knowing smiles are now coming my way.

Stay with me here. Do you know about the man who shot Brandon Lee?

Paydirt.  You think you were sad about the turn of events that ended one of the most promising stars of the 1990s? Imagine if you were the guy that pulled the trigger. You might as well have been in the car that hit James Dean. As hard as the world was on Michael Massee, Massee was much harder on himself after that event. He was ruled to be completely innocent in the case of the shooting. However, he went to New York and left acting for a full year because he was so despondent over the shooting. Massee cared that much about your loss as well as his own. After starring in the most famous movie about Devil’s Night ever, he effectively ended his career. In Hollywood, a year sabbatical equals out of sight and out of mind. Coming back means literally starting over.

When he did return, Massee endured a life of cable television guest shots and X-Files villainy. However, the show 24 started to put Massee back on his feet. Eventually, he even scored a starring role in the CW series Supernatural in 2007. It was during the press junket for Supernatural that Massee talked for the first time publicly about Lee’s death, 14 years after the actual event. He was still haunted and emotional about something that was not even his fault. Massee wasn’t even supposed to fire the gun; he was a last-minute replacement for the stuntman who was supposed to fire the gun that day. For this, Massee spent over a decade drowned in guilt.

Spiritually, Massee says that he is in a better place. He and his wife own a clothing boutique in Los Angeles. He did voice work as Bruce Banner in Untimate Avengers II.  You almost have to wonder how in tune Massee was with a character wrestling with an inner largely unseen demon. He also played a serial killer in Criminal Minds. There are days when he probably wonders how his life might have been different.  On this Devil’s Night, take a moment to remember a living man irrevocably scarred by the memory of a movie made about it.