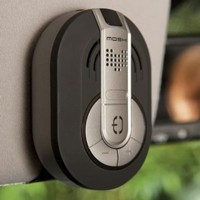 However I say it, it means two things; I don’t have to risk my life and the lives of others trying to make a cell phone call while I drive and I don’t have to search for my bluetooth headset, which is consistently in a different place in my car and also usually dead. Not to mention looking and feeling like an ass wearing it.

The Moshi car kit is fantastic. It clips to your visor in the car so you never have to look for it, the speakerphone works great, better than the one on your phone ever could, and to use it, all you need to do is talk. Saying “Hello Moshi” turns it on and (after initially pairing it) automatically hooks it up with your phone and you’re ready to start voice-dialing. It doesn’t get much easier than this. When asked, Moshi gives you battery and connection status, lets you take or ignore incoming calls, lets you also do most of your phone’s voice commands and turns itself off when not being used.  All of this for just under $80. Say hello to Moshi.

Available at Amazon, Brookstone and at www.MoshiLifestyle.com.