Sports > Other > Most Hated Sports Personalities

About a month ago, Forbes released their list of most disliked people in sports. And you know what? They got it wrong. Manny Ramirez? Really? I didn’t think anyone cared enough about Manny to hate him that much. Allen Iverson? Where did that come from? And having John McEnroe on the list is a joke. However relevant McEnroe even is today, he seems actually well liked. This isn’t 1981.

So here’s a better look at Who’s Who of the Sports Most Hated personalities today (Sorry Barry Bonds. You used to be hated. Now you’re just forgotten): 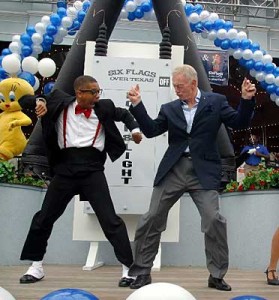 Why you should hate him:Like anyone needs a reason to hate the Cowboys, the so-called America’s Team. I didn’t vote for them. But the Cowboys and Jones do help fill a void. That of the hated owner. With George Steinbrenner fading from the limelight (and Al Davis simply too crazy), there needs to be representation on this Top Ten. So in steps Jones and his massive ego. At least when he’s not getting all the plastic surgery money can buy.

And if hating on the Cowboys wasn’t enough, you can also blame Jones as the central figure behind why no one could actually watch the NFL Network for several seasons. Way to go Jerry! But let’s not forget that Jones has still got game. That billion dollar stadium he just built managed to place an enormous scoreboard square in the middle of punted balls. And the NFL won’t do anything about it, because they’re bending over trying to appease Jones in anticipation of the upcoming labor talks. Can’t upset Jerry and have him cry in a corner. Though maybe the Cowboys need a lesson in stadium building. Their pratice facility recently collapsed and the new stadium can’t contain punts. At least haters can take heart in the fact that Jones is fast at work tearing down all the rebuilding Bill Parcells did a few years back. 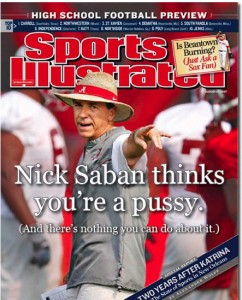 Why you should hate him: As TMQ’s immutable law of weasel coaches holds: When you hire a coach who’s only in it for himself, you get a coach who’s only in it for himself. Ask the Miami Dolphins. Saban left the Dolphins high and dry so that he could take more money at Alabama. That and probably his massive ego couldn’t take not beating up on NFL opponents like he can with an easy college schedule. Let’s not also forget he did all this once before after departing LSU prior to Miami. Tigers fans hate him too, and he won a National Title there. Basically, all of this just means people generally don’t like Little Nicky. I’m sure he cries himself to sleep on his piles and piles of money. Saban’s so hated, even Hall of Fame coach Don Shula called him a “liar” and a “quitter.” And you don’t generate YouTube clips like this without doing something wrong: 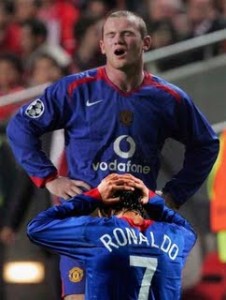 Why you should hate him: This is a rundown of the most hated sport personalities. So despite what the United States might think, soccer is actually a sport. Seriously. And no matter what the sport, nobody likes a whiner. Or a diver. And Ronaldo has made an art of complaining as much as possible while grimacing whenever things don’t quite goes his way. You know, when he isn’t flopping on the ground in his sweet haircut. He’s got so many haters, you can join this Facebook page on it. Plus, just like people whine about LeBron James and Sydney Crosby, nobody likes a guy who’s good and highly paid. But if you need more reasons why the defending FIFA World Player of the Year sucks (besides the picture to the right), know that the beautiful Nereida Gallardo says Cristiano Ronaldo is bad in bed. Take that Cristiano. Oh, and this video provides more evidence: 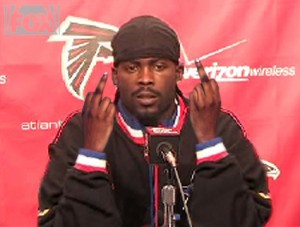 Why you should hate him: Yes, Michael Vick could be higher. Particularly if you’re a card-carrying member of PETA. But there’s the argument he’s not even the most hated NFL quarterback. For that, I could present Brett Favre. It’s a close call. But Vick does have the flavor of the month hatred going for him, as people rage at him again for his treatment of animals. So he’s on the Top Ten and Favre’s bumped. Although I must admit that Vick seems to get far more hatred (and jail time) than Donté Stallworth does. And Stallworth killed a dude this offseason. Does that make sense? St. Louis Ram Leonard Little once did the same thing, and it gets little attention these days. These things aren’t always logical. But it’s weird to think Vick’s best days were when he was the herpes spreading menace know as Ron Mexico. Although he wasn’t a very good quarterback back then either. 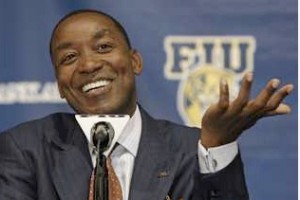 Why you should hate him: Straight Bangin’ has it right. Isiah Thomas sucks at life. Once a great basketball player, Thomas has proceed to burn through the Toronto Raptors, Indiana Pacers, and New York Knicks in a pathway of demolition and destruction. At least when he wasn’t ruining the fifty plus year tradition of the Continental Basketball Association (CBA) or becoming a terrible broadcaster. Oh, and there was that sexual harassment case that he lost sometime in between. He’s like Matt Millen, just with more wreckage and a more disagreeable personality. For instance, he wants to beat up Bill Simmons. For some fun with Zeke, you can play the Six Degrees of Isiah Thomas or wonder when Florida International will go down in flames. Thomas is excellent at burning bridges, and that kind of action will bring about a few angry mobs waiting to beat you down. 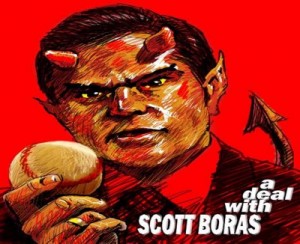 Why you should hate him: No one likes this guy. I’m not even sure his own mother does. He’s baseball’s version of Drew Rosenhaus, but worse than good ole Drew. And he hails straight from the Gordon Gecko School of Greed. He’s the reason Barry Zito makes all that cash for doing nothing (That and Brian Sabean is on crack). Once thing’s for sure, he’s great at getting his clients top dollar. But that also means he’s great at being hated by just about everyone. At least with most people on this list, one can find individuals who like them. But have you ever come across a Scott Boras fan club? I found this blog that goes the opposite way. 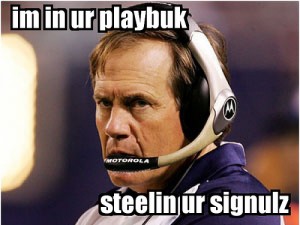 Why you should hate him:Here’s a guy who managed to combine the hatred of Super Bowl success with two other great moments. First, the man in the Hoodie drew a $500,000 fine for openly cheating. And second, he showed poor sportsmanship by walking off the field with 2 seconds left in the Super Bowl. So everyone thinks he a sore loser, lacks class, and is a cheater. What a trifecta. If only he was a star wide receiver, maybe we’d get a great Joe Buck rant about him. Plus, I believe he gets some residual hatred for much much his coaching disciples sucked in Cleveland and Notre Dame. His fingers are in too many pies. 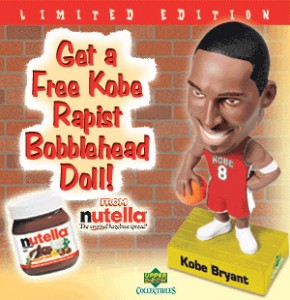 Why you should hate him:If only he didn’t rape so much. Bryant is blamed for breaking up the early 2000s Lakers (an amazing feat since he wasn’t even on the team when it happen – he was a free agent), for being a ball hog, and for being an all-around asshole. Let’s not forget that he nearly cried his way off the Lakers a few years back when he decided they didn’t have enough talent for him. This was despite the fact he voluntarily chose to resign with the team.

He’s been described as friendless, someone who constantly turns on people in his life, and overall generally disliked. Well except in China, where he was adored at the 2008 Beijing Olympics. But then again, China’s food and toys seem littered with poison, so I wouldn’t put too much stock in what they think. They could be as mad as a hatter. Here’s a video dedicated to the Anti-Kobe movement. 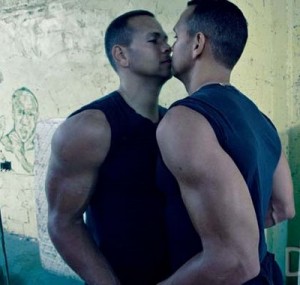 Why you should hate him: Reasons A-Rod sucks. Yankee? Check. Steroids? Check. Fake Personality? Check. Madonna? Check. People hate him for all the money he makes, because “to whom much is given, much is expected.” And while Rodriguez has made a name for himself during the regular season, he has yet to really make a name for himself in the postseason. His Yankee playoff trips have been mostly forgettable, and as a result New Yorkers dislike him. Not that New Yorkers are to be trusted mind you, but it says something when the hometown fans boo you. Everyone else hates him because of the Yankee thing and because they think he acts completely false when the cameras are on. 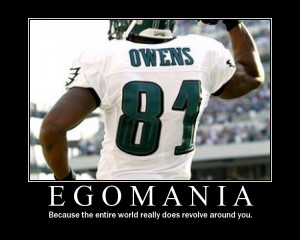 Why you should hate him:With apologies to those that have not yet been mentioned (I’m mainly look at the broadcasters like Stephen A. Smith, Tim McCarver, Joe Morgan, Hawk Harrelson, and Chris Berman), T.O. is our number one. Why? He managed to alienate drama queen lover Jerry Jones. That says something. He also managed to push his way off of a Super Bowl runner-up Eagles team. Sounds like he’s doing something wrong. Besides dropping the ball too many times. Owens is a good player, but he’s not so awesomely good that he can get away with things like a Kobe Bryant can. He’s never been the MVP, never been a World Champ, and yet somehow is always the center of attention. Just check out his reality show.

Frozen and Fearless: A Tribute to Extreme Skiing