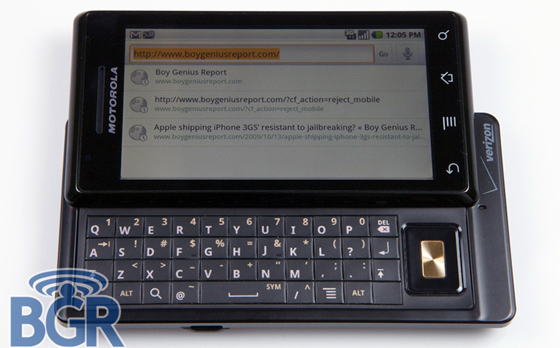 So Motorola apparently have a new Android phone, which surprise-surprise, they are touting as an iPhone killer. Over at the Boy Genius Report they have had the opportunity to play with it and the overall impression appears to be somewhat positive –

“[The] most impressive phone we’ve used since the iPhone”

That actually rather took us aback, because to be honest, it isn’t much of a looker. The track button looks like its been glued on to the end, the keyboard looks flat and kind of fiddly, and the pale blue ‘Verizon’ logo for some reason makes us think of the earliest mobile phones – maybe it’s just how uninspiringly bland it all looks.

That said, we haven’t had a chance to use it, and BGR have. Apparently the keyboard isn’t actually that bad, and won’t necessarily be the final version anyway, and it seems that this thing is fast. Supposedly Google were involved quite heavily in its development, which now that its mentioned doesn’t seem all that surprising… 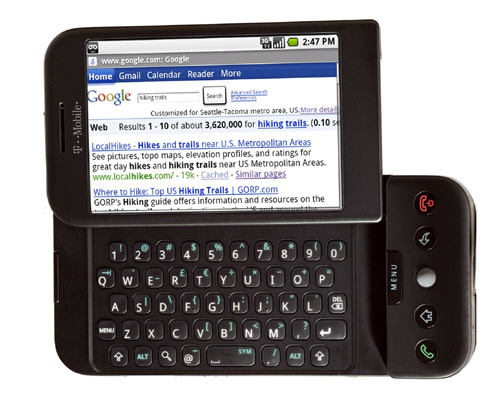 Ok, so they aren’t exactly identical, but they aren’t a million miles away. One can’t help but feel a little innovation would have been nice. If everything BGR say is true, then surely this is just the next in a long line of re-imaginings of the ‘Google phone’?

We’ll withhold judgement on the phone until we get a chance to use it (hint hint Motorola…) but an iPhone killer? We doubt it. And you really only set yourself up for failure when your adverts do nothing other than yell “WE WANT TO BE LIKE THE iPHONE!!!”