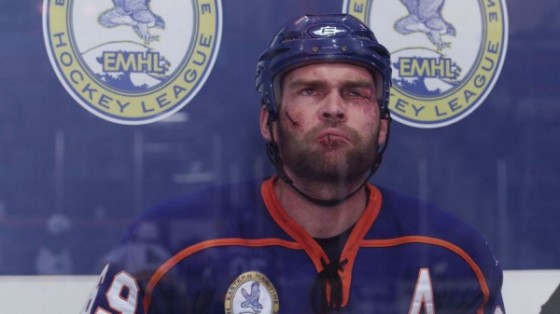 Hockey movies generally fall into two categories. The inspirational underdog overcoming adversity stories like Miracle and The Mighty Ducks, and the raunchy no holds barred comedies like Slap Shot. Goon manages to fall somewhere in between as it tells the tale of Doug Glatt, a simple-minded loner who achieves a small amount of fame as an enforcer for a minor league Canadian hockey team.

Glatt, portrayed with dimwitted fervor by Seann William Scott, lives a dull existence working as a bouncer at a small town dive bar. Lacking a wealth of intelligence, Doug has been blessed with two imposing physical attributes: a thick skull and fists of granite. A vicious beat down of an angry player who charges the stands at a local game earns him a job as a “goon” for his hometown team. Despite not being able to skate, Doug lets his fighting prowess do his talking and ends up being promoted to a spot on the Halifax Highlanders.

Now fittingly nicknamed “The Thug,” Glatt quickly gains a reputation as being the league’s toughest enforcer, laying claim to the title held by aging brute Ross “The Boss” Rhea, played by Liev Schreiber. A distant rivalry develops between the two men which inevitably leads to a bloody third-act showdown to determine which hired gun is the best of the best.

There’s not much in the way of plot development or narrative progression, but as a series of individual scenes, Goon pieces together nicely in a tightly compacted pugilism-fueled package. It’s a mishmash of countless other sports movies and even bears a strong resemblance to 1986’s Youngblood, which also culminates in opposing principals trading blows on ice. However, a memorable dialog exchange set in a diner between Scott and Schreiber is so well-written and deftly performed it feels out-of-place amid all the brutal violence and ribald antics.

Seann William Scott portrays Glatt as a naive, humble man-child desperate to find his true calling. He pulls off the thug character but infuses him with a sweet disposition and unyielding loyalty. For a guy who punches people in the face for a living, he isn’t some rage-filled Neanderthal, which is certainly the point co-writers Jay Baruchel and Evan Goldberg are trying to convey. At the same time, there’s no hidden agenda to tame Glatt or improve his station. He’s a thug, nothing more, nothing less.

The few scenes of actual hockey are choreographed with care, paying special attention to the frenetic pace at which the game is played. The punishing bouts speak to a bygone era, but there is a science to being a successful goon that goes beyond toughness, and the filmmakers understand this implicitly. Alison Pill steals a couple of scenes as Doug’s conflicted love interest and Baruchel provides a sizable dose of comic relief as a hyper superfan.

Does Goon come close to capturing the genius of Slap Shot? No, but expecting it to would be irrational and unfair. With theaters being overrun by teenagers fighting one another in elaborate tournaments, shiny vampires playing house and poorly marketed sci-fi adventures. it’s refreshing to see a cut and dry film that isn’t pretending to be something it isn’t.

Goon opens in limited release today and is also available On Demand.