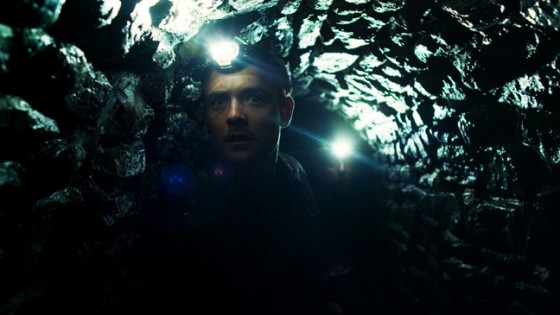 I normally avoid writing movie reviews these days because it’s seemingly impossible to pen one without including at least a couple of minor spoilers. Especially for films that rely on the gradual unfolding of a serpentine plot. I myself don’t read reviews anymore for this very reason. No matter how respected the critic, he or she will inevitably hint at or downright expose a crucial element of the story that will cloud my judgment before I set foot in the theater. With this in mind, I shall endeavor to examine writer/director Ben Wheatley’s Kill List without destroying the mystery.

Jay, a former British soldier, has transitioned to a pastoral life in the country with his wife Shel and seven-year-old son Sam. This foray into domestic bliss is anything but due to Jay being out of work for eight months and the seething tension between he and Shel. Things come to a head after a visit from Jay’s friend and partner Gal, and Gal’s strange girlfriend Fiona. The result is an awkward dinner party that culminates in a vicious screaming match between Jay and Shel.

Gal offers Jay a solution to his troubles: come back to work. But Jay and Gal don’t have normal nine-to-five jobs. They’re professional hitmen. Jay’s reluctance to resume his murderous ways stems from his last assignment, which isn’t fully explained, but apparently ended badly. Gal finally convinces Jay to accept a new mission, and the duo sets off to complete a three-name hit list that includes a priest, a librarian and a member of Parliament.

It doesn’t take long to see why Jay has been out of the game so long: He’s a raging psychopath who enjoys torturing and killing a little too much. As he and Gal cross names from the list, they find themselves descending into a dark, morbid world steeped in ominousness. What ensues is a mixture of intriguing twists and WTF moments that will either keep you enthralled or cause you to roll your eyes. I did more of the latter, but only because I found the third-act reveal predictable and a tad silly.

Precise pacing, magnificent cinematography and an effectively eerie soundtrack lift the film above heights of others in the genre with an equally small budget. Ben Wheatley knows how and where to place his camera, and he extracts memorable performances from his cast, in particular Michael Smiley (Gal), whose calmness and humor offers a welcome reprieve from the violent and unsettling subject matter.

There are a couple of well-known movies Kill List resembles that it will be unfairly compared to. It treads different territory and does so in a skilled manner. The journey includes several signs, symbols and clues that foreshadow the climax, although it will likely take a second viewing to catch them all. But ultimately it fails on a dramatic level. The payoff seems a little rushed, as if they couldn’t wait to pull back the curtain. It also struck me as overly clever. I get what Wheatley was going for on a literal and metaphorical level, but I just didn’t buy what he was selling.