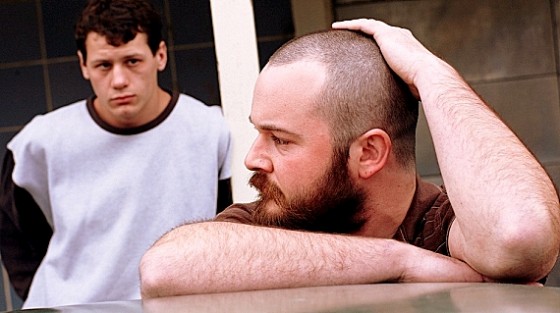 Eerie. I’ve used the word countless times when describing certain movies, but I don’t think I’ve adequately explained what it means, for me anyway, when a film is eerie. It has very little to do with being scared by people, places or things that go bump in the night. It has more to do with the atmosphere created by the director, cinematographer and production designer.

One of the hardest tasks faced by horror/thriller filmmakers is eliciting the audience to feel unsettled strictly by the images they are seeing on-screen, without the benefit of artifice and shock value. The Snowtown Murders shows multiple scenes of graphic, terrifying violence, but that’s not what makes it an eerie movie. It’s the anticipation of the acts depicted and the brutal killings not seen that raises it above the standard serial murderer biopic.

The film’s dark and tragic path is filtered through the eyes of a sexually abused teenager named Jamie, who finds himself under the wing of John Bunting, a suitor of his beleaguered mother and one of Australia’s most notorious killers. Bunting quickly assumes the role of father figure to Jamie and his two younger brothers, using his deceptive (and extremely creepy) charm to manipulate the children’s fractured emotions in his favor.

On the surface, Bunting seems to have good intentions toward the brothers and provides a protective force sorely lacking. However, his intense hatred of pedophiles, homosexuals and other social outcasts goes way beyond the regular political rants he spews at community gatherings. Identifying him as a wounded animal eager to strike back, Bunting lures the impressionable Jamie into his inner circle of madness, and begins the sickening process of morphing him into a sadistic psychopath.

What ensues is a methodical journey inside a depraved existence saturated with skewed ideals and misguided rage. First-time director Justin Kurzel drains the palette of color, choosing instead to paint his cold, foreboding portrait in overcast tones. Cramped, confined spaces convey a suffocating isolation, not only in the physical environment, but also inside the characters’ minds. No one is safe and escaping the dismal surroundings is impossible.

Daniel Henshall’s portrayal of Bunting is more than convincing. His matter of fact seduction technique is what makes him so frightening. He knows exactly which buttons to push to get the desired results. Watching him use his Svengali-like powers to corrupt Jamie is as equally disturbing as ghastly scenes of bloody torture. Being unfamiliar with Henshall’s previous acting work definitely helped heighten his monstrous persona. Eye for an eye justice never looked so despicable.

The Snowtown Murders won’t be to most people’s liking. I can envision droves of moviegoers walking out of theaters rather than enduring the atrocities. That being said, sticking it out to the bitter end is worth it if for no other reason than to admire some exceptional acting and direction. Kurzel has a unique way of unfolding a story and looks to have a promising future.

For my money, Snowtown is the definition of an eerie movie. I never turned away or startled, but the same uneasy feeling that gripped me while watching hung around for a couple of days after. This subject matter has been broached before on the big screen, and executed better, but I still found myself intrigued every step of the way. Minor flaws aside, it’s a solid debut effort.