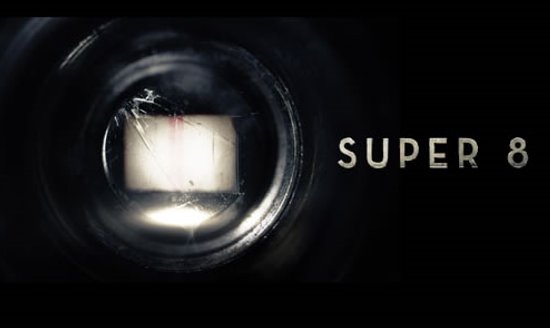 There’s a cliché  that says, “They don’t make ‘em like they used to.” This is usually said by people of an older generation whose cinematic taste lives in the days of the Hayes code, where things like sex, graphic violence, and the like were not allowed. These are the same people who would probably gasp at the frankness (re: honesty) of something like Superbad and wouldn’t go within ten feet of a film like Brokeback Mountain.

However, this same sentiment can be applied to those of us who were alive and kicking during the VHS boom of the 1980s. This was an epic time for three genres of films – action, horror and “kids movies.”

And “kids movies” doesn’t mean anything from Disney or some kind of G-rated Care Bears crap. It means films that opened the minds of young kids. Movies that allowed us to go on an amazing adventure with our friends. A time of Goonies, Gremlins, The Last Starfighter (shut it, haters, it’s awesome), Ghostbusters, etc. Films enjoyed equally by children and adults.  And those of us with slightly liberal parents would throw Stand By Me into this same list.

A time when Steven Spielberg was king.

These days Spielberg is busy directing awful, awful films like Indiana Jones and the Kingdom of the Crystal Skull and The Terminal. In fact, Spielberg started sucking in 1997 with the ludicrously bad The Lost World and the insanely boring Amistad. Since 2000, he has only directed three watchable films: Munich, Catch Me If You Can and Minority Report. And  now all of the good kids movies have been taken over by Pixar. No offense, Pixar, but your precious Toy Story franchise is nothing compared to The Goonies. Nothing made presently (or for the last ten years) is capable of capturing imaginations like back in the day. Until now…

Super 8, the latest directorial effort from J.J. Abrams (Lost, Star Trek) and producer Steven Spielberg, is a nostalgic blast from the past that the children of the late ’70s and early ’80s have been craving for a long time. 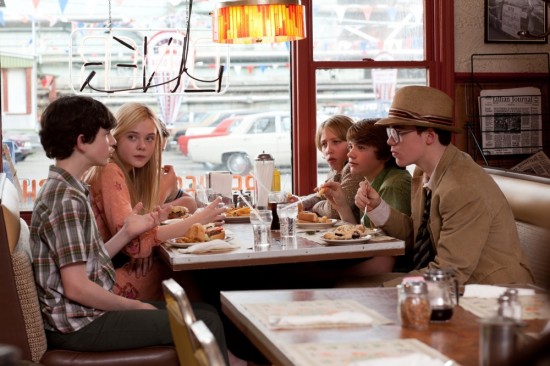 The plot is fairly simple. It’s 1979. We follow Joe (played by newcomer Joel Courtney), a 13-year-old boy whose life is changed forever when his mom is killed in an accident at her job. Since her death, Joel seems to find solace with his friends as they work together to make their own zombie film. His home life isn’t so grand as his father Jackson (Kyle Chandler – Friday Night Lights), a local sheriff’s deputy, remains in mourning and disapproving of his son’s antics with his friends.

One night while shooting footage, Joe and his friends, including Alice (Elle Fanning), the daughter of the town drunk (Ron Eldard) whom Jackson blames for his wife’s death, witness a truck crash head on into a military train, resulting in one of the film’s most explosive action sequences. Before leaving, they discover the driver of the truck is alive and their science teacher. He pulls a gun on them and tells them to leave and keep quiet because they and their families will be hunted down and killed.

The next day, the gang tries to act normal, but the sudden military presence in town leads to questions. As they continuing filming, Joe and his friends discover a secret inside the train that the military is trying to cover up. Bizarre occurrences in town lead them to start investigating what was on the train, what it’s doing here, and what it wants.

Super 8 is a fantastic slice of nostalgic filmmaking. There is a bit of the Spielberg magic going on, but this is clearly a J.J. Abrams film. Warning: if the lens flare in Star Trek annoyed you, it’s present here and it’s persistent. That aside, this film is absolutely fantastic. It simultaneously captures the magic of late ’70s and ’80s films, but feels very contemporary. This is J.J. Abrams’ masterpiece. 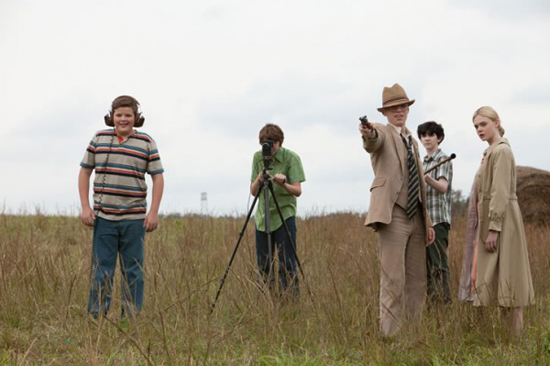 There are minor details to nitpick, like a few moments of implausibility involving the backstory of the train’s cargo and a few scenes that could have been fleshed out a bit better. But, none of that really matters.

This isn’t some film trying to win Best Picture at the Oscars. This is a film that embraces a style of filmmaking that has been poorly imitated for the last two decades. It has an intriguing story and damn good performances — even from the kids! That’s a key component of why this film works. The kids sound like kids, not kids trying to be adults. Everything about this film either totally works or is just slightly imperfect.

This is hands down the best film of the summer so far. Sorry, X-Men. You’re now number two.

Come on, Hollywood machine. You crank out imitations of whatever is trendy at the time. It’s time to make more films like this. The audiences will thank you.