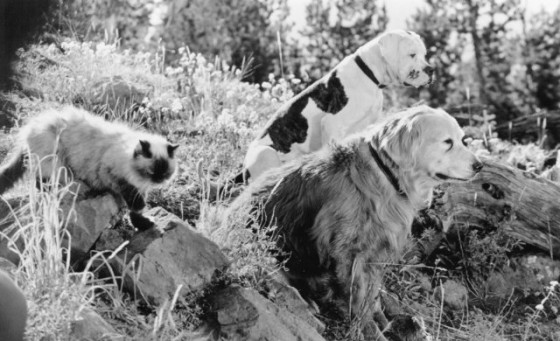 Today is National Dog Day, which got us thinking, who doesn’t love a talking dog? Entire movies have been based on them, and we’re not ashamed to say we can’t get enough of them. For this particular list, we’re going to focus on movies where dogs can talk but aren’t specifically animated or taken directly from an animated show. Get it? Let’s just say it leaves out ‘Scooby Doo’ and ‘Underdog’ (which is fine by me considering the ridiculousness of those films any way).

So what’s left in? A lot. Believe me. But some are remakes, so I’ve stuck with the originals when applicable. Talking dogs are great, so let’s check out many movies where those wacky canines just won’t shut up.

The premise here is pretty silly, but basically a scientist discovers a serum that cures dog allergies in humans and cats want nothing more to get their (ahem) paws on it. So begins the battle of the two mammalian house pets. This travesty was followed by Cats & Dogs: The Revenge of Kitty Galore. Seriously.

As the third in the long and obnoxious line of Travolta/Alley talking infant flicks, this one actually features talking dogs, voiced by Danny DeVito and Diane Keaton. And it’s just as mind-numbingly asinine as it sounds. Just in case you were wondering.

So Disney thinks it can get away with just about anything featuring cutesy dogs with stupid voices and call it a day. CHACHING! Money. In this case, it takes a lot more than George Lopez voicing the titular Papi to make this worth spending time on. My kids liked it, but my kids like bizarre flavors in films. Oh, and there are two more of these piles, too.

Speaking of Disney and their penchant for animals (specifically dogs and cats) in starring speaking roles, at least they used to make flicks that weren’t vapid and annoying and pandering to the lowest brain cell. This move is an absolute classic and follows the adventurous exploits of two dogs and a cat. Even the remake, Homeward Bound- The Incredible Journey was pretty slick and featured Michael J. Fox and Sally Field.

This one’s a bit of a black sheep (ha ha!) in the category because it actually features a pig who was raised on a farm with sheepdogs and thus thinks he’s one. Sort of. Basically, it’s about Babe and his journey to really find himself… you know, as pigs are wont to do. Also there are plenty regular talking dogs, too. Just in case you were worried. Oh, and lest you wonder of there was a sequel, well, there was: Babe, Pig in the City.

Wanna cry like a little girl? Especially if you’re an old man? Well then just feast your glimmering, glazed eyes on this gem. Sure it’s another dog and cat flick, but when their separation anxiety sets in, grab the tissue because it only gets more heartwarming. There’s an awful lot of dust in this room…

We owe it all to Air Bud and those animal antics if you or your kids happen to be fans of the ‘Buddies‘ Series that follow. Trust me. If you have kids you know these movies ranging from every conceivable topic like ‘Santa Buddies‘ all the way to ‘Treasure Buddies‘. There are a lot of them and believe me, they’ll shut your kids up for a good few hours.

I like Tim Allen as much as the next guy, but you just can’t go wrong with the Disney original Shaggy Dog featuring Tommy Kirk as the kid who, via magic spell, becomes a dog when it’s really not a good time to be one. Think Teen Wolf with less angst (and less Michael J. Fox). This ditty spawned both a sequel (The Shaggy D.A.) and the aforementioned remake with Tim Allen.

Chevy Chase and Benji? Oh. So much yes.

Ever wanted to come back after death as a dog? Well, in this tale, Thomas Johnson does just that! And the dog (and the once man) is voiced by Matthew Modine. Also there’s Samuel L. Jackson, so there’s a good bit of sass. I don’t know why I just said that.