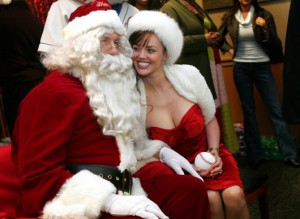 Mr. Anna Benson, better known to some as just Kris Benson, has been named the Texas Rangers fifth starter to begin the 2009 season. Although it’s more of a reflection on the piss-poor state of Texas pitching (they haven’t had a good rotation since 1996), it’s good to see Benson, a former first overall draft choice, back in the majors after a two year absence (last seen in 2006 with the Baltimore Orioles). It’s even better to see Anna Benson still around the game, as she’s very adept at the double-switch, as well as the hidden ball trick. So we’ll use this small bit of news as an excuse to run some Anna Benson photos: