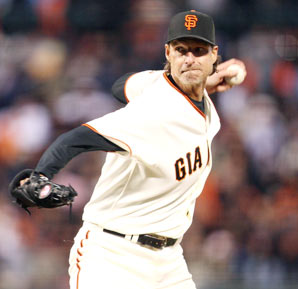 Last Thursday, Randy Johnson became the 24th pitcher in baseball history to get at least 300 wins. While, relatively speaking, this is a remarkable feat, the way in which the pitcher’s W is calculated in baseball is misleading. Baseball purists will argue till their death that it makes sense, but to me a pitcher’s W in baseball is a deceptive statistic that should only be taken with a grain of salt.

First, the definition. A ‘win’ is a statistic in Major League Baseball credited to the pitcher for the winning team who was in the game when his team last took the lead.

There are two exceptions. The more common exception is that a starting pitcher must complete five innings to earn a win (four innings for a game that lasts only five innings on defense). I’m assuming the rule makers picked five innings because that makes it the majority of the game (they could have also picked six or seven, thus making it even more difficult to earn a win, but settled on five). If the starting pitcher fails to meet the innings requirement, the official scorer awards the win to the relief pitcher who, in the official scorer’s judgment, was the most effective.

One problem with this rule is that a starting pitcher can earn a ‘loss’ in no set number of innings, even though he might not pitch the majority of the game, and even though his relievers can give up runs as well. It makes sense that the pitcher gets the loss, but if he does while pitching less than five innings, than logically he should be able to get a win for pitching less than five innings. That aside, there’s an even bigger reason why the ‘five innings for a starter’ rule does not make sense, and that is because an ‘effective’ relief pitcher can earn a victory without pitching five innings. Simply speaking, that’s inconsistent. Why should a starter be unable to earn a victory without pitching five innings when a reliever can come in, pitch one inning, and get the W? Not fair.

I’ve also got to point out that a pitcher has almost no control over whether he gets a win, since he must rely on the team’s offense to score. Unlike other sports, baseball, relatively speaking, isn’t played in a way that defense can transition to offensive chances. For instance, great defenders in hockey, soccer, football and basketball can create scoring chances themselves. And let’s not forget that a pitcher must rely on his fielders to do their jobs (though if they don’t then they’re assessed errors and the hits and ‘earned’ runs don’t count to the pitcher, but a loss does).

The last thing that is misleading about a pitcher’s ‘win’ statistic is the fact that pitchers often rely on relief pitchers (who get ‘holds’ and ‘saves’) to complete the games for them, therefore putting the starter’s W in another person’s hand completely. Many years ago, it was more common for pitchers to pitch complete games, so when they earned a victory, it meant a hell of a lot more than a pitcher who is there for only 5/9th of a game (and especially a lot more than a reliever who gets the win while only playing one inning). That would be like hockey goalies playing only the first two periods of each game and getting a decision (which technically can happen but rarely does it result in a win). Therefore, complete game victories are the most accurate and unmolested W there can possibly be in this column (and even that relies on an offense to produce, which again is completely out of the pitcher’s hands. Pedro Martinez once retired 27 straight batters but didn’t get the victory because the Expos didn’t score).

So, my point is, MLB should remove the two exceptions to the rule as noted above, and also de-emphasize the stat entirely, and instead focus on ERA and highlight complete game victories.

My next article will be about why the Home Run statistic should be divided up between ‘clean’ and ‘roid-aided.’ Anyway, let’s watch Family Guy.