Humor > Videos > MSN Anchor Gets Her Black People Mixed Up

MSN Anchor Gets Her Black People Mixed Up

Civil rights activists are a lot like rock stars in some respects.  When they first hit the scene, they’re fresh, they’re vital, they’re a new voice, and they hand in their greatest work.  Then the new guys show up while they’re working on their “difficult” album/cause and take the art form in a completely new direction, leaving the ones who didn’t die tragically while on top to either potter around in irrelevance or blindly stumble around acting like nothing’s changed.

Then again, they’re also historically important figures, unlike most rock stars, which kind of raises the question as to why MSNBC anchor Contessa Brewer thought she was talking to Al Sharpton instead of Jesse “Action” Jackson.

Although, since Sharpton ditched his trademark jogging suit a long time ago for an actual suit, and they’ve both long since become parodies of themselves, we can understand the confusion. 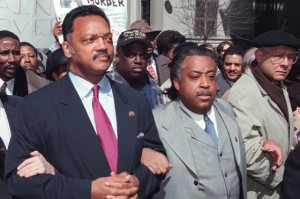