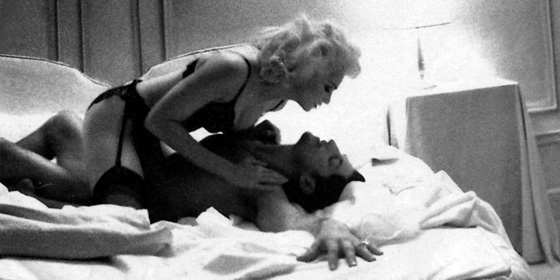 Though mayhaps long forgotten, “Justify My Love” is undoubtedly one of the most bizarre videos a self-respecting human being could ever summon enough courage to watch. As the video itself plays, one begins to feel one’s own mind weakening; treading the fine line between mental stability and a colossal mental breakdown (or a 4-minute long brain-fart if you will).

Through sheer determination and unabated willpower, we’ve taken the time to view and analyze this historic circus act of a video for your entertainment, but do be warned; actually watching it is strangely similar to willfully allowing your mind to be broken by men in lab coats (all that’s missing are clips on your eyelids to ensure the information is infallibly received by your mind and a man with a squirt bottle full of liquid tears to intermingle with your own real ones).

And so it begins…

It begins innocently enough…well, not really. Madonna walks dizzily down a motel corridor towards the camera like she’s just been shot in the back multiple times (which is perhaps not too far from the truth *wink, wink*). Those of us who’ve yet to witness this video quickly presume it to be another typical one of her performances. However, we’re quickly shown otherwise as a quick shot of a mannish (and very French) looking woman standing nearly naked in what appears to be a doorway kaleidoscope gives us some fairly strong second thoughts. 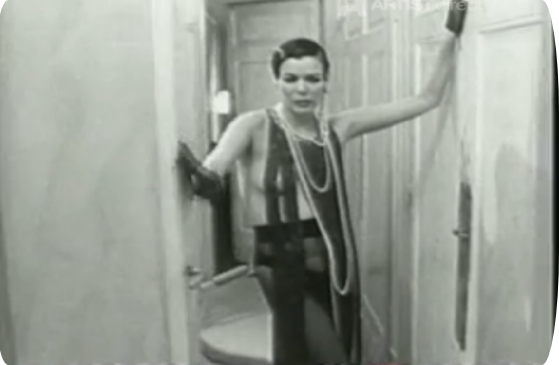 Just as quickly, we’re brought back to Madonna who has decided to fling herself against a wall and give her own face and crotch some TLC as she awaits some random Joe who emerges from a room in the background.

We’re then subjected to some quick shots of a couple getting a little too dirty to still have their door open and some woman who appears to be trying (and failing) to milk herself.

What comes next is both hilarious and grossly disturbing at the same time; a fairly flexible and very androgynous looking person who belongs in either the hall of human oddities or prison (preemptive arrest might be in order for this creep) takes the scene. Little did we know, he would turn out to be a recurrent theme in this horror show.

We watch in tear-stained wonder as Madonna joins an oddly religious fellow in bed. Our flexible friend flashes before us once more just as Madonna and another friend of hers attempt to inhale each other’s saliva whilst the Holy man watches in angst from the side of the bed (he looks like he’s watching his team lose in the Super Bowl or perhaps witnessing the birth of a giraffe).

Flexy-Man appears for another second or two before we’re briefly introduced to Michael Jackson’s creepier twin and his She-Man geisha lover. 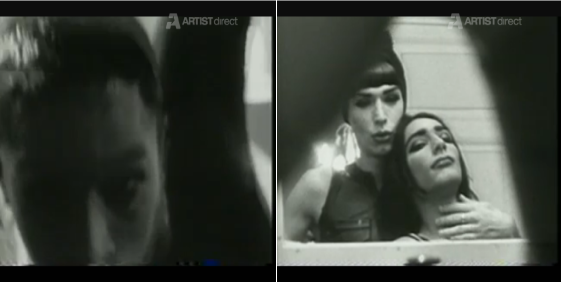 After yet another Gumby-Guy appearance, we meet a female law enforcer who’s clearly not taking her job very seriously. She claws at the tangle of hairs and chains that now adorn Holy Man’s chest just before Sir Bend-a-lot shows us a few more of his moves.

We are quickly returned to images of Madonna, who is now hardly clothed and doing her best impression of a wounded poodle in bed. Seconds go by and we get to observe as Holy man wipes his face up and down her body as though she’s some sort of human towel.

At this point transgendered folks are flashing on and off the screen in rapid succession. In the blink of an eye, Mr. Fantastic reappears and does one last ridiculous pose behind a pair of seriously disturbed individuals whose garments collectively possess about as much rhyme and reason as the rest of this nutty video.

Finally, we reach the end of our observer’s journey through Hell as Holy man calls listlessly after Madonna who rushes out of the room and down the hall laughing.

As the screen slowly fades to black, we’re presented with a short reflection regarding pleasure.

It’s supposed to be thought-provoking, but alas, after witnessing whatever it was they filmed and presented to us, we can only conclude that a man is truly poor if his pleasures bear even the slightest resemblance to those of Madonna and her horrifying buddies.

Fun Fact: One of the main writers for this song just happens to be Lenny Kravitz (he also wrote the remix).