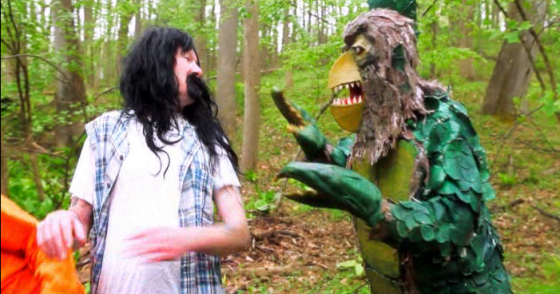 Back in April, I once again attended one of the finest underground horror conventions on Earth called Cinema Wasteland. But when I wrote that article I left out what was ultimately the most fun we had there, hands down. Oh yeah, outside of meeting Tom Savini and the panel from Day of the Dead.

You see, my buddy suggested we see a movie called Mutantis from Dire Wit Films. Well, based on the name alone I was definitely game. The movie itself was an absolutely, unabashedly goofy mess, and I loved every second of it. In fact, truth be told, it was the best thing in terms of cinema I watched all weekend. There was a killer mutant insect bigfoot thing, a flurry of crazily dubbed and overtly insane acting, and a plot where the creature’s giant penis plays a fairly major role. So yeah, friggin phenomenal.

And so, I was obviously excited to interview one of the folks responsible for making the movie. But why just get the words of the director? No, anyone could do that. What really hit a note with me (sorry) was the soundtrack! So I asked a few questions to Paul Joyce, the man behind the music.

What drew you to the production of Mutantis?

“I have been producing music for Dire Wit Films since 2006. I have known since we started production (a few years back) that I would be supplying the music. I did have another composer (Wayne Crowther) help because of time issues and he did a fantastic job!”

How long have you known the makers of the film?

“Well, Dire Wit has really grown and changed since I got involved and I met the two Marks who started this at different times. Mark Colegrove (producer of Mutantis / director of Isle of the Damned) and I had met when we were playing in bands in the early 2000’s.

Seeing his early film work, I knew it was funny and had direction. Fast forward a couple of years and my group (Dark Water Transit) had just put out an album that was a tribute to Gobin’s music for Dawn of the Dead (my favorite film). Mark and Mark had finished the first Dire Wit Film, Pleasures of the Damned and were gearing up to make Isle of the Damned. I ran into Mark at a horror con while selling the DWT album and it went kind of like this…

“Oh! You like Goblin and Italian horror type stuff AND just made this album of that kind of music….we are making a spoof of Giallo cannibal flicks and need someone to help” (this is paraphrased or never happened but that is the truth of the story). Pretty cool when I look back on it.

I met Mark Leake (writer) at a job I had bar-tending a rock club. He was there to see Exhumed and we somehow started talking and he told me about POTD and I responded that I really wanted to get into making music for flicks. We did not connect again until after the aforementioned story.

Kelly Fitzgerald (director) and I met when I started working on Isle of the Damned. She was assistant director. Kelly and I worked well together. We had some shared stress about deadlines with Mutantis and we are on opposite coasts (Dire Wit is Baltimore based but two of our directors are in the city of angels) so that meant very specific notes and time codes for placement (I laid the music in with Mark Leake) and we pulled it off.

I should mention our other director Jason Koch as well (7th Day, Pig Pen). This is the kicker, Jason and I met around 2005 when I was making the Dark Water Transit/Goblin tribute. I actually commissioned him to design the cover of the album. After Isle of the Damned, Mark Leake wanted to make 7th Day and Jason was getting recognition for his awesome effects work with Kaleigh Brown at Aftermath FX.

He had just directed a short called Lamplight and next thing you know, we meet and are working together. Circle complete? I have been working with them for years now and I am really proud of what we have accomplished.”

What were your inspirations for the music you created for the movie or just in general?

“Each film I have worked on is it’s own beast and I change it up each time. I have also worked with Astron-6 and Troma…it’s always it’s own thing. With Isle of the Damned it was my first film. A lifetime of writing music, watching horror flicks, and desire to work on a movie came gushing out. I had a couple of years and basically cut my teeth being composer,performer and engineer all at once. Colegrove gave me a wealth a freedom. I made every funky, sleazy, proggy, moogy thing that popped into my head.

7th Day I was itching to score the whole thing (except the opening credits which is a little jam I made) and make something bold and disturbing. I wanted to really help create a specific atmosphere. Everything is built off of and cued to the emotion and action of the scenes. I had the wonderful help of John Dierker. He is a reed player from my town and we play together. He is a master and when I started the project I had him come over and make every ‘out’ sound he could. I cut and arranged those sounds to make many odd noises (he also played some written parts as well). Then I would use other stuff I manipulated and would work with it till I made it musical. I then added other stuff (percussion, guitars) till I had a piece that was composed, but sounded strange in it’s own way. There is maybe one or two synth parts in ALL of 7th Day, every sound is made from an organic source. I just twist the hell out of them.

Mutantis was done fast and raw (intentional). The writer (Leake) had some very specific moods in mind for the film. Many of the scenes were influenced by old grind-house stuff and he desired for the music to reflect that. We wanted the bulk of it to sound like a very low budget soundtrack made by a bunch of tripped out hippies in a garage around 1970. I would sit at the keyboard and draw up moods and try different things while we discussed form. He played some drums and percussion. We both sang when needed (with Fiona Crowley lending a voice as well). I performed the bulk of it. This one was very organic as well.

There is a wealth of different ideas in that soundtrack. Again, I had Wayne Crowther help as well. I think he matched our approach perfectly… it all sounds like it belongs together. The opening credits I made as a stand alone piece and I was trying to grasp that jazz/rock/classical hybrid stuff you would hear in movies around the late 60’s and early 70’s.” 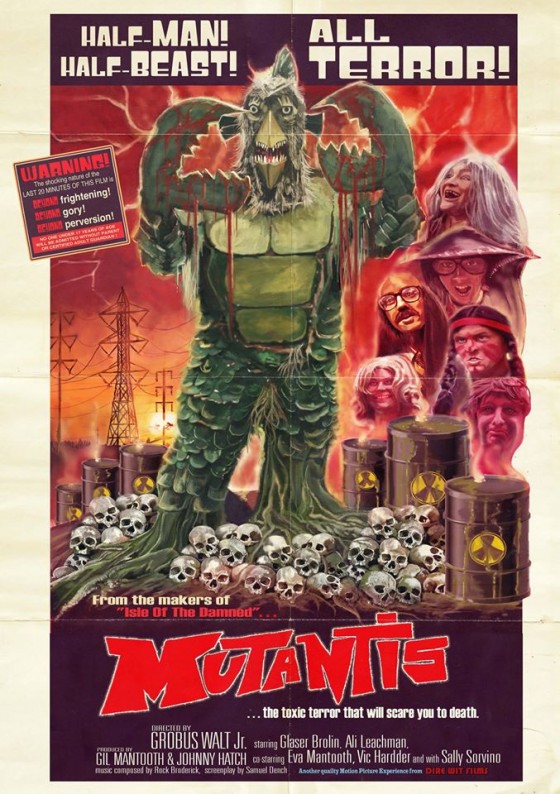 What drew you to Cinema Wasteland?

“I heard about CW through the Marks. They had gone before I was involved with DWF for a screening of POTD. They always said it was a great con and I really wanted to attend. CW screened 7th Day in 2014 and I made the trek from Baltimore.

I was really excited because CW has a reputation for truly being all about the films and that interested me. What a great experience. The crowd received 7th Day very well and we submitted Mutantis afterwards and it got in for 2015. We got a vendors table this time and it was a huge success for us. We sold out of Mutantis! I should extend extra thanks for the king of CW, Ken Kish. He has been VERY supportive and he really gave us a path to extend our reach. We are very appreciative!”

Was the trip to CW worth the experience and how was the crowd response to the movie?

“This trip was 110% worth the experience! I would go again in a heartbeat! We got there a little later then intended (about a six hour drive) and missed the screening. I heard from multiple sources that it kept the healthy crowd for the duration of the film and was very well received. We saw the proof at the table and in sales. I will sum it up with my favorite quote of the weekend.,”This is the best movie I have ever seen, better than The Avengers”. I did not say that, I can’t help what a fan says!”

Trust me, it was a real quote! I was there and I know from whom it came. You laugh, but trust me, this movie is a thing of twisted genius! Is it really better than The Avengers? Well let’s put it this way: I don’t own an Avengers shirt, but you better believe I own a Mutantis shirt now!

Mutantis is available on DVD from Amazon.com.