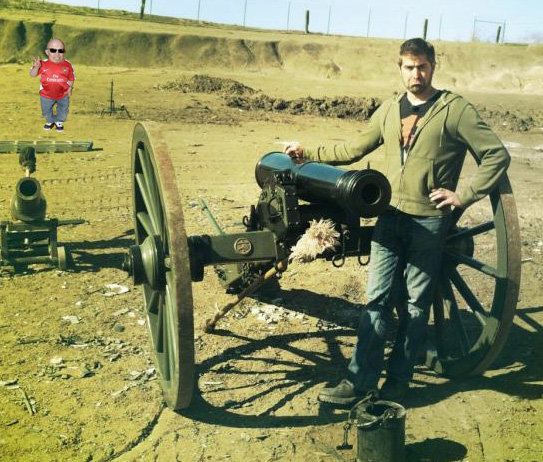 The only reason I watch Mythbusters is on the off-chance I might catch the episode where someone is horrifically disfigured and/or brutally killed during one of the gang’s zany stunts. Well, as luck would have it, both of those things nearly happened on Tuesday while the crew was filming an episode on a bomb disposal range involving an oldy time cannon.

The cantaloupe-sized cannonball missed the water, tore through a cinder-block wall, skipped off a hillside and flew some 700 yards east, right into the Tassajara Creek neighborhood, where children were returning home from school at 4:15 p.m., authorities said.

There, the 6-inch projectile bounced in front of a home on quiet Cassata Place, ripped through the front door, raced up the stairs and blasted through a bedroom, where a man, woman and child slept through it all – only awakening because of plaster dust.

Damn! That’s one magic cannon ball. It’s like the JFK bullet or Roger McDowell’s loogie. But it wasn’t finished.

It exited the house, leaving a perfectly round hole in the stucco, crossed six-lane Tassajara Road, took out several tiles from the roof of a home on Bellevue Circle and finally slammed into the Gill family’s beige Toyota Sienna minivan in a driveway on Springvale Drive.

Even though nobody was maimed, that’s impressive… most impressive. General Sherman would approve.