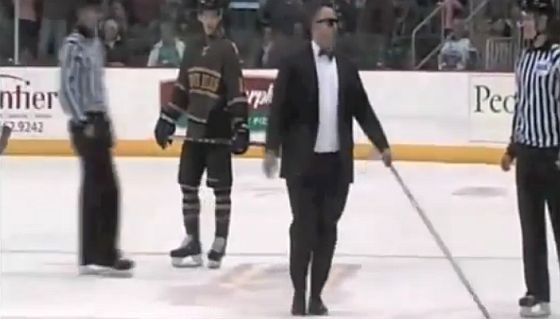 One of the oldest jokes about game officials, and one that is sure to get a coach run, is to accuse them of being blind. The insult is so ingrained in sports that the blind ref has become a common Halloween costume. One NAHL assistant coach apparently couldn’t wait for October to show off his version of the outfit, something we thankfully have on film thanks to our friends over at Yahoo’s Puck Daddy blog.

Wenatchee Wild Assistant Coach Chris Clark, upset with the officials during a game with the Kenai River Brown Bears, donned a pair of dark glasses, wielded a hockey stick as a cane, and proceeded to fumble around on the ice for several minutes before finally getting the boot from the unamused officials.

After the passing of former Orioles’ Manager Earl Weaver last week we worried that we would never see his like again, but Coach Clark shows us that as long as officials make bad calls coaches will go over the top to express their displeasure.