Sports > Other > NASCAR Teams Attempt To Kill Each Other

NASCAR Teams Attempt To Kill Each Other 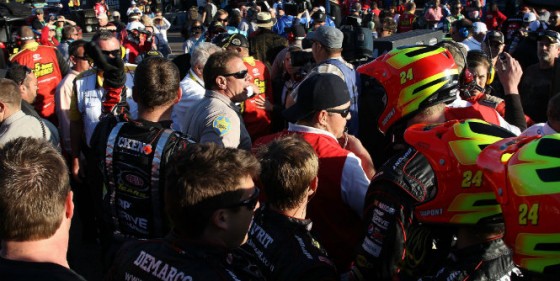 While a sixth place finish in the AdvoCare 500 likely earned Brad Keselowski his first Sprint Cup title, it wasn’t the headline from this weekend’s Phoenix race. The best action of the season’s penultimate race occurred in the NASCAR garage, where #15 car driver Clint Bowyer attempted to assault Jeff Gordon.

The fight started when Gordon, already out of title contention, wrecked Bowyer late in the race. The accident, which Gordon claimed was retaliation for run-ins earlier in the season, effectively ended Bowyer’s chance to catch Keselowski. The crews were already facing off in the garage area when Bowyer, incensed at Gordon, hurdled a pit wall and took off for the garage at a full sprint. It took nearly a dozen crew members, sheriff’s deputies and NASCAR officials to keep the two from coming to blows.

Keselowski, who was the biggest beneficiary of the wreck, had harsh words for Gordon.

“Retaliation is out of control in this sport. We’ve got a bunch of drivers that feel like they have to retaliate or they’re being challenged as a man, and that’s ridiculous. It’s not what this sport needs. I don’t think it’s good for anybody, and somebody’s going to get hurt.”