We recently had a piece about Mother Nature’s battle beasts, the mammals, doing everything they can to maul the crap out of you. But the one thing each and every one of those animals had going for them was their sheer size and horn-and-tooth sharpness. But what about the little guys, what do they have protecting them? Bodyguards? Shotguns? Well, no, but they do have an ass-load of poison that will drop your weak human ass in a failing heart beat. The little, unassuming critters that roam the land, sea, and air have no other recourse but to pack themselves with enough deadly venom and toxins to drop an entire race, lest they become food for any and everything faster and smarter than them. So, look ahead into a collection of the most questionable, yet unmistakably deadly little critters on Earth. 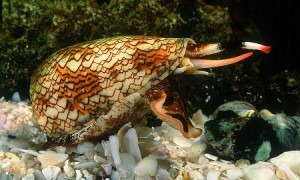 A snail. Are you shitting me? Help, it’s a… snail. No, no I am serious here! This thing is wicked! Even its shell is shaped like an ice cream cone! Okay, now I know you’re making this up. Fine, you step on one then, and see if you don’t call me from the E.R. crying like a bitch! Each of these snails, specifically the ones found off the coast of Australia, have a deadly toxin found in the tips of their primary hunting weapons; a tooth-like ‘harpoon’ that they use to subdue much faster prey. If you squish one under your feet, be ready for the surprise of your soon-to-be-shortened life, as their toxins (called conotoxins) can pretty much stop your heart. Just don’t put one to your ear, stupid. 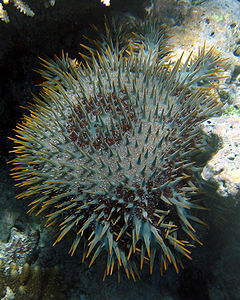 Count your blessings you don’t live in Australia. Unless you do, in which case, are houses cheap? Anyway, even without worrying about the oppressive heat, giant insects, and evil kangaroos, now you’ve got this nasty sea star to contend with. Let’s say you’re out meandering around by a big coral reef when, OUCH! you stomp right on one of these guys! Producing a neurotoxin in each of its pretty purple spines, just the injection of a few of these thorns can cause intense pain, vomiting, temporary paralysis, and an infection that could, eventually, make you less alive. And don’t bother wearing protective footwear, ya know, unless it’s a plate-mail boot, because they’re sharp enough to go right on through. To the other side, even. 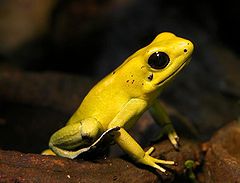 Wondering why certain animals that look so damn purty are so wont to ‘F’ you up? Well, it’s supposed to be a deterrent to predators to not want to mess with them. Humans, on the other hand, are unadulterated dunderheads and pretty much grab anything that makes them grin. Including this deadly little fellow right here. The Dart frog comes in a variety of delicious flavors like mint green, orange, and yellow but in no way taste like Fruity Pebbles. The poison on the skin of these little guys is literally strong enough, in a single dose, to kill 25-30 full-grown humans. It is called an alkaloid poison which basically prevents muscle nerves from creating impulses thereby leaving them in a constant state of contraction. This is really not so good for your heart. At all. And now you know why natives rub frog skin all over their penises… I mean darts. Knowing is half the battle. 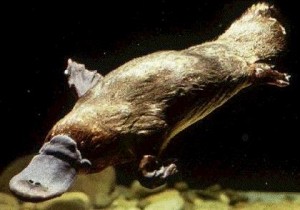 What? A poison mammal? And it lays eggs? Okay, I’m not going over this: everyone knows what a platypus is. However, few people know that the male platy has little spurs on its ankle. No, really. Fine, let’s imagine for just a second that you are the first scientist or mailman or interior decorator or whatever to have first stumbled upon this critter. Part beaver, part duck, part otter, part egg-layer, with poison spines? I think only a gun shot to the head would clear your mind of this affront to nature. But here we are, living with this beastie, and trying to avoid getting stung by it. The toxins are primarily defensin-like proteins (DLP’s) and are specific to the critter. What we do know is they hurt. 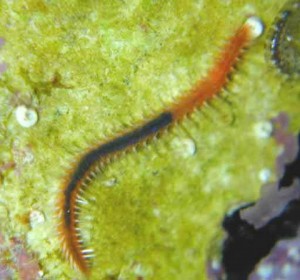 Take one of nature’s most basic and long-lived creatures and then ask yourself just how it’s managed to continue existing through millennia. Well, I’ll tell you: poison. Bristleworms are segmented worms and are in the family polychaete, class annelid, third desk from the front. Each one of their body parts contain tiny, hair-like bristles that can and do penetrate the skin and can cause nasty rashes and pretty intense pain. But the worst part is that they bite! A lot! Picking one up -something I highly recommend avoiding- is sometimes necessary if you’ve happened to get one for a fish tank (as they are great scavengers) and it’s gotten out of hand. Just be prepared, assuming you’re not listening to me at all, for some nasty redness, inflammation, and gender reassignment. Okay, I made that last one up. 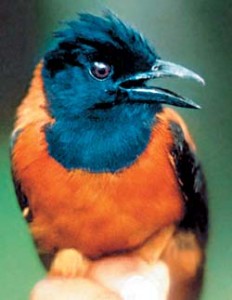 Sounds like some really rad weed, doesn’t it? Dude, the fatty stuffed with Hooded Pitohui is makin’ me want to eat a box of tacos! But it’s not, so stop asking your dealer. What it actually happens to be is a bird. Though it’s not poisonous per se, it does carry toxins on its feathers and skin likely from whatever bugs it likes to eat. The nasty stuff is a neurotoxin called homobatrachotoxin and it causes stinging, tingling and swelling for whomever or whatever chooses to touch it. So, I guess, in a way, this could be considered a drug since it sounds kinda fun to me! Anyone bring the Pitohui? 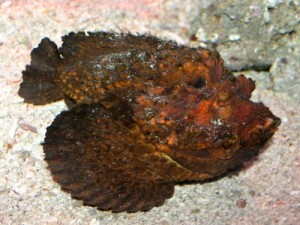 This fish has the distinct talent of being titled ‘The Most Poisonous Fish’ in the world. Wow, I wonder how long the voting committee was out on that one. This specific fish is primarily found in the ocean, though there are some who are after you and have managed to swim up rivers to be closer to the humans they love to sting. Going by the opposite principle of the colorful animals who rely on their striking hues to ward of predators, the stone fish are hideous monstrosities that use their guise as being grotesquely ugly to hide from their fishy prey. Then, when the stupid little food items swim by all unawares and full of glee, SNAP! Lunch. But, the hidden danger is on the backs of these repugnant creatures where a series of spines full of nasty neurotoxins can stand upright and pierce unwary passersby. Wow, ugly and dangerous. Sounds like Britney Spears. Zing! 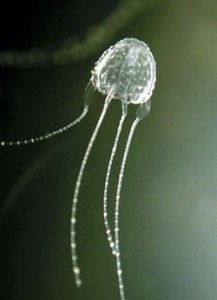 Picture a serene, glistening beach -stark white sand, pristine, shimmering water, a wonderful, cooling dip in the surf- where everything is just perfect. Then blinding agony lances up your legs, permeates your body, and turns your whole being into white-hot, blinding fire. What the hell? You didn’t step on anything, nothing bit you, as far as you know you’re clear of Herpes, and god hasn’t smote you in over a week. So what in the world is going on? You, sir or madam, have just fallen victim to one of the smallest and least seen jellyfish: the Irukandji. So, after a little while, here’s a laundry list of what else you can expect from the toxins found in the tentacles of these killers: headaches, nausea, restlessness, sweating, vomiting, high heart rate and blood pressure, and psychological phenomena (such as the feeling of impending death). Feeling of impending death? WTF! Fortunately the mortality rate isn’t quite as high as it once was, though people do still die from multiple attacks, just remember, while you’re suffering like a dog in the hospital, you were attacked by a wad of snot. Congratulations.