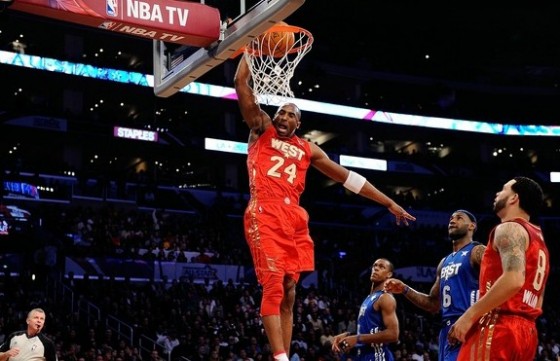 The NBA enjoyed another liquor-laden weekend of debauchery in Los Angeles for the 2011 NBA All-Star Game, and after a brief rest for the hardwood faithful, recovering from hangovers and wondering what was, what is to be, and what lessons were learned… we move forward with the NBA season.

The lasting memories from the league’s best party weekend? Blake Griffin took the Slam Dunk title by jumping over a car while a choir set the scene…

… and to be honest, we’re not sure why that’s relevant, but it seems to have earned rank among the masses as the highlight of the weekend (we’d suggest the new “Go Dunk Yourself with Blake Griffin and Subway” campaign is much more significant and entertaining).

… vaulting him to honors as the game’s MVP was the moment of choice. If that’s your stance it would seem you give weight to the trophy presented to the most valuable player in the game’s least valuable game. We do not… Kevin Durant has one of these on the mantle and most of you continue to recognize LeBron as the game’s best (you’re wrong, but regardless… it proves the All-Star MVP trophy means dick).

For us, the game is about one thing – whether it’s the All-Star Game, the Dunk Competition, the Skills Competition, the Shriners vs. the Free Masons Charity game (is that no longer an event?), or the NBA regular season: the game of basketball is about entertainment… and with the exception of Rihanna, we were not.

However, one consistent theme we found throughout the coverage of the NBA All-Star weekend providing undeniable entertainment may not have caught you attention. While most were putting focus on the events ON the court, we were noticing trends found OFF the hardwood. In fact, we noted a trend in entertainment options being shared by the celebrity basketball masses in attendance this weekend… and after hours of research and diligent review of media coverage surrounding the NBA during the first half of the season, we’ve found that trend has been taking form right underneath our noses throughout, and that trend is this…

… the professional basketball world has fallen in love with reading. And when most of the freakishly tall are reading, they are often found reading the new book, “The Undisputed Guide to Pro Basketball“, penned by the king of the basketball blogosphere, Bethlehem Shoals and the FreeDarko High Council. We received a promotional copy of the book from the folks at FreeDarko and Press Box Publicity (big ups to Adam for hookin’ a brother up), and we haven’t been able to put it down.

After diving into recent coverage of the NBA and the offerings from All-Star weekend, we find we are not alone.

Blake Griffin beefed up his preparation for the Slam Dunk Title by pissing off Mike Dunleavy, and nothing pisses Mike off more than reading.

Dwight Howard stopped to sign a few copies of  the new book for the kids… ’cause it’s always about the kids. 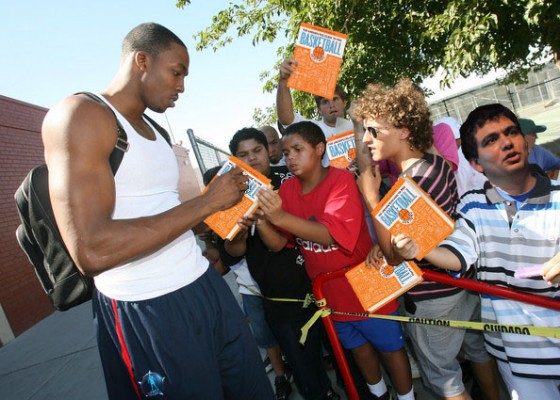 Craig Sager stopped to talk fashion with Dwyane Wade, and took the opportunity to share the new FreeDarko book with Miami’s best. 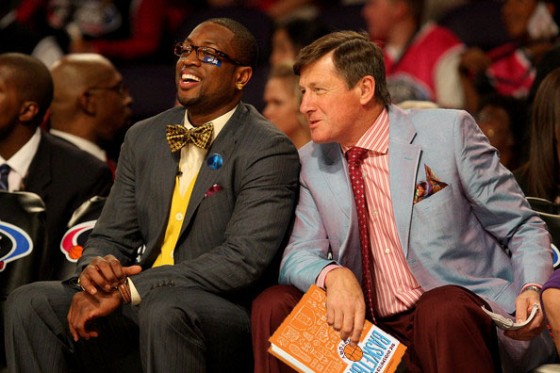 Bill Walton may be best known as a Celtic, but he shared his passion for FreeDarko with legendary Lakers announcer Chick Hearn. 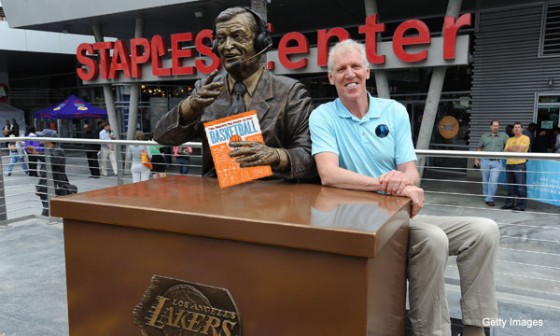 Derrick Rose doesn’t talk much… but if he learned anything from John Calipari,  it is the joy of a good read.

(They may not attend class down in Memphis… doesn’t mean they don’t enjoy the library.) 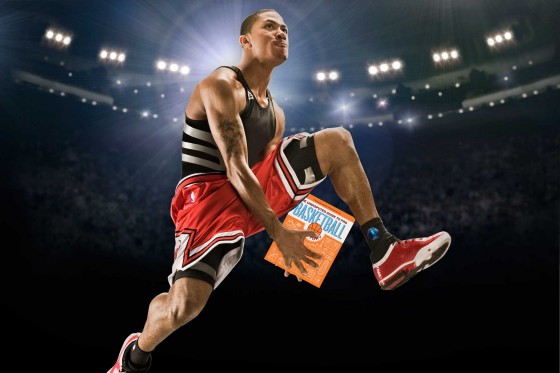 When Mikhail Prokhorov isn’t getting fleeced by the Nuggets or the Jazz, he’s working out his body and mind to the educational blessings of FreeDarko. 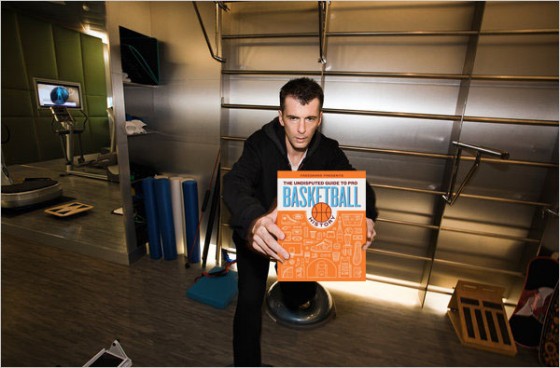 JaVale McGee… the true champion of the dunk in 2011, a true student of the game and an insatiable lover of basketball history.

After nearly one full decade in the league, we’ve learned three things about Yao Ming: (1) he loves Ric Bucher, (2) he has a humongous head, and (3) he loves “The Undisputed Guide to Pro Basketball”.

Chris Webber may be earning respect as favorite in the broadcast booth these days, but reading the historical perspectives of FreeDarko got him so pumped he pulled the old garb out of the closet and tried to get back in the game. 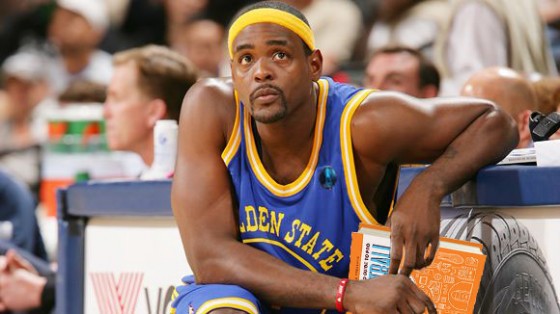 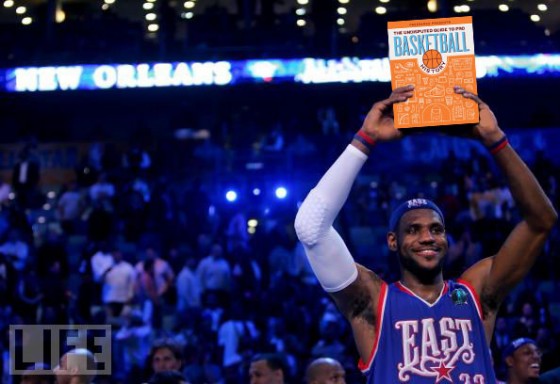 Maybe you think Ron Artest and reading don’t go hand in hand. You’re wrong, and when Ron Artest takes a break from installing car stereos at Best Buy, or from punching the drunk low-life basketball fans of Detroit in the grill, or from winning rings… he’s reading “The Undisputed Guide to Pro Basketball”.

(And don’t worry, Ron… all is forgiven. We’d like to punch Detroit in the face, too.) 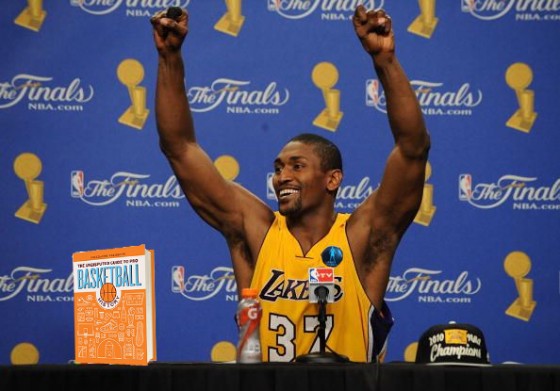 Kobe and LeBron, fighting over an advanced copy of Bethlehem’s guide to basketball salvation.

(This has to be one of the earliest sightings of the book… LeBron was not only in Cleveland, but he was kind enough to pretend he gave a shit about defense.) 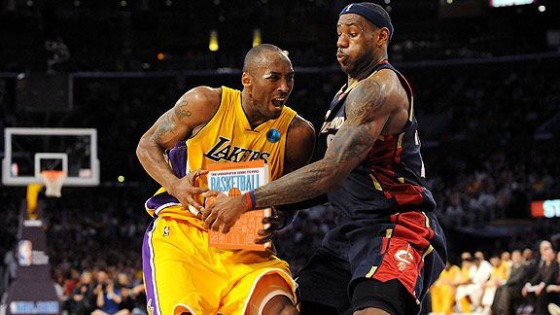 The book is also an international phenom… like Rick Rubio, lucky enough to gain one of the first Spanish copies of the Guide. Color us jealous. 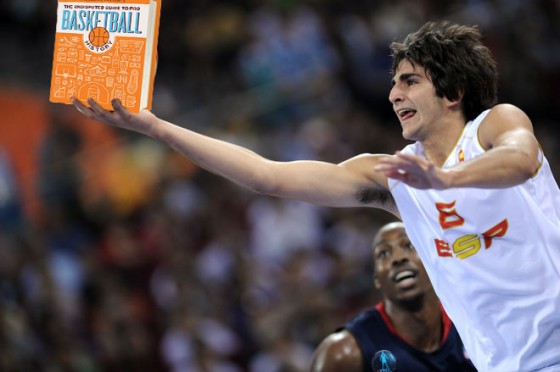 The fans have spoken, Bill Simmons… they don’t give a fuck about Jersey Shore, they think you’re buddies are a bunch of assholes, and they think it’s about time you read a REAL book about basketball lore… especially since you scrubbed the boys from your own, you unbelievable prick.

The boys on the set of the best NBA show aren’t ashamed to show their love for FreeDarko either. 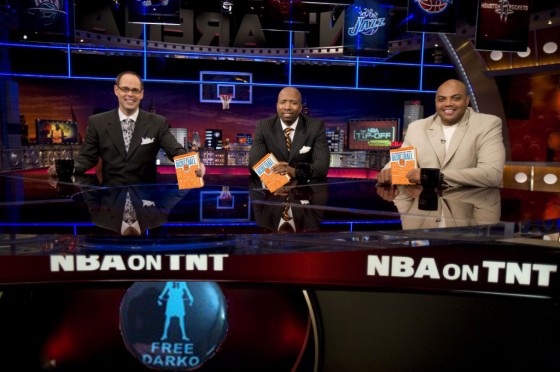 Marv Albert took time away from announcing and his biting fetish to share his copy of the Guide with Jimmy Kimmel. 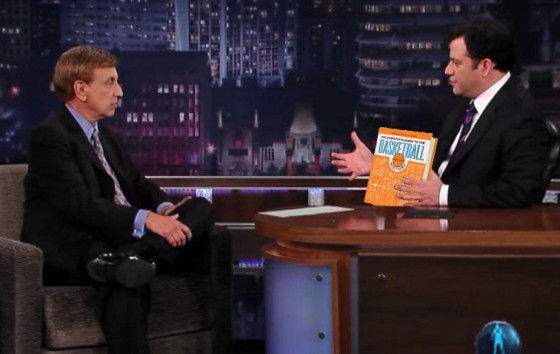 Michelle Money rejected her rose and asked that Bachelor dumbass for her copy of the Guide back before returning to Carlos Boozer. 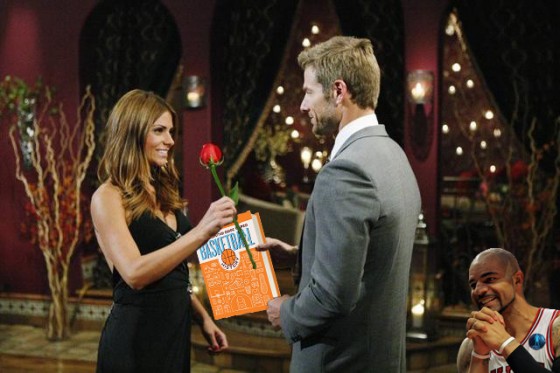 The Biebs shared his copy of the Guide with Denzel Washington, right at courtside in Staples. 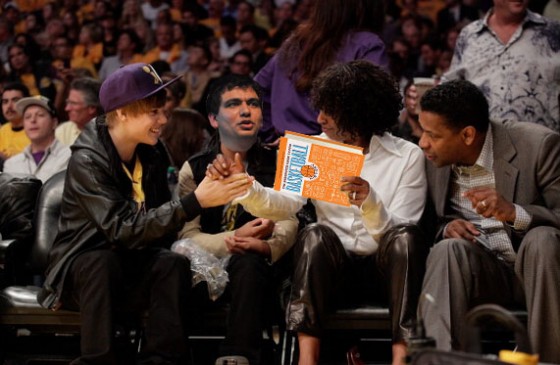 Snoop D-O-Double G spent his time during the big game handing out free copies of the Guide to illiterate gang members in LA. 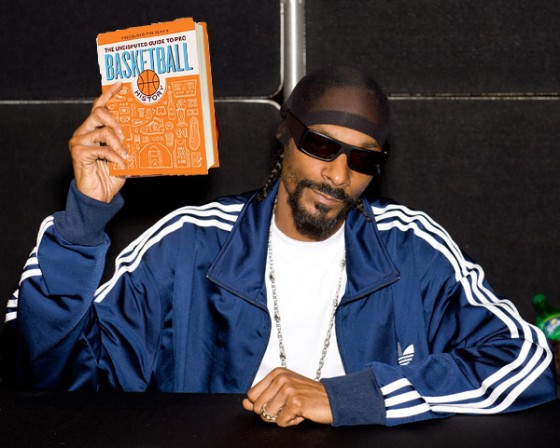 Our favorite pop sensation Cee Lo Green rocked the house for Crown Royal and then shared a few cocktails with the Guide.

Clearly the boys from FreeDarko are the toast of the NBA/pop culture crowd… but, as any basketball fan knows, no one loves the hardwood more than Spike Lee… and based on what we’ve witnessed since it’s release, no one loves “The Undisputed Guide to Pro Basketball” more than Spike.

He’s been sharing copies of the Guide with any and all who might listen, including Beyonce… 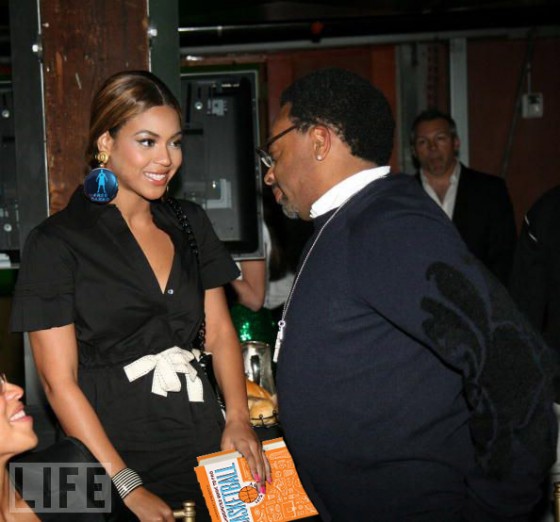 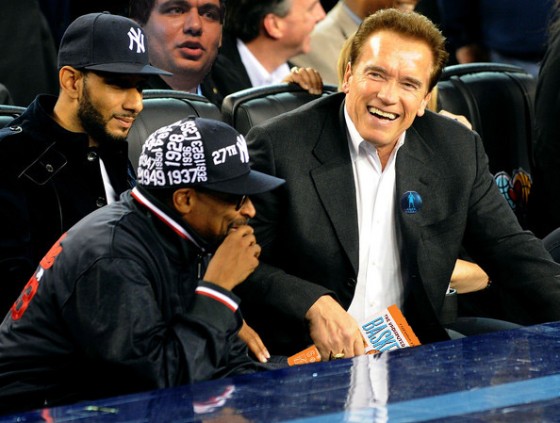 … the king of hip-hop assholes and overrated “talent,” Kanye West…

… the best actor of this or any other generation, the Cinderella Story himself, Mr. Bill Murray… 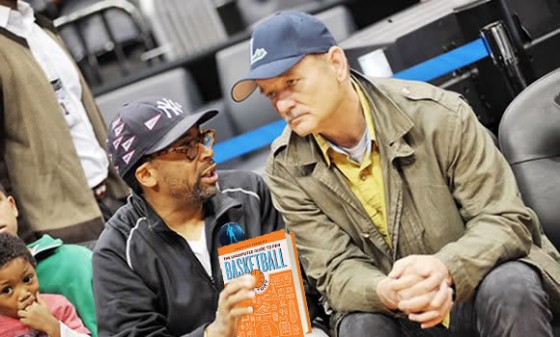 … the honorable (well, maybe not honorable… depends on your view I guess) Jesse Jackson… 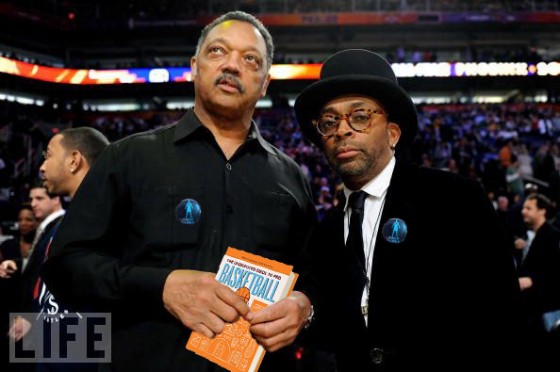 … the new king of comedy (at least for the Jewish set… though that might actually be Jon Stewart… that’s a tough one), Larry David… 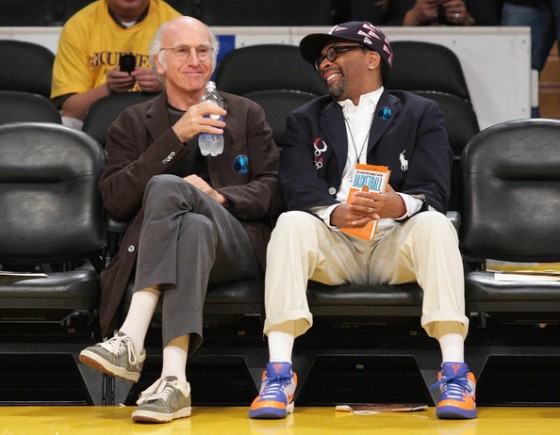 … the legend of Motown, Stevie Wonder (that one… not likely to work out well , Spike)… 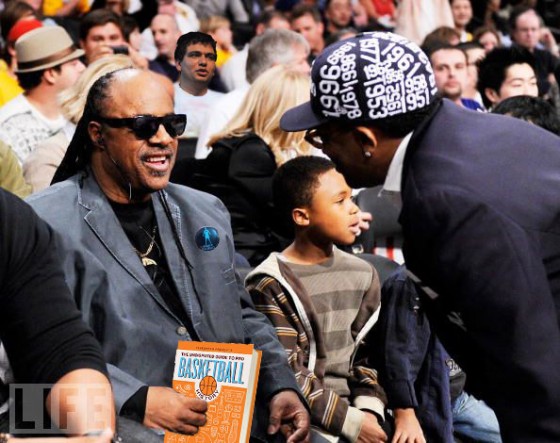 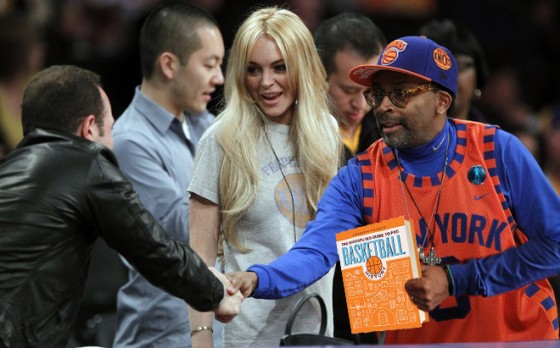 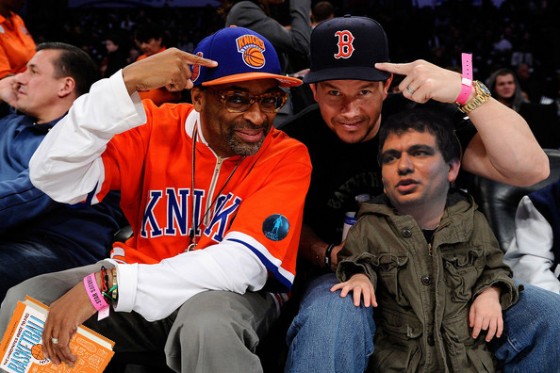 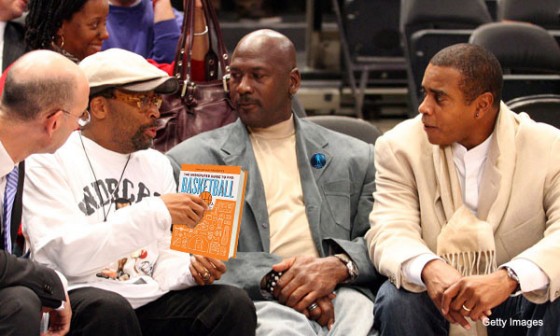 You’ll be happy you did.

(And yes, this is a blatant attempt to kiss ass, show thanks for the free copy of the book, and maybe even get a link on the world’s best basketball blog… but don’t let that distract you from the truth. It is a wonderful read and we want to send sincere thanks to the FreeDarko High Council for putting it together and to Press Box Publicity for sending a copy our way. It’s been one of the best perks of the job and this Photoshopped tribute seemed like the best way to say “thanks.”

In fact, we might even take the next-best step and actually buy a copy. After all, if we’ve learned anything from Spike Lee it may be the true gift of sharing. Give one as a gift, buy one for our own collection. We suggest you do the same.)