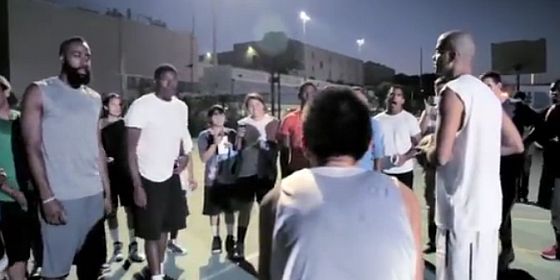 After his Oklahoma City Thunder knocked off San Antonio in the NBA’s Western finals last season we figured James Harden wouldn’t be in a hurry to see Spurs guard Tony Parker on the court any time soon. Luckily for a group of young basketball players a sense of humor, along with AT&T’s advertising dollars, convinced the two “rivals” to stage an early reunion. In this ad for the telecom giant Harden and Parker surprise a group of young players, playing an exhibition game of one on one before joining the youngsters on the court. We know the whole thing is staged, but we still enjoy watching it.

AT&T was kind enough to provide a behind the scenes video, which is easily as good as the finished product. Apparently Harden still hasn’t learned how to take a decent shot.