Sports > Basketball > The NBA on TNT is the Best

The NBA on TNT is the Best 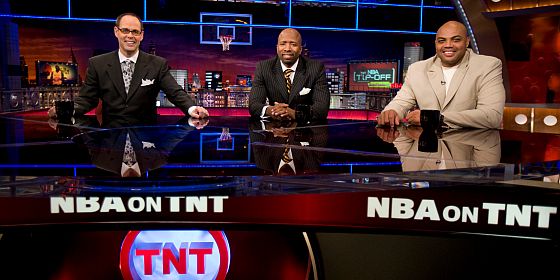 In an effort to keep up with TNT, ESPN spent the offseason retooling their NBA studio show, adding Magic Johnson and Bill Simmons to an already crowded NBA Countdown stage. Meanwhile, TNT has done little to change their own formula, leaving the show primarily in the hands of Ernie Johnson, Kenny Smith and Charles Barkley. While the ESPN show mimics most NFL shows, with its crowded cacophony of noise, the TNT crew continues to dominate with their mix of analysis and comedy.

We’ve seen plenty of examples of the unique approach TNT has taken, but few as fun as a pair of moments from Thursday’s show. In the first one, Charles Barkley makes a “Lincoln” inspired slavery joke that no one else in sportscasting could get away with.

Then, as if to prove that Ernie isn’t the only target on the show, Kenny Smith decided to take a piggy-Shaq ride, mounting Shaq and riding him around the studio until he gets bucked off.