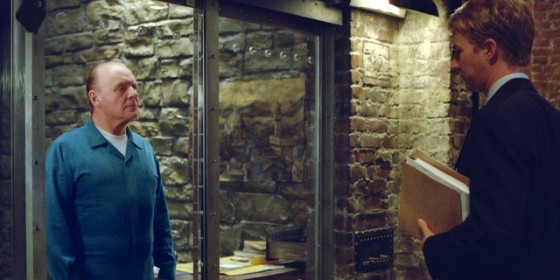 In their continuing quest to adapt every film made between 1986-1995 (Parenthood, The Firm), NBC has ordered 13 episodes of Hannibal, a series based on the characters from author Thomas Harris’ novel Red Dragon, which of course introduced the world to everyone’s favorite cannibalistic serial killer genius, Hannibal Lecter.

The project is described as a contemporary thriller series featuring the classic characters from Thomas Harris’ novel Red Dragon – FBI agent Will Graham and his mentor Dr. Hannibal Lecter – who are re-introduced at the beginning of their budding relationship.

Has anyone at the network seen the Lecter movies? They’re not exactly primetime material, what with all the grisly murders and eating of flesh. Then again, the numerous Law and Order incarnations do tread edgy terrain, so maybe it could work.

I dig the Graham-Lecter dynamic, and it would be interesting to expand on it further, but I’m not quite sure the plucked peacock has the muscle to pull it off. I mean, who the hell is going to follow in Anthony Hopkins’ footsteps? Not just anyone can play cinema’s most terrifying madman. At least NBC is trying to remove themselves from the ratings sewer. Although, methinks they’re grabbing at the wrong rope.