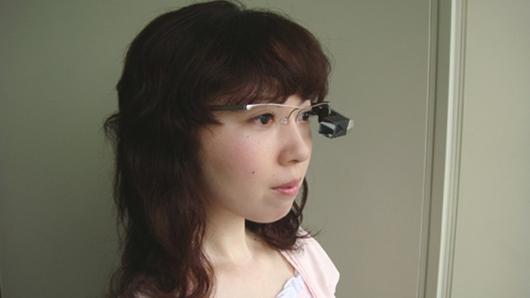 They make you look like an extra on Star Trek.

In Japan’s continuing quest to turn the world into a place completely controlled by crazy technology, NEC has announced a pair of glasses that, among other things, work to translate foreign languages. The device has a small microphone attached to it that picks up the audio from whoever you’re talking to. The sound recording is then sent to a small computer worn around the user’s waist (and really, what better way to carry around a computer?), where the data is in turn transmitted to a remote server. The server translates the speech into text, the text gets sent back to your stomach PC, and it then appears in the retinal display mounted in front of the glasses. The text shows up in your peripheral vision so as not to distract you from whatever you’re looking at, and you can also get an audio translation through an earpiece. 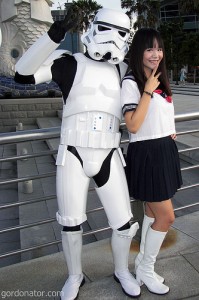 Admittedly, the gadget’s translation capabilities are pretty limited at the moment, but it’s being marketed to have other uses as well. For example, a sales rep could have info about their potential customer beamed into their vision during a conversation. Or a technician could use it to consult a user manual without having to use his hands. Personally, we hope it can be used to have the text of Sports Illustrated scrolled across your eyes while you pretend to pay attention at an office meeting.

Starting in 2010 they’ll be sold in sets of 30 at a cost of 7.5 million yen, or roughly 82.5 thousand USD, not including the cost of the translation software. Unfortunately, this puts it slightly out of the price range for everyday people like us who just want to take a trip down to Tijuana without having to learn basic Spanish. NEC spokespeople claim that the high price will likely be offset by the appeal of having the representatives of those who buy the glasses look like intimidating cyborgs. That’s a compelling argument, but whether they’ll be effective tools for the business world or will instead cause hilariously offensive incidents due to mistranslation remains to be seen.