Shoot Someone With New Nerf Blasters

Nerf is back at it with a whole new line from its N-Strike Series. They have taken some of their most popular blasters and made them clear. Which ones got stripped of their black and yellow armor to show how the insides of the Nerf blasters work? Well it is the Nite Finder, the Recon CS-6, the Deploy CS-6, and the Maverick. All of these four classic Nerf blasters will be available in August. Why is Nerf “clearing the way” on these blasters? Well Nerf will be unleashing a new blaster in that series on September, 9th which is the Nerf N-Strike Stampede.  Here is what Nerf told me about the Stampede.

It is the first fully automatic NERF Clip System blaster to date; the N-Strike Stampede ECS blaster features a new pop-out bipod, which doubles as a handle, and a removable shield allowing players to transition to Attack Mode. The Stampede ECS blaster comes complete with one six dart Clip and three extended Clips which hold 18 darts each, offering the highest Clip capacity from NERF that includes a 60 Clip System for the darts.

I was able to test out the other four of the blasters: the Nite Finder, Recon, Deploy CS-6 and Maverick. Let’s take a look at each of them. 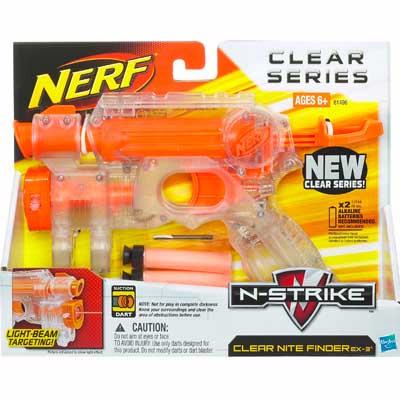 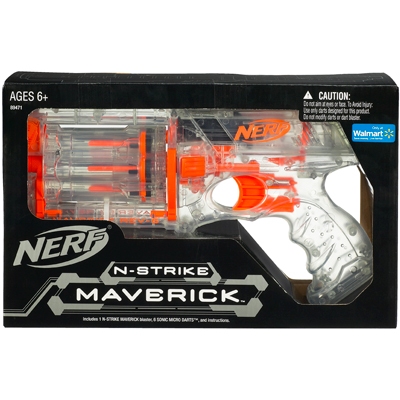 The next blaster is the Maverick. Like the Nite Finder, I found this blaster to be lightweight. You have the tactical rail on top of the Maverick that is compatible with most all of the Nerf N-Strike accessories. The Maverick is like a revolver on steroids. It has the rotating barrel that advances to the next dart every time you pull the trigger. Plus the flip open feature on the barrel makes it a snap to load the darts into the blaster. 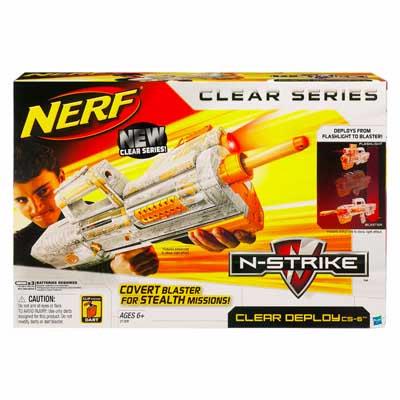 Next up is the Deploy CS-6. To me this is one of my favorites because I have the original Deploy CS-6. Nerf has a tag on this blaster that it should be used for “stealth missions”. The reason is that you can change the pump handle into a flashlight when you are hunting your prey in the dark or confined spaces. Then you can easily change back to the blaster mode to engage your enemy. Another aspect of the Deploy CS-6 is the quick reload clip. You can pop the clip into the blaster to get back into the action faster. Plus you can always upgrade your clip to the double clip holder to hold more darts. To find out about all the sweet accessories log on to www.nerf.com. 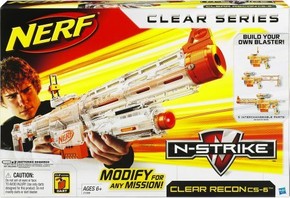 Last but not least is the Recon CS-6. This blaster can transform six ways to Sunday. The Recon  CS-6 comes with a flip-up site, barrel extension, dual –mode light beam that either emits a red dot for targeting enemies or a red light that can be used as a flashlight. Just like the Deploy CS-6, the Recon CS-6 comes with a quick reload clip and a stock at the end of the blaster to steady your shot and hold an extra clip. Plus if you have the Maverick, Raider CS-35, or the Longstrike CS-6 you can use parts of the Recon CS-6 on each of those other guns as added accessories.

So if you are looking for the best in what Nerf has to offer…..look no further than the Clear Strike series. These blasters will keep the enjoyment going for a long time, which will make the wait for September 9th seem to fly by as the anticipation builds for you to get the Nerf Stampede. Don’t just get one or two of these blasters get the whole set. No matter how young or old you are you will love playing with these blasters with family and friends.  For more info on everything Nerf log onto www.nerf.com.