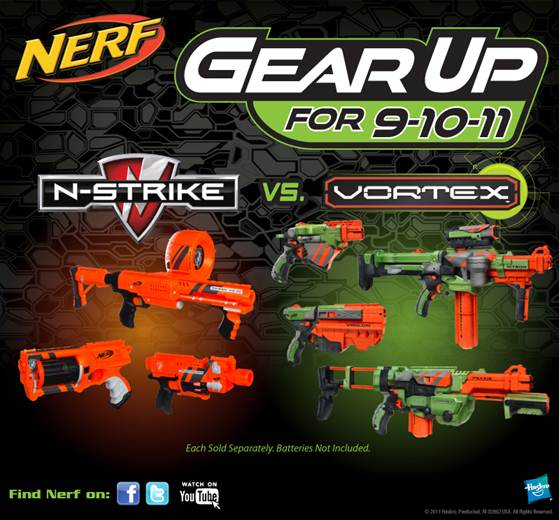 Coke or Pepsi? Dogs or Cats? N-Strike or Vortex? These questions must be answered and I am going to tackle the last one. NERF has a new line of blasters called Vortex! On September 10th the NERF Vortex line will be out to offer fans the latest in blaster technology, progressive styles, and enhanced performance with the new line. Just like the N-Strike series you can customize the Vortex line and now you can add the XLR -disc technology. I had a chance to check out the blasters from the N-Strike series and Vortex. Here is the breakdown of the blasters. Which side will you take? 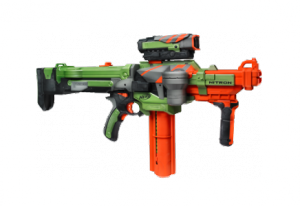 The Nitron is the first fully automatic, clip fed disc blaster in the NERF VORTEX line. The Nitron blaster features a removable clip that can hold up to 20 discs, an Electronic Targeting Scope accessory, a front handle to help steady your shots, and the Tactical Rail System compatible with most VORTEX and NERF N-STRIKE Mission Kit accessories (each sold separately), the VORTEX Nitron blaster embodies the ultimate in innovation and technology within the VORTEX series. The NERF VORTEX Nitron blaster requires six “C” batteries, not included. Electronic Targeting Scope accessory requires two “AA” batteries, not included. This blaster will sell for $39.99.

The NERF VORTEX Praxis blaster is designed for long range disc-shots, this pump-action blaster features a 10 disc clip, removable shoulder stock and Tactical Rail System. Compatible with all VORTEX and most NERF N-STRIKE Mission Kit accessories like scopes and sights (each sold separately), the Tactical Rail System allows users to create one of the most epic N-STRIKE and VORTEX blaster hybrids yet! The Praxis will sell for $24.99.

The NERF VORTEX Vigilon blaster offers rapid-reload capabilities and features a built in disc clip. Simply release the drop-down clip with the push of a button, place in up to five VORTEX discs, and activate the pull back mechanism to fire. The VORTEX Vigilon is also compatible with the NERF Tactical Rail System and most NERF N-STRIKE accessories and will sell $15.99.

When you need that last shot to secure success, grab the compact NERF VORTEX Proton blaster. This single-shot blaster comes with 3 VORTEX discs. Simply pull out the back chamber to load one of the discs and blast away even while you’re on the move. The Proton sells for $9.99 and no batteries are required. 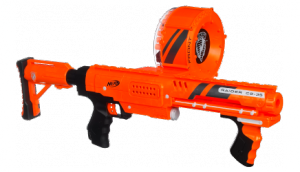 The NERF N-STRIKE Raider Rapid Fire CS-35 blaster is ready to to take on the new NERF VORTEX lineup! To prepare fans for the launch of the NERF VORTEX collection this fall, this favorite NERF blaster features a 35-dart drum magazine with a unique, new NERF design, 15 awesome customized deco darts, and 35 Clip System darts for a total of 50 Clip System darts. By holding the trigger and pumping, players can instantly transition between “single” fire and “slam” fire mode, unleashing a rapid stream of darts. Customize your blaster for each mission using the included removable shoulder stock and Tactical Rail System. No batteries are required and will sell for $29.99. 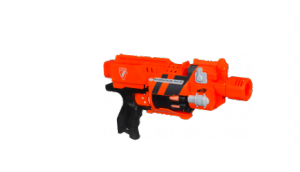 The Barricade will take your blasting skills to a new level with the motorized, semi-auto NERF N-STRIKE Barricade RV-10 blaster and its revolving dart barrel that will unleash a powerful stream of darts. The N-STRIKE Barricade RV-10 blaster features a unique orange color and comes with ten basic whistle darts and five deco darts featuring a new styling. Requires three “AA” batteries and will sell for $14.99. 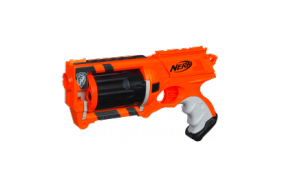 The NERF N-STRIKE Maverick REV-6 blaster features a six-dart rotating barrel with easy flip loading so you don’t have to waste any time while blasting enemy targets. The N-STRIKE Maverick REV-6 blaster will feature a unique orange color and styling! To complete the look, this blaster also comes with four deco darts in addition to six basic whistle darts, the traditional pull back mechanism, and an auto-advancing barrel. No batteries are required and it will be sold for $8.99.

All of the blasters will be available at most major toy retailers nationwide and on HasbroToyShop.com.