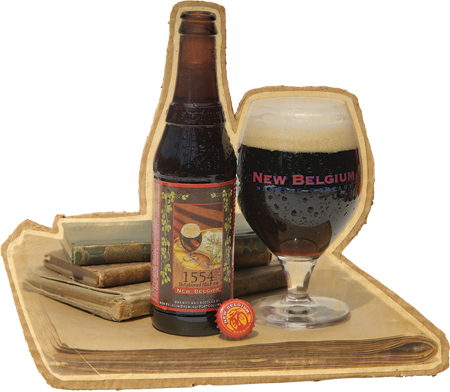 New Belgium says:
Born of a flood and centuries-old Belgian text, 1554 Enlightened Black Ale uses a light lager yeast strain and dark chocolaty malts to redefine what dark beer can be. In 1997, a Fort Collins flood destroyed the original recipe our researcher, Phil Benstein, found in the library. So Phil and brewmaster, Peter Bouckaert, traveled to Belgium to retrieve this unique style lost to the ages. Their first challenge was deciphering antiquated script and outdated units of measurement, but trial and error (and many months of in-house sampling) culminated in 1554, a highly quaffable dark beer with a moderate body and mouthfeel.

I’ll admit it, it makes a brewing company more appealing to me to know that they’re not a macro-brewing behemoth that saturates my TV airwaves with spammy commercials and produces even worse beer.  And furthermore, to learn that New Belgium is a wind-powered, employee owned company, well it really had me interested in trying their beers.  (Never mind my disdain for the faux-yuppie consumption of Fat Tire at all Chicago hip watering holes–that’s a story for another time).

After looking through the case, I settled on the single-serving (22 oz) bottle of 1554, Enlightened Black Ale.  The Mothership Wit would have to wait.

The pour was lovely–dark but clear body (honestly, almost like a big glass of Coke or root beer without the carbonation), huge tan head, but suprizingly, there wasn’t a lot of smell as I had hoped and expected–it was just a faint aroma of chocolate.  My first sip of the foam produced a less than spectacular result–sort of like a watered-down version of some chocolaty malts. But on further inspection and a couple of swigs in, this was a pretty solid beer.  For a dark ale, as New Belgium points out, it uses a lager yeast strain which makes the beer very smooth and easy to drink (read: the 5.6% ABV will catch up with you quickly if they’re going down easily).  There’s really no hint of a bitter after taste at all and, for a beer that’s advertised as a dark ale, this beer had a nice and clean finish and drank much ‘lighter’ than I anticipated. It was almost like a very nice porter without being quite as heavy.

And as for my earlier crack on Fat Tire, well yes, I’ve had a few of those and they’re actually very good as well, so other than the yuppy part…never mind.  Anyway, as you can see if you check out New Belgium’s site, they offer a very impressive group of beers and I’ll more than likely be sharing my opinion of them in a very similar space soon.  (Like right here…)

Rating: * * *
A very, very solid brew that fans of porter should certainly try.