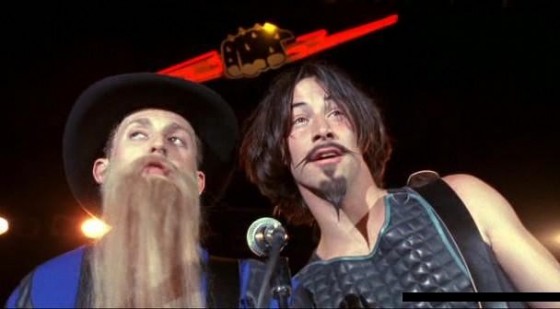 Rumors of a third Bill and Ted movie have been circulating for the last couple of years, mainly because Keanu Reeves keeps dropping hints whenever the topic is broached. Well, he’s done it again, this time in an interview with The Independent.

“Yeah, we have a script,” he confirms. “We’re trying to put it together. It’s a good script too.”

Key word here is “trying.” Just like Dan Aykroyd, Harold Ramis and Ivan Reitman are trying to get Ghostbusters 3 off the ground. A finished screenplay doesn’t mean squat in Tinseltown. If it did, my unsolicited sequel to Joe’s Apartment, tentatively titled Joe’s Quaint Bungalow by the Sea, would’ve been produced years ago. Hell, the least that MTV exec I stalked for three months could do is send me an email acknowledging he received my screenplay along with the six-pack of Keystone Light. I mean, it’s common courtesy.

I digress. A new Bill and Ted movie sounds ridiculous and pointless and two decades too late, which is why I’m 100% on board. Who doesn’t want to see a middle-aged Keanu and the guy who played Bill (I’m assuming he’s still alive) rockin’ out as only the Wyld Stallyns can? Besides, should this come to fruition, it might increase the chances of there being a third Wayne’s World movie, which must happen, if for no other reason than to hear Garth utter this awesome question one more time:

[The independent via Blastr]