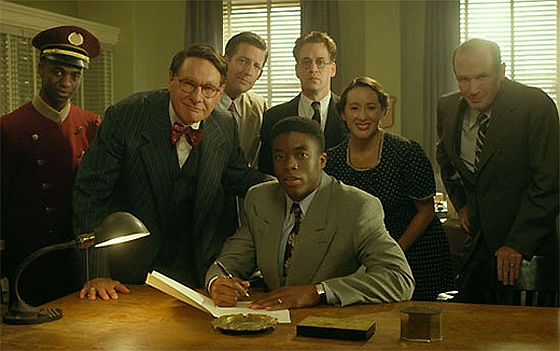 There isn’t a sports movie in 2013 that we are looking forward to more than “42”, the Jackie Robinson biopic. With the release only three months away, the marketing team behind the movie have released their second full length trailer.

Headlined by a relatively unknown actor, Chadwick Boseman, as Robinson, the rest of the cast is star packed for a sports movie. Harrison Ford is cast as Branch Rickey, Alan Tudyk as Ben Chapman and veteran television actors John C. McGinley, Christopher Meloni and James Pickens, Jr. all appear as well. Actress Nicole Beharie is cast as the future Mrs. Rachel Robinson, making it the second time she’s taken on the role as a love interest to a sports legend after she played Ernie Davis’ girlfriend in “The Express.”

After the disappointing flop “Trouble with the Curve” came out in 2012 we’ve been looking forward to “42” with renewed hope. It takes a lot for a baseball film to be a great movie, but with a well-known story and exceptional cast, we think “42” has what it takes to make our top 25 baseball movie list.