Köstritzer Schwarzbier (If you read German, here’s the link) 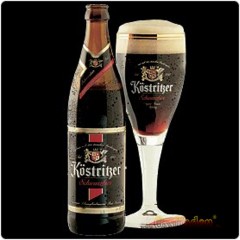 Information: (Label) “ ‘The Black Beer with the Blond Soul’ is a famous speciality that is produced by a small brewery in Thuringia, Germany. Even Goethe -Germany’s most celebrated poet- appreciated the traditional Black Beer.“

So as New Years Eve’s will go around here, it was time for friends and a few different beers I had yet to try. Though we bought four styles, unfortunately only three representatives remain. I guess we finished the other type, I honestly don’t remember. But in any case, this is the first part of three focusing on the surviving members of the ’09 farewell beers.

First off, the pour itself yields a very dark and rich brew that allows just enough light through to be called a dark enough Amber color that borders as black as it’s going to get. It effervesces very nicely producing a decent head that slowly fades into the Schwartzbier’s typical white halo. The scents are alive with mochas and malts with a nice hint of fruity hops. You can tell that, due to the roasting techniques of said malts, there is a hint of chocolate in there as well.

The taste is rich and creamy with a full, slightly espresso-like body. And, reminiscent of the coffee it reminds one of, is the roasty and toasted flavors that fill your mouth. It is as good a Black Beer as I have ever had and, unlike both Stouts and Porters, it tends to be far less thick and heavy. For anyone who is a lover of dark beers, this style can not come more highly recommended. Since there is such a similarity to both chocolate and coffee, I would (and did) certainly match this with a rich cheese course or even with a dessert fare featuring cordials or just a box of chocolates.

Rating: * * * * 1/2
An outstanding representative of the Schwartzbier family.