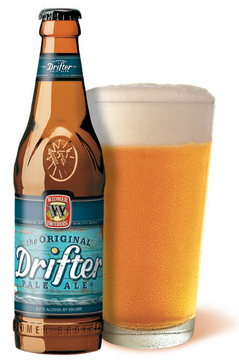 Information: (Site) – “With its unique citrus character, smooth drinkability, and distinctive hop character, Drifter Pale Ale is truly an original. Brewed with generous amounts of Summit hops, a variety known for their intense citrus flavors and aromas, Drifter has a taste unique to the Pale Ale category. True to style, the bittering hops are perceptible enough to give the beer a crisp, clean, quenching finish, yet also soft enough to keep the beer smooth and balanced.”

New Years Eve couldn’t be a better platform on which to try a few new and different beers. So, after purchasing a quartet of said styles, and beyond the aftermath of the night, only three styles remain in tact with a few representatives alive to tell the tale. This beer is the second, and it, too, must soon go the way of its fallen (see: delicious) brethren.

A light Amber pour with a centimeter’s worth of a white crown. The nose is a blast of citrus rinds and fruity hops that pleasantly tickle with a modicum of bitterness. But there’s something more. With what’s written you could easily discern just about any IPA on the planet… but this has a little something different beneath the grapefruit and hops: strawberries. Possibly even melon. Uniquely these scents could be found utterly different from another taster, but to me, it’s a fruit salad and a damn fine one at that.

The sip is bitter, no doubt, but not cloyingly so. It’s not as shocking as a heavier IPA or a Two-Hearted (Bell’s) style, but it’s there just long enough to be known, and then it’s gone to make way for the other flavors. And the fruitiness is just as subtle in the flavor as it is in the smell, but that’s just fine with me. This is by no means a fruity beer by any stretch, but the citrusy hops and the duller backdrop of berry and honeydew is just happily unmistakable. This is a Pale Ale that not only shines as a selection all its own, but stands proud as something better than an IPA ought to be. Serve with a grilled bird. No doubt.

Rating: * * * * 1/2
A delicious and citrusy Pale Ale that delivers far more than its brethren.