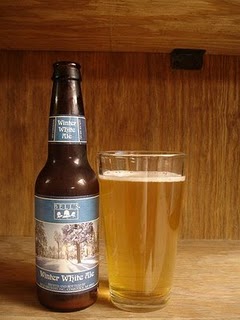 Information: (Site) – “A Wheat Ale brewed with American Wheat and a proprietary blend of Hefe and classic Belgian-style yeasts. A refreshing winter alternative created from the subtle fusion of two classic flavors.”

Ya know, there’s nothing like living in a state that offers up such a vast variety of local microbrews. If I want a Bell’s – of any type, mind you – I merely need to drop over to my local store and tada. Or, I can head a few miles downtown and stop by Bell’s itself. This beer is an institution here in Michigan and, not that I like to brag, but this beer is only offered in 5 states! Pretty cool. And what better beer to serve on New Year’s Eve (the third beer, mind you) than a Winter Ale.

The pour of this soon-to-disappear ale is light, frothy, and very aromatic smelling heartily of its classic Belgian roots: coriander, citrus rind, yeast, and a subtle grassiness. It certainly isn’t clear, belaying its opaqueness with sharp yellow hues and a swirl of its unfiltered remainders floating around till it slides to the bottom of the glass. It’s a pretty beer, no argument there.

The flavor, after the requisite swirl, is sharply German (its Belgian style is quite prevalent) and crisp with a bitter, yet not distasteful, throatiness and a clean finish. The wheaty overtones (made from locally grown grains, I might add) give this brew it’s significant taste and style, that makes it unmistakably a Belgian Ale. It seems that it might go especially well with a winter-type meal like a roast, maybe a vegetable soup, or just a nice sandwich. Its very tasty and not heavy at all. Warming? Yeah, it kinda is.