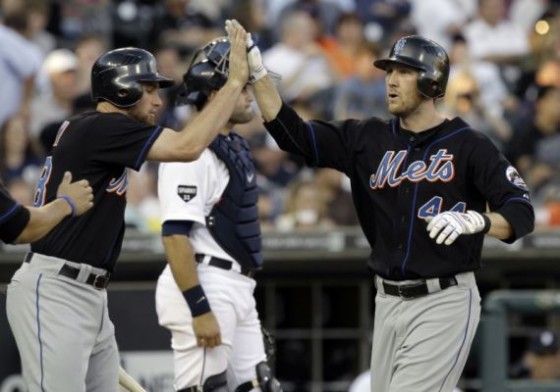 If you have been a fan of the New York Mets for the past five seasons, you’ve pretty much seen all the possible bad things that could occur to a Major League Baseball franchise from injuries to stars Jose Reyes/David Wright to horrible pitching along with the occasional managerial change. However, don’t look now but the Mets are above the .500 mark and could be a force in the NL Wild Card race for the months to come.

At the beginning of the season, some pundits believed the Mets didn’t have enough run scoring potential to make a difference in the NL East with the powerful Philadelphia Phillies and the Atlanta Braves. However, The Mets have bucked that trend by scoring 367 runs this season, putting them in the top ten of runs scored in all of Major League Baseball this season. In their past five games, they have totaled an astounding 52 runs.

The Mets offense seemingly goes as short-stop Jose Reyes goes and recently he’s been hotter than an Appalachian State music video. Reyes is currently batting .351 with an on-base percentage of .395. As many big league managers know, if the guy at the top of the line-up can get on base it sets the tone for the rest of the offense. If Reyes can continue to torrid pace, the Mets will be a team that no one wants to face at the end of the regular season.

While the Mets have big names like Carlos Beltran and Reyes, a few unsung heroes have helped them stay afloat and contributed to the offensive explosion as of late. Third baseman Daniel Murphy has filled in nicely for an injured David Wright, outfielder Jason Bay and Angel Pagan have made plays at the plate and in the field, and contributions from new faces like Lucas Duda, Josh Thole, and Justin Turner help the bottom of the order be as potent as the top. If the Mets pitching can stay a constant, this team will be tough to beat.

The Mets currently trail the Philadelphia Phillies in the NL East by more than ten games and it’s unlikely that they’ll catch them by the end of the season. The NL wild card race, on the other hand, is wide-open. If the Mets’ offense can continue this impressive pace, the sky’s the limit for this New York Mets squad.