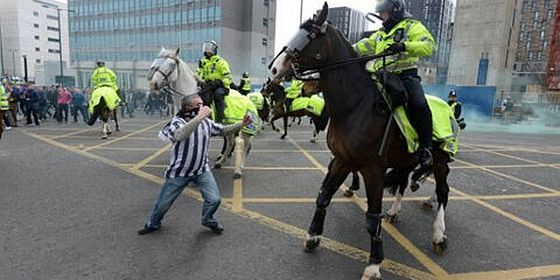 We’ve seen ill-tempered fans take out their frustration on a lot of things before, but this is a first. Rather than venting his rage on a fellow fan or inanimate object one Newcastle fan, frustrated after a 3-0 loss to Sunderland, decided to punch a horse.

Let’s repeat that, in case anyone missed it. A fan PUNCHED A HORSE. To be specific, he punched a police horse that was simply minding its own business in the aftermath of the Newcastle loss. Unfortunately for this equine pugilist, he didn’t pack quite the same punch as Mongo.