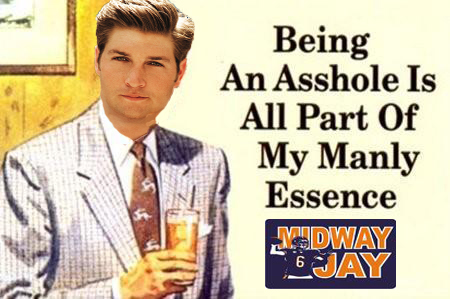 We’re almost there, kids… and the list continues to grow.

The NFL is putting a bow on the season with this year’s playoffs reaching the conference championships, and this past weekend there were more than a few playing the role of asshole – for a multitude of reasons, in a multitude of ways – and with the 1080 glow of high-definition warmth being pushing on both Saturday and Sunday, we took in every minute and made a humble list of our own.

And I suppose we can start with the aforementioned jerkface above, apparently accepted as one of the dominating choices by NFL fans as the biggest asshole in the game today…

Cutler has been tabbed as the biggest asshole in the NFL… at least that’s what you believe if you tab Rick Reilly as a worthy purveyor of such honors. If you want to accept the bias rants of the obnoxious, John Elway-hand-jobbing hand job out of Denver… then you should pull your head out of your ass and listen to me, not to Rick. I’m from Denver, I don’t have a cock wearing the #7 firmly implanted in my cheek (the cock in my mouth wears #6), and I can point fingers and play judgmental prick as well as anyone in the Mile High.

I’m telling you Cutler is an asshole, not because he gave the prison shower treatment to my golf buddies, but because he’s not doing what he’s supposed to do.

It’s a simple formula… get to the playoffs, show me where your lines are at, and I’m gonna start layin’ wagers. I look at the lines, both offensive defensive, the Vegas lines – as in the spread and the over/under (and yes, you know we love the props), and I look for weakness and bet against that team.

The Bears are notoriously atrocious on the offensive line. It’s like herpes… they keep trying to fix it and it keeps coming back, worse than the time before.

For some reason it doesn’t matter for the Bears, and while the defensive line is doing all it can to make up for the lack of ability by their offensive counterparts, its Jay Cutler that serves as that “some reason”… 15 of 28 from the pocket for 274 yards, two touchdowns, no interceptions, and his beefy 9.8 yards per was magnificent considering the weather conditions (cold as hell, snow, wind). His work with his feet in the red zone was no joke either: eight carries, 43 yards, and two more touchdowns.

That’s four touchdowns in full from Cutler. Then he went home and waxed ass on Kristin Cavallari… 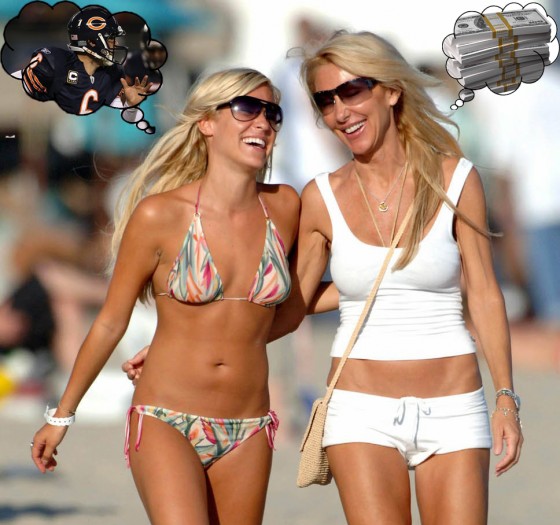 Kristin love Jay... at least he has a job.

… and THAT completes Sunday for the biggest asshole in the NFL.

He wears it well. 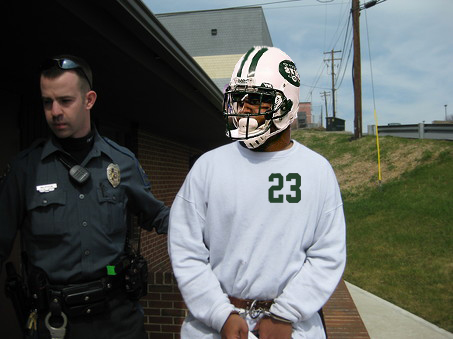 It was really a group effort but we only have one set of cuffs...

The Jets utilized the entire team to get the win over Billy’s boys in blue, and we were expecting to name a defensive player out of his game… David Harris was a fuckin’ animal (shocking, I know… 12 total tackles, nine solo, one pass defended, one hit on the passer, and one massively-influential interception) and Shaun Ellis with two sacks is screaming for attention… but in the end it was a slow, maniacal offense that put the clamps on the Patriots and put those extra possessions to use.

And when I look at the offense, I find it hard to deny Shonn Greene as the offender of choice.

The Jets have been living and dying with their defense all season long, and once again they barely edged their foot in the door for these playoffs, and once again they are pushing forward with an offense many of us questioned as the potential death of their abilities coming in. Mark Sanchez is fuckin’ hard to watch if you are rooting for this team at all… this week he was about as good as he could be (16-of-25, 197 yards, three touchdowns, no turnovers) and he can thank the rushers for insuring he had the opportunity. Greene tallied 17 carries for 76 yards (4.5 per). His contribution may seem minor, but it has proven the Jets’ method of madness during the regular season a success.

Greene earned 15 or more carries only FOUR times during the regular season. Thus far in two games that matter, he has 36 combined carries for an average of 4.1 yards per. He allows the team to limit the burden on fellow rusher LaDainian Tomlinson, he keeps the opposition honest and away from focus on the Dirty Sanchez, and he is rising to the occasion when the Jets need him most.

That puts Shonn behind the wheel. Let’s see if he kills anybody else. 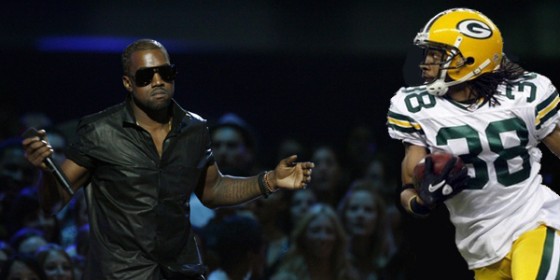 Even Kanye thinks Tramon is an asshole...

If we were to give the MVP of the playoffs away today, it would be hard to deny Tramon as the first choice that jumps to mind. You notice the numbers posted by quarterback Aaron Rodgers and you can’t deny he’s doing his part, but you can forget just how powerful the other end of that sick can be. The Packers came creeping into the playoffs with defensive gems like the Chicago Bears, the New York Jets, and the vaunted Pittsburgh Steelers seizing headlines. No one noticed the Packers were keeping the primary source of offense in today’s NFL to low numbers… touting the 5th-ranked pass defense in the land.

And even if you knew about that D you weren’t giving as much love to Tramon as you were to the legend that has been Charles Woodson (sincerely… one of the most illustrious careers none of us are talking about for this generation of the game, and probably one of the best all-around football players we’ve been lucky to see).

Tramon put that ass on notice against Matt Icy, taking him to task all day long including a 70-yard interception return for a touchdown that all but insured the Falcons would return for the second half on their heels. The Dirty Birds watched Tramon put on a show, they watched him dominate in coverage on various targets, and they failed to come up with answers in the second half when they couldn’t get the deep options open.

The Falcons ended with 186 total passing yards, they found Roddy White only five times for 57, they completely eliminated tight end Tony Gonzalez from the effort (one catch for seven yards), and they completely crumbled under the pressure of the defense. Granted, the Green Bay line deserves full credit for getting to the QB and applying pressure.

Tramon takes top bill for putting that effort to full use. 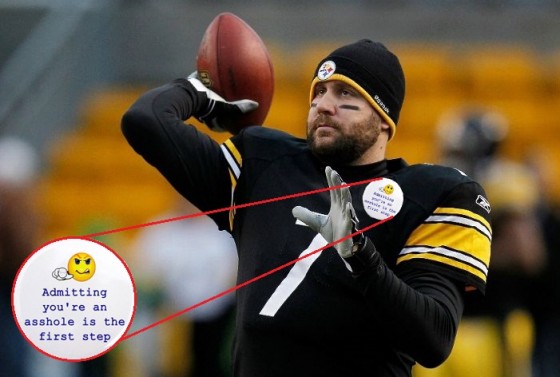 Jay's best competition at the position... of asshole.

Seriously… has anyone EVER been as charmed as The Dude?

Going to college at a Miami that isn’t in Florida… a horrendous motorcycle wreck… multiple charges of sexual misconduct and allegations of rape… it all slides off his back, just like the Baltimore Ravens slid off his back this week.

I’ll admit… I completely gave up on this game for a lil’ bit. The Ravens were kickin’ that ASS in the early going, up 21-7 at the half with a defense dominating the point of attack and an offense that seemed open to do whatever it liked. The Steelers showed very few signs of life in the first two hours of this game and Roethlisberger was getting beat the fuck up behind a patch-work offensive line.

I forgot… Ben’s been doing this since Mike Tomlin took over.

It took a spark from the defense (via fumble recovery and return by LaMarr Woodley, or I prefer to call him…

… that bad mother fucker I don’t want to meet in a dark alley) but Roethlisberger took over the second half to dink, dunk, and dive his way to another comeback effort. Rusher Rashard Mendenhall may have finished ’em off with the two-yard run for a touchdown in the fourth quarter, but he covered only ten of the forty offensive snaps posted by the Steelers in the second half. Roethlisberger led the way with another destiny-changing performance, going 11-of-14 in the third to get the Steelers in front by three (24-21). He turned just enough production in the fourth to keep it honest (including a back-breaking 58 yarder to Antonio Brown… I had no idea either, folks… lil’ fucker’s a rookie who came in from the sixth round out of Central Michigan for fuck’s sake… who coulda known?), and he turned the Ravens inside out.

Thus he continues to battle Cutler for rights as the Asshole of Season. I’m hoping they settle it in Arlington.