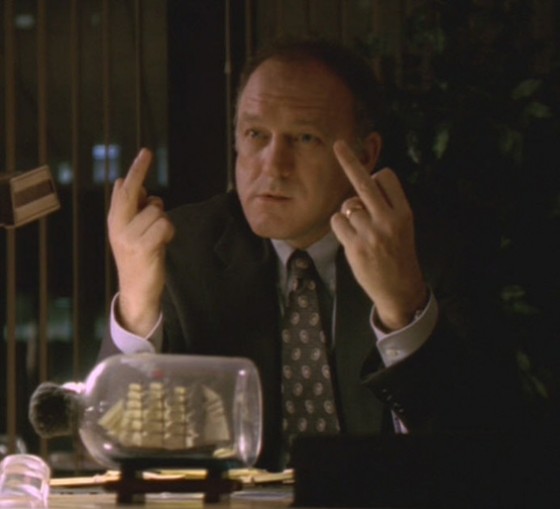 And… we’re back with more than a few assholes. I warned you to run, not walk, away from Matty Schaub at home against the Giants (16/34, 196 yards, 5.8 per attempt, zero touchdown, one interception, two fumbles, one lost, 53.1 quarterback rating… we gave you a shout to worry about Megatron (four receptions for 54 yards isn’t nearly up to Calvin Johnson pace, though a touchdown kept it respectable… as respectable as a day behind Nate Burleson with a rumored injury can be)… we’ll see on AP.

We’re reviewing the box scores on Sunday night and paying homage to our nominee for title as the biggest asshole in Baltimore television history with what we find. 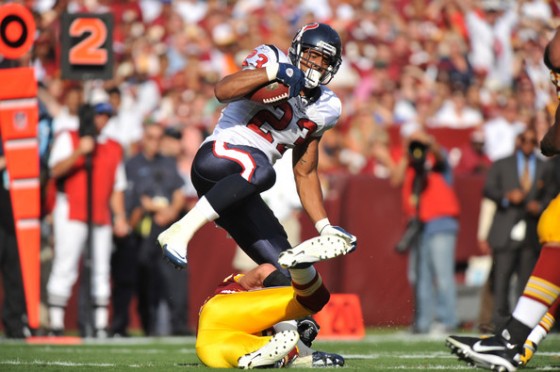 Foster had us all believing. He used 85 carries at 6.3 per to make the sale. Add 152 through the air and five total touchdowns through four weeks and some folks were ready to mortgage the house on Foster and his potential stat sheet for the 2010 season, and against the 22nd-ranked rush defense in the league being put forth by the Giants there were more than a few that did.

We should have known when word leaked Foster was possibly playing diva, coming in late and skipping meetings… instead I called out Kubiak for sitting his ass in the first quarter lack week only to watch the kid blow up for 131 in the other three. This week Foster turned around and bent us over the rail against a defense he should have torched.

It put full focus on an already-challenged Schaub (as we noted above) and now the Texans are 1-2 at home after going 4-4 in those crucial matchups last season. If the Texans are ever going to break through, they need to win at home… and Foster needs to step his ass up next week against the Chiefs.

You may think they’re a joke but the Injuns are bringing the best rush defense in the league through five weeks. 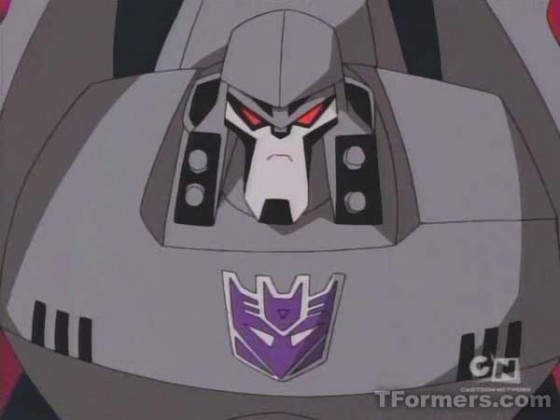 The Vikings have yet to play and with all the homoerotic scenarios setting up between Brett Favre and Randy Moss we could see a reprieve on Monday night, but in general the entire division is proving to be as horrible as predicted despite the early anticipation attached to the quarterbacks. Aaron Rodgers, Jay Cutler, Brett Favre, and even Matt Stafford were projected to entertain, stupefy, and compete this season. Most folks figured Stafford had the support to make it work while the other three were proven gunslingers with arms capable of doing damage.

Now they’re all being let down by questionable offensive lines and, worst of all, pathetic performance from their coaches and their targets.

Cutler didn’t even play (he’s still recovering from fucking your team over last week) and the Bears were scared shitless as a result, putting Todd Collins against the second-best pass defense in the league. That’s fair, but he could have thrown more than 16 passes… and he certainly should have completed more than six. Favre is going on Monday night (we aren’t expecting much against D-Revis and the Jets).

Shaun Hill is the surprise of the group, working in place of the injured Stafford to post 227 yards and three touchdowns without a single interception… he just couldn’t hit his most powerful target with consistent accuracy. In Megatron’s defense he had nine targets but converted only four receptions, and from what we know and respect about CJ without seeing the actual game (there’s no way in hell I’m wasting a Sunday watching Detroit… you and Eminem can blow me), we’re betting the blame is on Hill… but you have to wonder when he hits Nate Burleson for 4-of-6, Tony Scheffler at the same numbers, Jahvid Best at a perfect 4-of-4 and Brandon Pettigrew at 4-of-5.

Regardless, fantasy owners are probably a little disappointed, though not as upset as those touting the receivers in Green Bay.

Rodgers was facing the second-worst pass defense in the league (giving up 305 yards per game through the air) and his coach (Mike McCarthy) knew it… even tried to take advantage, throwing it 46 times, and Rodgers did his part by spreading the wealth to ALL fields and putting the rock in the hands of those that normally do something with it. Donald Lee was the only one who made good with it for six, and none of them went over 70 yards. Most figured this was the most potent crew of targets in the division, but they don’t seem to have a rock star any more.

You are a complete and total asshole, Mr. Gailey.

Thus far you’ve given Spiller, the Bills top pick in the NFL Draft and the only rookie I wanted to target in my fantasy leagues (yes, this is completely and totally personal… I WANT to use this kid on my rosters, and he’s on every damn one  ’em), with the following weekly carry totals, in order: seven, one, four, two, five. The kid has gone for 7.3 per, 5.5, per, and 6.2 per carry in his last three games, you keep getting prison raped by any and all comers, and there only light at the end of your tunnel may or may not be Andrew Luck from Stanford (if you keep your job)… and you can’t find the motivation to give the kid more carries?

30 passes for Ryan Fitzpatrick? I understand it’s one of the worst passing defenses in the game… but 30 pass attempts for a guy you grabbed off the trash heap?

Quit being such a stubborn prick and give us something worth watching. We like big joints man. I wanna get high and watch C.J. Spiller light the fucking world on fire, so give us C.J. Spiller, give him to us in large doses, and quit fuckin’ up the rotation.

The face of the game. He’s the guy you ignore other numbers for… he’s in no matter the opposition because trends will be broken and strengths will be tested (and often broken) against a player like Peyton Manning. You count on him to produce, and when you see 44 in the “ATT” column you know you should be rewarded as well as any team fielding a quarterback in the league.

This week, you weren’t. For some 244 yards is a number, in and of itself, worthy of praise. For Peyton its a sidenote to the 59.1% completion rate, the long pass of 24 yards, zero touchdowns, one interception, and a 65.0 quarterback rating. No matter how your league scores the position you’ll end up with numbers you regret with that stat line, and with Manning it’s crushing.

It’s only his second interception thus far and it certainly seems like it should be nothing more than a bump in the road with the schedule Indy will face moving forward (@ Washington, bye week, Houston… the two worst passing defenses in the game) and the return of Pierre Garcon (he played rather well in his first action of the season), but for Week 5, it earns Manning rank as the most offensive and insulting asshole of the week.