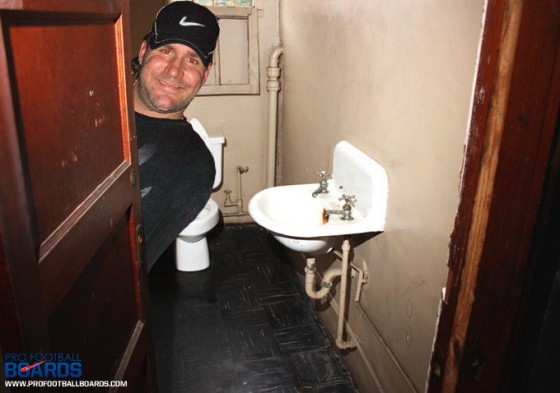 I’m not so sure Bigger-than-Favre Ben – at least that’s what I hear – isn’t more douche than asshole… but he may be both. The Steel City was quick to pass along story of him acting every bit the prick during the pre-bathroom days, and today he reminded the world that while the Steelers can win without him, they sure look better doing it with him.

Whatever… he’s the story of the day with a statement in return and thus he’s our poster-boy asshole of the week.

I’m a day late and more than a few dollars short because of these assholes. Let’s get to it.

You may or may not have started Kolb in fantasy leagues… we had to play the “I’m ok, you’re ok, we’re ok” dance all week with Vick all week long as his desire to go postal against his former employer played out in the headlines. It wasn’t much fun and it may have driven some of you away.

That doesn’t fall on Kolb. If you want to point the stink finger at Vick on that one, fine. Either way you were looking at an Atlanta defense with 11 interceptions versus only eight passing touchdowns surrendered, you should have been looking at the surrendered 81.7 QB rating this set was claimin’, and you were pushing back from the table of brotherly love and pondering other options.

Not only did Kolb come out and light ’em up (79.3% completion rate had Andy Reid at full chub… not that he’d know it or be able to confirm… hasn’t seen it in year) but he gave the entire NFL-obsessed world their topic of choice for the week. Now we have the full-fledged quarterback controversy we’ve craved for weeks.

Max Hall versus Matt Leinart versus Derek Anderson… Jimmy Clausen versus Matt Moore… Jason Campbell versus Bruce Gradkowski… Alex Smith versus whoever is not Alex Smith… Jay Cutler versus brain damage… Brett Favre versus erectile dysfunction… THESE are the quarterback debates we’ve been blessed with thus far. It’s been allsum… we actually get to concentrate on the game. Kolb has ruined the silence. Asshole.

Well… to be fair, there is one other bullet point the heads in sports radio will focus on first.

Understand, like Kolb, I’m not necessarily putting the title of “asshole” on the names above. I’m putting them on all the heads that came in reaction… THIS will be the hot-button topic of the week and I’m already sick to fuckin’ death of it.

This is football. You’re taking the most massive athletes in professional sports, you are giving them the most advanced technologies and regiments to maximize strength/speed/agility/accuracy/reaction, and  you are cutting them loose on the field with orders to hit early, hit often, and hit hard.

The hit by Meriweather… (there would be a video here but hey… this is the NFL)… not good. If you have seen it you know it could be used as textbook clip during the rookie symposium on how NOT to meet the receiver on such a play. He launches, his arms are down, and he’s leading with the head. True Rodney Harrison style.

The Beast took two concussions on the window…

… both as vicious as the ringer put forth by Meriweather. However, Harrison’s a seasoned vet and he put ’em down in a way that, under review, looks clean. He’s not launching (he’s following through and charging with momentum… which, to be honest, seems worse), his hands are up and somewhat in use, and you can argue he’s not leading with the head… it just happen to be in the right place at the right time.

Funny how that keeps happening to Harrison. I want him on my team right now. I might put him on my fantasy team just to increase the testicular fortitude of my squad… I’ll petition the league to list him as an option at tight end.

Here’s the thing. We LOVE those hits.

I grew up watching those hits. Those hits have been sold time and again by the league, by the Worldwide Leader, by every pigskin-focused blog on the planet. They are called “highlights” for a reason.

In Week 6 these three guys brought ’em and got their money’s worth… and now the hypocritical assholes of the league and media machines turn to do the same and we have to sit and suffer through it all.

(Don’t get me wrong… I am aware of the situation at Rutgers and the tragedy of it all, and we are forced to be aware of the inherent dangers of the job. It’s woeful and sad… but that’s the job. I work in the streets all damn day doing construction, and if some drunken dickwad decides to ignore the cones and run us all over then well… that’s tragic, but it’s part of the job. If I didn’t want to deal with it I should have been a fuckin’ ditch digger. If you don’t want to submit yourself to massive head trauma and potential paralysis, you shouldn’t be putting on pads and playing football… especially not with James Harrison). 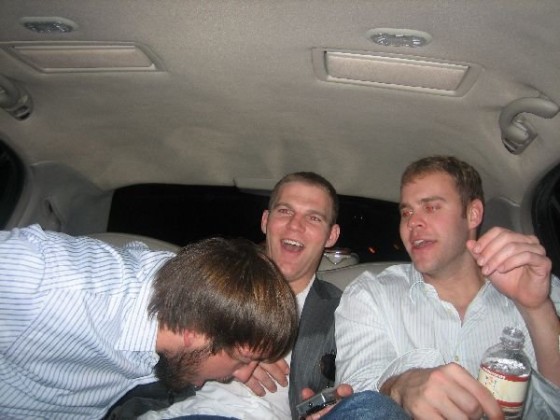 Through six weeks of violence Orton is averaging 41 pass attempts per game, on pace to post around 660 total pass attempts through the regular season. The single-season record was set by the great Drew Bledsoe in 1994, heaving 691 pass for a team that finished 10-6 with a loss in the wild-card round against the Cleveland Browns (yes, the Cleveland Browns coached by Bill Belichick… it’s M.Night Shamalamadingdong shit, I know).

That team was almost as awful as this year’s Denver Broncos, or the 1995 Pats that rank fifth on that same list of single-season pass attempts. If the Neckbeard keeps up his current pace he could make the top three on that list… and based on the numbers and Orton’s apparent love for limo head, it may be the only note of fame he gets for the effort.

Orton may be throwing a ton but (a) his team is losing, falling in heartbreaking fashion, 24-20, against the Jets in front of the hometown fans on Sunday, bringing the Donkey to 2-4 on the season, and (b) he’s falling off… the 41.1% completion rate was horrific, 25 full percentage points lower than his completion rate (66%) through the first five… the resulting 209 yards was his worst performance thus far, in a game when anything better would have brought in impressive, statement win… and we’ve already accepted he’s all the Broncos have (touting the worse rushing offense in the league averaging 67.3 yards per game, on pace to challenge other not-so-positive NFL marks).

Fantasy owners were just starting to buy in. Mile high locals were enjoying medical-grade smoke and buying in. Everyone was willing to accept the occasional homoerotic scandal and the weird Darwin-inspired facial hair so long as this team, a team clearly in the midst of reconstruction, could still find a way to compete in the worst division in professional sports.

The Week 6 loss against the Jets and Neckbeard’s inability to head it off (HEAD it off, get it?) didn’t help. If he had thrown with any semblance of accuracy the Broncos could have avoided leaving the game to the refs. He would have had the numbers for your fantasy squad as well, and if you bought in thinking the only source of offense found in Denver could and would take advantage of injured Darrelle Revis and the most overrated pass defense in the league (ranked 25th in the league coming in, now ranked 22nd), consider yourself punked.

The big dog of the week comes, like the others listed above, comes with an asterisk. Jones has always been and will always be an asshole. I doubt few in Dallas would contend. He gets hammered and mouths off in front of a bunch of kids about Parcells saving him from the Chan Gailey era. He builds the world’s biggest Fleshlight and proceeds to fuck every fan in town with $18 beers, $100 pizza, and double that to stand and watch the game on TV (and he’s getting a fucking SUPER BOWL at this place… some of you almost sound sorry for Jerry because it won’t be a home game, like he’s now destine to financial ruin for hosting the Super Bowl). He hires the biggest dipshit available on the market, he surrounds him with the next head coach in training, and he proceeds to make every damn decision that comes along the way.

Jerry Jones built this team – he’s responsible for every player on the field and every dollar spent to get them to 1-4 – and everyone in the world is screaming for Wade Phillips… and THAT is why Jerry is the biggest asshole of the week.

I screamed at Wade in Week 1 and gave it up. I don’t think these guys need to review lessons like “Hey, let’s not get 10 penalties this week” or “The touchdown celebration almost cost us one game so let’s not go apeshit again this week”… Wade may be stupid but you don’t have to be smart to think those things don’t need to be said.

That is where credit for this debacle lies… with the biggest asshole in the room.